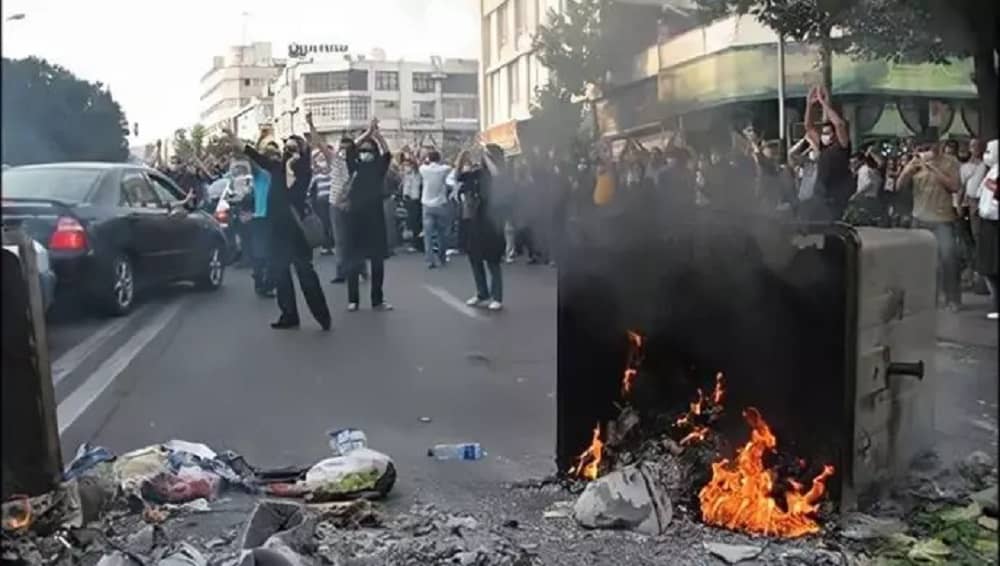 “Beware of the day we become armed,” cried the youth in response to opening fire at the demonstrators in Tehran

On Monday, September 26, on the 11th day of the nationwide uprising of the Iranian people, despite the brutal suppression and complete shutdown of the Internet, people in dozens of districts in Tehran took to the streets and confronted the regime’s suppressive forces. They included Sattar Khan, Marzdaran, Sazmane Ab, Punak, Kamali junction, Geisha, Tehran Pars, Saadat Abad, Amir Abad, Yousef Abad, Shahrak Omid, ShahrAra, Niavaran, Damavand Street, Narmak, Chahar Divari, Haft Howz, Chitgar, and Ekbatan. In some districts, the suppressive forces opened fire on demonstrators. In Narmak and Sattar Khan, the youths clashed with the suppressive forces.

By setting fire in many parts of Tehran, the demonstrators blocked the roads to prevent the movement of repressive forces. In many places, the rebellious youth attacked the gatherings of repressive forces and their vehicles with Molotov cocktails and forced them into retreat. In response to opening fire and hurling tear gas by the IRGC, the rebellious youth chanted, “Beware of the day we become armed.”

Demonstrators chanted, “Death to the dictator,” “This year is a year of sacrifice. Seyyed Ali (Khamenei) will be overthrown”, “All these armies have come together to target the leader,” “We will not return home until we make a revolution” and “We are fighting men and women; fight, and we fight back!” Last night, slogans of “death to the dictator” and “death to Khamenei” could be heard from the windows of houses and rooftops in many areas of Tehran.

On the 11th day of the nationwide uprising, in many cities, including Yazd, Mashhad, Tabriz, Bandar Abbas, Lahijan, Qom, Qorveh, Sardasht, Marivan, and Sosangard, people took to the streets and confronted the repressive forces. In Mashhad, despite the heavy presence of the armed agents, people protested and confronted the repressive forces and plainclothes agents in at least five districts.

In Tabriz, demonstrations took place in many districts, including Rushdieh town and Shahnaz junction. Demonstrators chanted, “No to Shah, no to Mullahs, People, People.” In Mehrshahr Karaj, people chanted, “Death to the oppressor, be it the Shah or the Leader (Khamenei).” In Qorveh, a large crowd of people chanted, “Death to Khamenei, I will kill whoever killed my sister.” In Marivan, a large crowd chanted, “Iranians die but will not accept humiliation.”

In Tehran and many other regions of the country, the clerical regime has shut down the Internet or slowed it down to prevent the spread of the uprising and its news.

Last night, Mrs. Maryam Rajavi, the President-elect of the National Council of Resistance of Iran (NCRI), said courageous women and youths took to the streets in Tehran and other cities for the 11th day. The nationwide uprising has expanded to 154 cities. 200 have been killed, 10,000 arrested. By highlighting that the unjustified bloodshed would enhance the uprising and strengthen the determination of the rebellious youth, she urged the international community to take urgent action to free those detained.