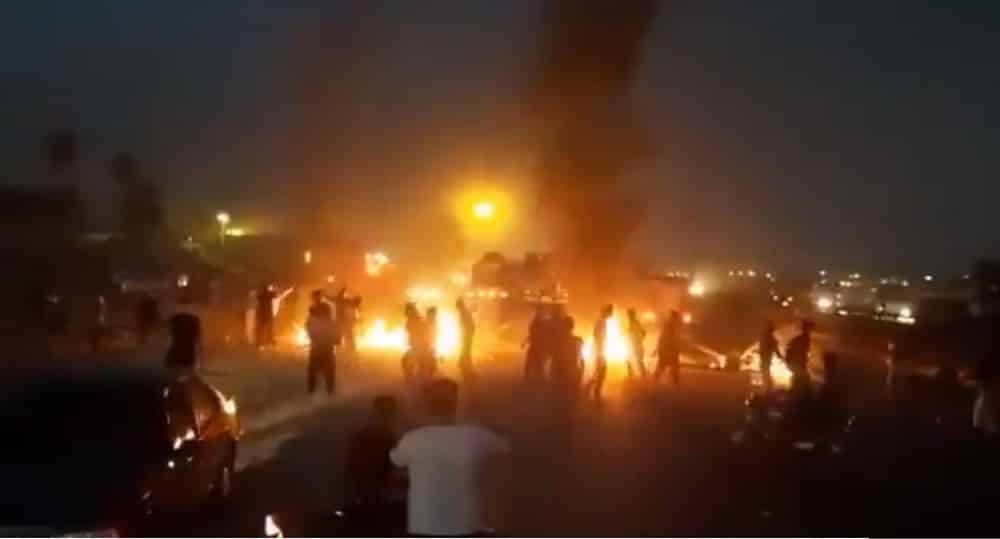 Iran protests for water – No. 2

The widespread protests and uprisings in different cities of Khuzestan Province (southwest Iran) that started on Thursday night due to water shortage, also continued on Friday night. The protesters and the defiant youth in Ahvaz and surrounding towns closed transit highways for hours.

Despite the full mobilization of the State Security Force (SSF), the enraged residents in Hoveyzeh, Susangerd, Abu Homeyzeh, Shadegan, and Ein-do alley took to the streets to protest the lack of water and challenged the SSF and the Basij militia that were trying to disperse them. The protesters chanted “We will not accept humiliation.” They carried banners that read: “We will never give up, we want water.” The protesters also set fire to tires blocking the transit highways, including, the Ahvaz-Shush Expressway, Ahvaz-Andimeshk highway, the transit highway in Abdul Khan area, Seyed Abbas, Ahvaz Sayahi alley, the main highway at the entrance to Shadegan, and the main Kut Abdullah highway.

Terrified of the spread of the popular uprising, the suppressive forces opened fire on the protesters in many areas and fire teargas to disperse them. During Friday night’s protests, the IRGC shot to death one of the protesters, Mostafa Na’imavi, 26, in Shadegan (Fallahiyeh), and wounded several others.

Mrs. Maryam Rajavi, the President-elect of the National Council of Resistance of Iran (NCRI), saluted the arisen people of Ahvaz and Khuzestan Province who, in dire need of water and freedom, have come to the streets and chant ‘we will not accept humiliation.’ Mrs. Rajavi called on all youths to rush to the aid of the
people of Khuzestan, especially those wounded. She said that opening fire on unarmed residents and the martyrdom of a young man in Shadegan again demonstrated that as long as the plundering mullahs remain in power, poverty, unemployment, and disease will continue. The mullahs deny the people water, power, bread, housing, and vaccines to provide for the unpatriotic nuclear and missile projects and their warmongering in the region.

Secretariat of the National Council of Resistance of Iran (NCRI)
July 17, 2021