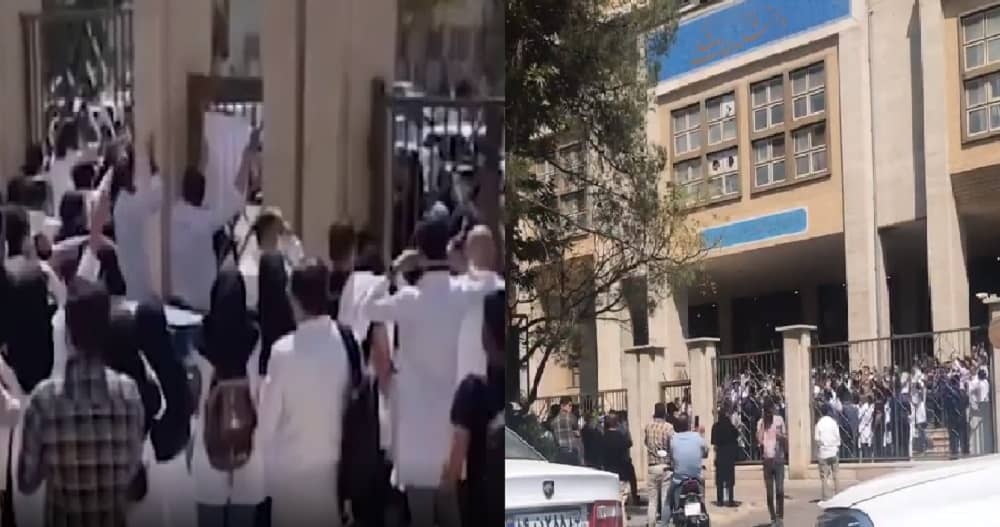 Spread of uprising to 162 cities, the unannounced curfew in many cities

On the 12th day of the nationwide uprising, on Tuesday, September 27, dozens of districts in Tehran and many cities across Iran were scenes of demonstrations and clashes between the youth and the suppressive forces despite the mobilization of repressive forces.

The rebellious youth confronted herds of Revolutionary forces (IRGC), State Security Force (SSF), and intelligence agents in Chabahar, Shiraz, Ahvaz, Karaj, Gohardasht Karaj, Oshnavieh, Sanandaj, Yazd, Sabzevar, Shahr Jam, and Asalouye, etc. The uprising continued while many cities like Rasht were under an undeclared curfew, and the internet was completely cut off in many places. In the last 12 days, the nationwide uprising has spread to 162 cities across Iran.

On September 27, 2022, the state news agency quoted the secretary of the State Banks Coordination Council as saying, “During the unrest of recent days, 17 bank branches across the country caught fire, causing at least 4,000 billion rials in damage.”

In Tehran, in different districts such as Pirouzi, Sattar Khan, and Pounak, the first, second, and fourth squares of Tehran Pars, Shahrak Omid, Amirabad, Abdul Abad, Narmak (Sarsabz), Resalat, Keshavarz Blvd., Valiasr, Nezam Abad, Farmaniye and Ekbatan, the demonstrators confronted the repressive forces. They chanted, “This year is a year of sacrifice. Seyyed Ali (Khamenei) will be overthrown”, and “Death to the dictator.”

The sound of gunfire could be heard in some areas, especially in Tehran Pars, for a long time. In Madain Street, the youths attacked an ambulance used to transport those arrested and freed the eight protesters. The rebellious youth set fire to the Basij base in Nezamabad and the vehicle of the SSF in Abdul Abad. In Narmak, suppressive forces attacked the people with shotguns. In Sattar Khan, despite the heavy presence of the regime forces, the chants of “death to the dictator” continued. In many areas of Tehran, slogans of “Death to Khamenei” echoed from windows and rooftops for hours.

Last night, Chabahar was the scene of demonstrations, fighting, and clashes with the repressive forces for hours. Protesters burned down the local governor’s office and its Kiosk in Chahbahar in protest against the rape of a 15-year-old Baluch girl by a colonel in the State Security Force (SSF). Several people were injured or killed.

In Gohardasht and the second district of Karaj, repressive forces opened fire on demonstrators with shotguns. Demonstrations took place in Karaj Baghestan, where the protesters chanted, “Death to Khamenei” and “Death to the dictator.” In Mehrshahr, Karaj, youths targeted two motorcyclists of the suppressive forces with Molotov cocktails. In Anzali, groups of rebellious youths hurled Molotov cocktails at the motorcycle riders of the special unit who were attacking the demonstrators.

In Afifabad, Shiraz, the suppressive forces targeted and opened fire on two demonstrators. Demonstrations and clashes with the repressive forces took place in Jam and Asalouye cities in Bushehr province. In Sanandaj, despite the firing of tear gas, nightly protests with the slogan “Death to the dictator” continued. In Yazd, the youth blocked the roads of the regime’s agents and continued their massive night protest. In Ahvaz, Naderi junction, the youths were fighting and running away from the SSF and continued their nightly demonstrations.