Iran: Uprising in Sanandaj and Demonstration in Tehran University in Protest To Heinous Murder of Mahsa Amini 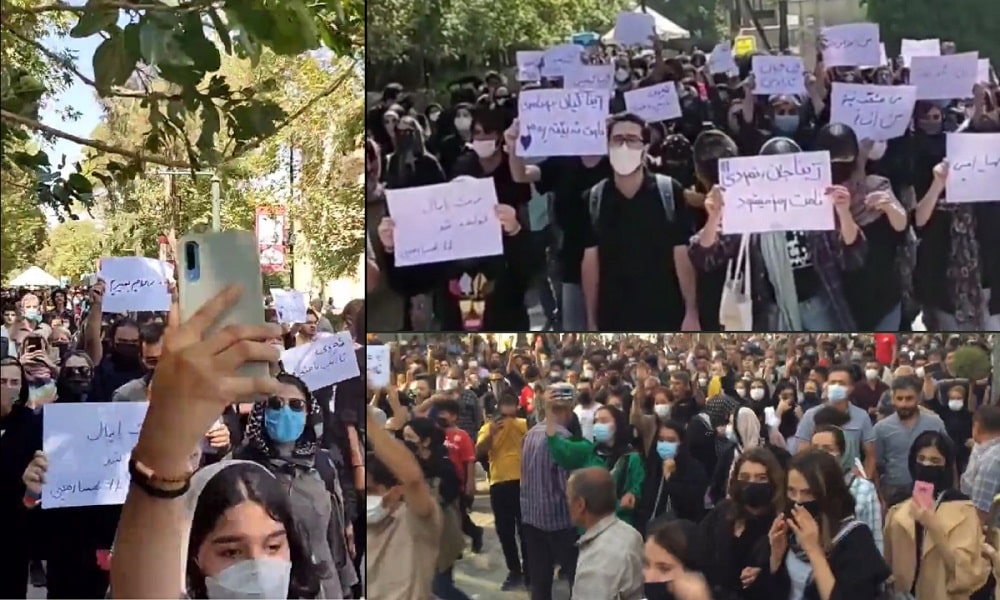 Saqqez residents started their protests and demonstration in the early hours yesterday, September 17, and continued until late at night. Regime agents prevented cars from entering and leaving Saqqez. Repressive forces riding motorcycles equipped with anti-riot gears attacked people and fired bullets and tear gas. Several demonstrators were arrested and at least 10 people were wounded. Women had a significant presence in the protests.  Chanting “Death to Khamenei”, demonstrators hurled rocks at Khamenei’s picture and set it on fire. They confronted the criminal agents while chanting “Death to the dictator”, “shame on you, shame on you!”, “I will kill whoever killed my sister”, and “martyr never dies”.

On Saturday evening, the people of Sanandaj rose up and took to the streets, chanting “Saqqez is not alone, Sanandaj is supporting”, “Sanandaj supports Saqqez”, “Death to Khamenei”, “Death to the dictator”, and “I will kill whoever killed my sister”. Repressive forces attacked the demonstrators by firing tear gas and opening fire. In turn, people confronted them by blocking the road and hurling rocks and tearing down regime banners and posters of Qassem Soleimani. A number of demonstrators were wounded, and several people were arrested. Despite the severe crackdown, the people of Sanandaj continued their uprising throughout the night.

To prevent the spread of protests, the mullahs’ regime disrupted the internet in Saqqez and Sanandaj and cut it off in some areas.

Mrs. Maryam Rajavi, the President-elect of the National Council of Resistance of Iran (NCRI), saluted the arisen people of Saqqez and Sanandaj and Tehran University students, who protested against the murder of Mehsa and chanted, ” Iran is blood-soaked, from Kurdistan to Tehran”. She said that brave women and youths are standing up against the mullahs’ suppression. Khamenei, Raisi and other leaders of the regime must be held accountable for four decades of bloodshed and crimes against humanity. All these bloodlettings will turn into a flood that will end the religious dictatorship forever.

Mrs. Rajavi called on the upcoming session of the United Nations General Assembly to take immediate action on the atrocities of the Iranian regime against women and emphasized that the dossier of crimes of this regime should be referred to the Security Council and its leaders should be brought to justice.