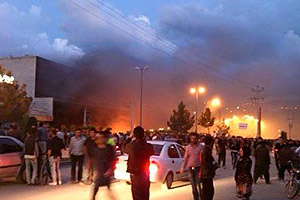 The Iranian Resistance calls for solidarity and support of Iranian people with the Kurdish people, especially with the valiant youth of Mahabad
Call on international bodies to stop the arrests and secure expeditious release of arrestees

NCRI – Continuing with their heroic uprising, the valiant people of Mahabad raided the office of the Iranian regime’s Ministry of Information and Security on Thursday, May 7.

They also set fire to pictures of Ali Khamenei and Khomeini in various areas of the city and clashed with the anti-riot forces. This uprising bagan in protest to the death of Farinaz Khossravani, 26 year old Kurdish woman, who on May 4 jumped off the fourth floor of the hotel where to protect herself against being abused by an intelligence agent.

The demonstration that began on Thursday afternoon, led to extensive clashes between the people and Iran’s elements as the suppressive forces brutally attacked people and fired tear gas and BB bullets injuring dozens. The angry crowd shouted anti-government slogans such as “death to Basij forces” and “death to the dictator” as they clashed with droves of suppressive forces. They also chanted: “My sister Farinaz” There are many postings on the social media titled: “I am Farinaz”

As the clashes escalated, the antihuman clerical regime resorted to extensive suppressive provisions in the city of Mahabad. The number of arrests that until the late hours of Thursday had reached 60 increased and spread in early Friday morning hours. The IRGC forces and the intelligence elements are arresting scores of people in the city or in their raids on houses, transferring the arrestees to Orumiyeh in buses. A number of the arrestees have been transferred to prisons in Miandoab and Naqadeh.

The special anti-riot forces, IRGC forces, Intelligence agents, and Basij forces that droves of whom have been dispatched to Mahabad from Miandoab, Orumiyeh and Naqadeh are keeping a considerable presence in the city and have imposed an undeclared curfew. They prevent any gathering of people, especially in the central areas of Mahabad. All commute to and from Mahabad is also being controlled at the city’s entrance points.

The Iranian Resistance calls for support and solidarity of all Iranians with the Kurdish people against the religious tyranny ruling Iran and emphasizes on the need to help the valiant people and youth of Mahabad. It urges the international human rights bodies to take swift and effective action to force the criminals ruling Iran to stop their suppression and arbitrary arrests in Mahabad and to immediately release all those detained.

Secretariat of the National Council of Resistance of Iran
May 8, 2015

Previous articleIRAN: Maryam Rajavi hails people of Mahabad for their uprising against the regime
Next articleUN condemns surge in executions in Iran