IRAN: Maryam Rajavi hails people of Mahabad for their uprising against the regime 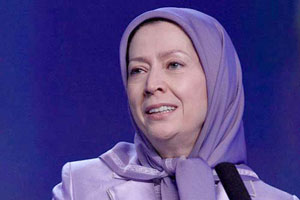 NCRI – The Iranian Resistance’s President-elect Maryam Rajavi hailed the courageous people of Mahabad who staged an angry protest against the death of a young woman in their city and gave a big lesson to the clerical regime and its intelligence agents.

Farinaz Khosravi, 26, lost her life while defending herself against the assault of an intelligence ministry agent.Mrs. Rajavi extended her deepest condolences and sympathy to Ms. Khosravi’s family, describing her as a brave and honorable woman.

She lauded the residents of Mahabad for their act of protest and called on the Iranian public and youth to rise up in support.

Mrs. Rajavi said: The misogynous clerical regime and all its corrupt hirelings and mercenaries seriously fear the people of Iran and cannot do anything when confronted with their determination.
She urged Iranian women and youths to rise in protest against the assaults of the regime’s agents, particularly on honorable women and girls. She stressed that they should not allow the lives and pride of Iranian youths be victimized in such egregious crimes.
Mrs. Rajavi hailed the martyrs of Kurdistan and wished recovery for those wounded in this demonstration and asked the populace to rush to their aid.

Secretariat of the National Council of Resistance of Iran
May 8, 2015