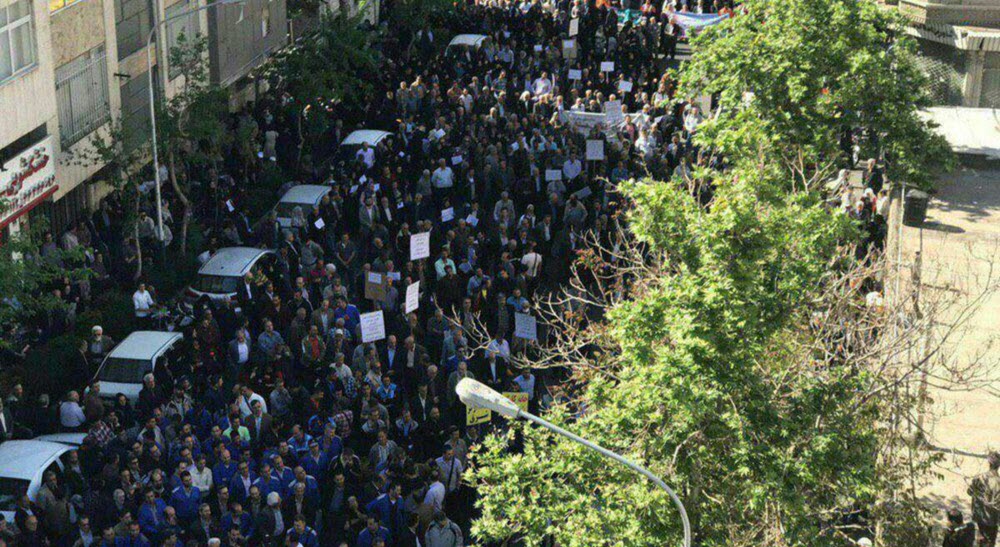 A big number of workers, deprived and plundered individuals gathered today May 1, the World day of Labour, in front of the mullahs’ parliament chanting slogans “Workers, teachers, students, unite, unite”, “High prices, inflation, our people’s plague”, “Government traitor, parliament supporter”,” Our pain is your pain, O people join us” and “Down with the worker, hail to the oppressor” to protest against anti-worker policies of the mullahs’ regime.

Repressive security forces as well as special guard units attacked the demonstrators and beat them and arrested tens of protestors. The public changed their slogans to “Shame on you, shame on you” and “Don’t be afraid, we are all together” in order to face the attackers.

Similar protests and demonstrations were held by workers and deprived in a number of other cities like Mashad and Marivan with anti government slogans.

Mrs. Maryam Rajavi, president-elect of the resistance hailed the protesting workers and demonstrators calling the public especially the youth to their support, urging the condemnation of anti-worker policies of the mullahs’ regime by international bodies in defense of human and workers’ rights and asking for urgent action to release those arrested.

Insisting that the usurped rights of workers would be restored by a struggle against the totality of the anti-worker regime, Mrs Rajavi added: “In spite of pressures and anti-worker policies of the mullahs’ regime, workers and toilers of Iran will neither rest nor surrender; they have shown as much with their protests and uprisings over the past year. They can rely on the ongoing support and solidarity of women, youth, students and all the disenchanted sectors of Iranian society. “