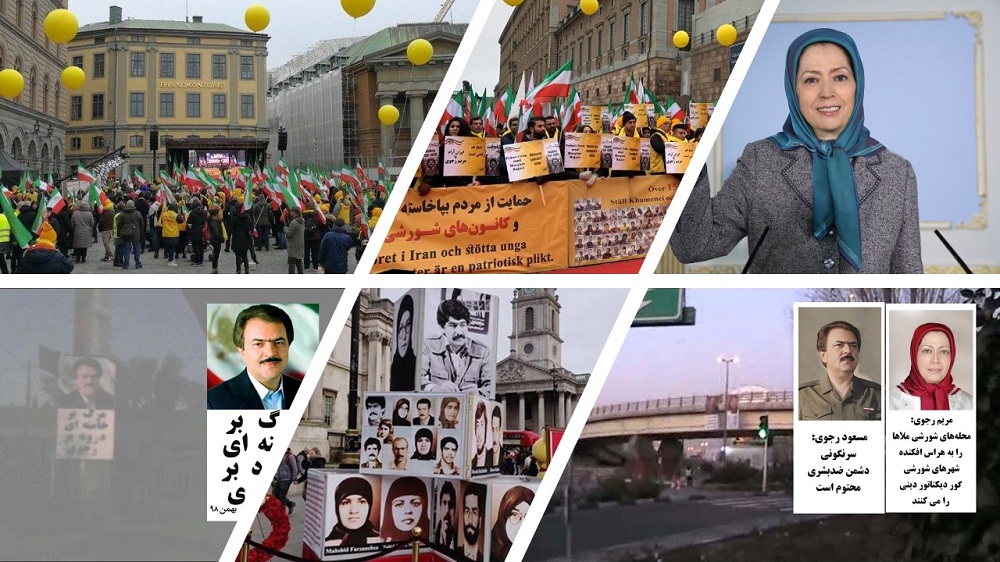 MARYAM RAJAVI: VICTORY AND STAYING POWER IS THE INALIENABLE RIGHT OF THE IRANIAN PEOPLE

On the eve of the anniversary of the anti-monarchic revolution, Iranians staged a major campaign against the ruling religious fascism and for freedom across Iran and in different countries around the world.

Inside Iran, Resistance Units posted messages and pictures of Mrs. Maryam Rajavi, the President-elect of the National Council of Resistance of Iran (NCRI), and Mr. Massoud Rajavi, the Leader of the Iranian Resistance, in different parts of Tehran, including in Jalal Al-Ahmad Expressway, Parkway, and Damavand, as well as in the cities of Shiraz, Tabriz, Rasht, Mashhad, Ahvaz, Gachsaran, and Karaj.

The banners read, “My vote: regime overthrow,” “Overthrow of the inhuman regime is certain,” “Rebellious neighborhoods have frightened the mullahs,” “Rebellious cities will uproot the religious dictatorship,” “Long live the PMOI/MEK, death to oppressor, be it the Shah or the Leader (Khamenei),” “Flowers have blossomed from the blood of the martyrs, “Down with Khamenei, long live Rajavi,” and “Whether January or November, our fight will be in the streets.”

Simultaneously, thousands of Iranians in Washington, DC, London, Rome, Toronto, Stockholm, Geneva, Brussels, and Oslo staged rallies and marches on February 8 and 9, 2020. In condemning the mullahs’ atrocities, they voiced support for Resistance Units and defiant youth inside Iran. They also urged the international community to stand with the Iranian people’s desire to overthrow the ruling theocracy. They further called on the United Nations to dispatch a fact-finding mission to Iran to visit the prisons and assess the state of thousands arrested during the November 2019 uprising.

Mrs. Maryam Rajavi, the President-elect of the National Council of Resistance of Iran (NCRI), said in a video message to the rally, Khomeini stole the leadership of the anti-monarchic revolution and put in place the mullahs’ rule instead of people’s sovereignty. For over 40 years now, our nation has been under the occupation of criminals that have generated a record replete with corruption, theft, destruction, death, and export of terrorism and warmongering. Dictators, both the Shah and the Sheikh, believe that they are entitled to a lifetime of dictatorship. That is why they recognize no bounds when it comes to shedding the blood of innocents.  But our people have always been rebellious towards and refused to surrender to, the ruling religious fascism. They have not ceased the struggle for freedom even for one day. The more than 1,500 martyrs of the November uprising, and the 120,000 executed political prisoners all champion the same message: The Iranian people deserve freedom, democracy, and equality and are paying the price to achieve it.

Mrs. Rajavi called on the international community to refer the dossier of the regime’s crimes to the United Nations Security Council, to act to secure the release of those arrested during the uprising, to adopt a firm policy in the face of the regime’s human rights violations, terrorism, and warmongering in the region, and to recognize the rights of the Iranian people to overthrow the religious dictatorship ruling Iran.

Previous articleThe Iranian Regime’s Situation in the Past Year
Next articleLatest News in Brief- February 10, 2020