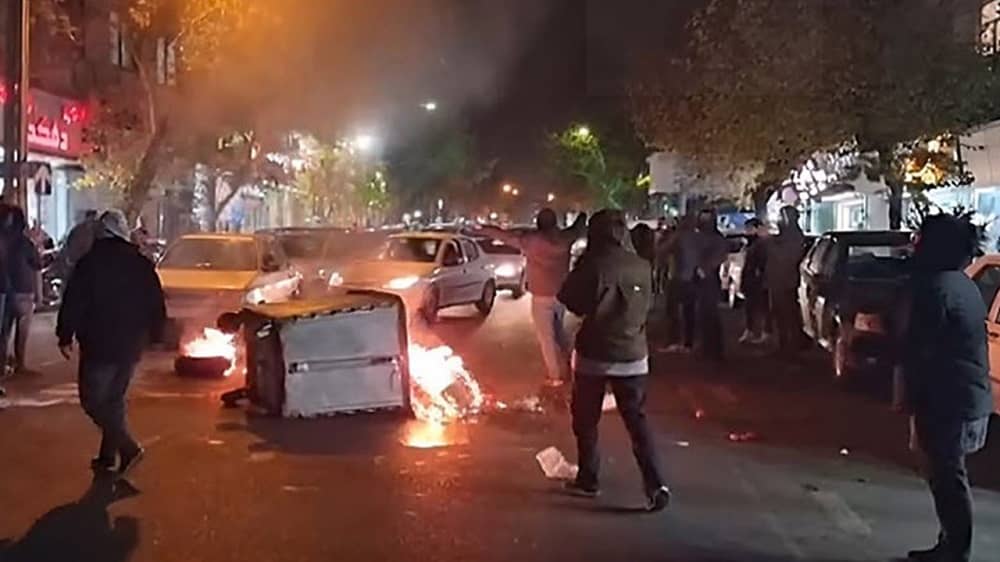 On Tuesday, December 6, on the 82nd day of the uprising and the 2nd day of extensive bazaar strikes and university sit-ins and protests, a commemoration ceremony for the martyrs of the uprising was held in Anzali and Mahabad. Students at Sharif University turned the speech of Alireza Zakani, Tehran’s Mayer, into an anti-government protest by chanting “Death to Khamenei.” The science and technology students also disrupted the speech by Ebrahim Raisi’s government spokesperson, Ali Bahadori Jahormi, by chanting, “Shame on you, Shame on you.”

In Anzali, suppressive forces attacked locals who had converged to pay homage to the slain Mehran Samak. People expressed their protest by chanting, “Death to Khamenei,” “Death to the dictator (referring to Ali Khamenei),” “This year is the year of sacrifice; Seyed Ali (Khamenei) will be overthrown,” “Pledge to our fallen comrades, we remain steadfast to the end!” and “I will kill whoever killed my brother.” The regime’s agents shot at the crowd with tear gas and shotguns.

In Mahabad, locals paid their respect to six martyrs, Kobra Sheikheh, Fereshteh Ahmadi, Samko Mowloudi, Shahu Khezri, Zaniar Abubakri, and Masoud Ahmadzadeh, on the 40th day of their martyrdom. People chanted, “Death to the dictator (referring to Ali Khamenei),” and “Martyrs never die in vain.” In Saqez, on the 40th day of Fereydoun Farrokhi’s martyrdom, the crowd yelled, “The martyr is alive,” and “Fereydoun is a hero; he is a martyr of Kurdistan.” Residents of Amol (Northern Iran) also commemorated Ali Fazeli on his 40th day of martyrdom.

On Monday, December 5, and Tuesday, December 6, in Bushehr, Karaj, Shiraz, Qazvin, Bandar Abbas and Quds city of Tehran, defiant youths attacked infamous Basij bases by throwing Molotov cocktails. They also set fire to a Basij base in Mashhad, the regime’s public scrutiny office in Ilam, the site of one of the regime’s agents in Saqez, and the clerical regime’s Propaganda Department in Yasuj. Defiant youths destroyed and set on fire the banners depicting Ruhollah Khomeini, Ali Khamenei, and Qasem Soleimani (former commander of Qods force), and a banner of paramilitary Basij force in the cities of Yazd, Shush, Falavarjan, Isfahan, Eslamshahr, Urmia, Bandar Abbas, Dezful and Karaj.

Simultaneous with students’ protests at the universities, one of Tehran’s school girl students staged their protest by chanting “Death to the child-killing government.”