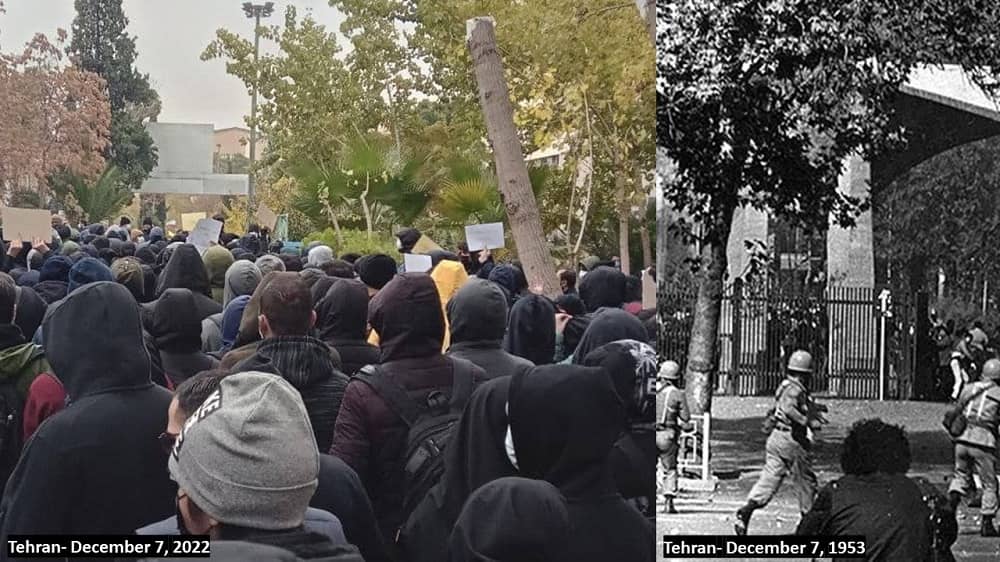 Following a series of calls by university students, protests and strikes spread across Iran on December 6. These calls to protest for three days, from December 5 to 7, were made on the anniversary of Iran’s national University Student Day on December 7, honoring the student movement which began during the Shah’s dictatorship.

Since the beginning of Iran’s nationwide uprising in September, following the tragic death of a young Kurdish girl accosted by the police, Iran’s university students have been playing a leading role in organizing protests and protecting the democratic nature of what many consider Iran’s democratic revolution by rejecting any form of dictatorship. This became evident when they first chanted, “Down with the oppressor, be it the Shah or the leader.”

While the regime tried to spread despair in public through violence and propaganda, brave Iranian university students chanted, “It is no time for grief, but the time for the fight,” thus motivating Iran’s restive society to continue its struggle for freedom.

According to MEK reports, out of 141 public universities in 31 provinces of Iran, 124 universities have been holding protests and strikes. Members of the MEK’s Resistance Units actively organized and participated in demonstrations in universities across the country, playing the role of the uprising’s trailblazers.

These demonstrations continue despite the regime’s heavy crackdown. The clerical regime has desperately tried to stifle any voice of dissent in the university using various methods, including violent beatings and arbitrary arrests.

Yet, these arbitrary mass arrests have not hindered Iran’s student movement from continuing.

Countless students &teachers have been detained &executed from the 1980s to 2020s, but the blood-drenched commitment to overthrow the mullahs’ regime was passed from one generation to the next, energizing the movement that seeks to topple the regime #Iranhttps://t.co/h6EW9BLR6m pic.twitter.com/jeC7WWQLu3

Beginning in the 1950s, Iran’s university student movement has been a serious challenge to the dictatorship. Hosting the country’s most intellectual stratum, the university has been the cradle of revolution and dissent in the past century.

On December 7, 1953, Shah’s security forces opened fire on protesting university students in Tehran, killing three young men.  This event, known as the 16 Azar incident, has been commemorated by university students and people in the form of protests against the ruling establishments.

Sensing the danger of Iran’s university students to his grip on power, Ruhollah Khomeini, the clerical regime’s founder, launched a brutal crackdown across all universities under the banner of the so-called “Cultural Revolution.” Thousands of students and lecturers were banished, arrested, and in many cases, executed. Since the initiative, the regime shut down Iran’s universities for three consecutive years.

Ever since the regime has dispatched his thugs to universities as lecturers and students. The clerical regime also dedicated a large percentage of university entries to Iran-Iraq war veterans and their offspring, who were loyal to the ruling theocracy. They are supposed to make sure any voice of dissent across academia is choked on the spot. Throughout the years, the regime has increased the budget and deployment of security forces on campuses.

Yet, these measures could not completely shut down the university students’ movement, so Tehran resorted to a brutal crackdown in 1998 and 2009 when protests erupted in universities across Iran.

Now, this movement has risen from its ashes, and by resisting the regime’s crackdown and guiding protests, Iran’s universities have earned back their place as “bastions of freedom.”

On October 2, the regime’s security forces raided the Sharif University of Technology. The students confronted the fully-armed forces while people from various parts of Tehran rushed to their aid. Soon anti-regime protests formed outside the university, preventing the regime from resorting to a bloodbath at Sharif University.

The mass arrests of university students have added to the defiance of this movement. Regime top officials, such as its president Ebrahim Raisi and the government spokesperson Ali Bahador-Jahromi, who went to universities to deliver speeches in October, were confronted by brave students who called them out and wanted them to leave.

On October 8, students of the all-female Al-Zahra University of Tehran forced Raisi to leave while chanting, “We don’t want a murderer as a guest,” referring to his dark human rights record, particularly the 1988 massacre of 30,000 political prisoners.

The last two days of protests, after days of arrests and violence by the regime, once again put on the Iranian people’s desire for regime change on display. The extensiveness of protests and strikes from universities to all parts of society indicates an unwavering national determination to topple this regime. This determination and courage deserve adequate international support, such as recognizing the Iranian people’s right to self-defense and self-determination.