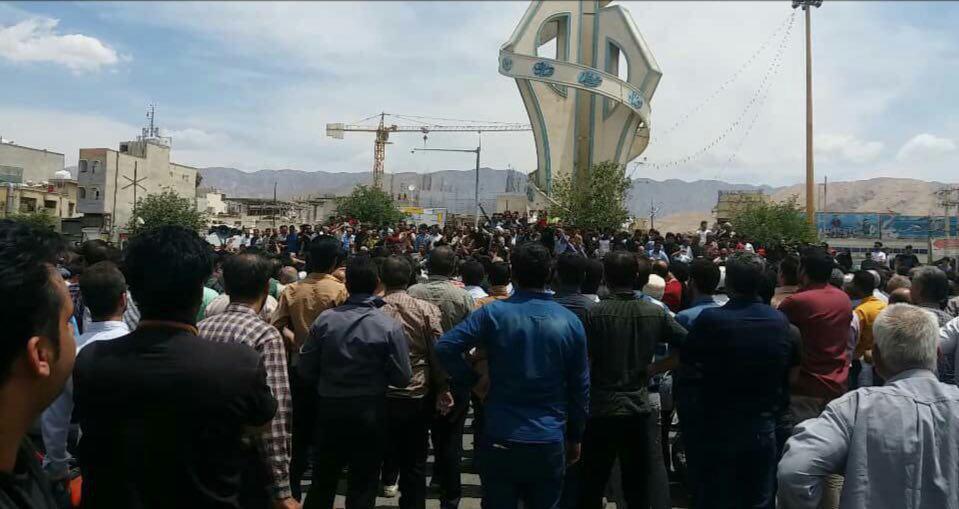 Protesters are demanding the martyrs’ bodies and the release of prisoners

On Saturday, May 19, the people of Kazerun, continued their uprising against the suppressive regime’s actions and killing and detaining their children by chanting “My detained brother must be freed!”, gathering and protesting in Shohada Square and in front of the judiciary of the mullahs regime. Kazerun shopkeepers also closed their shops and the pressure of intelligence agents to force them to open the shops did not succeed.

The regime’s agents, especially the intelligence agents, were deceptively trying to end the protests, but people are demanding the delivery of the bodies of the martyrs and the release of the arrested. A number of protesters were martyred during a demonstration of the people of Kazerun on Wednesday that became bloody by shooting of the repressive forces. Ali Mohammadian Azad and Omid Yousefian are two of the martyrs of Kazerun’s uprising. Omid Yusefian, who was shot on Wednesday by the Revolutionary Guards, died on Saturday due to the severity of the injuries sustained.

On Friday, the risen people of Kazerun turned the city into a scene of confronting the totality of the oppressive apparatus of the clerical regime. Revolutionary Guards, Basijis, plainclothes and anti-riot guards, who were sent from other cities to Kazerun, were deployed in the city’s central locations and closed streets leading to Friday’s prayer show. Nevertheless, the risen people broke up the hypocritical Friday prayer’s show by chanting slogans. The gathering in the Al-Nabi mosque, where the governor was supposed to speak, was disrupted with the slogan “The incompetent governor must be executed!” The attacks of repressive forces on protesters on the Shohada Street led to widespread street clashes and skirmishes. By burning tires, people blocked the path of repressive forces’ vehicles and defended themselves with stone and wood and breaking the mosaics of the streets.

In blind attacks, the mercenaries broke the glasses of parked car windows in parking lots. During the clashes on Thursday and Friday, a number of repressive forces’ vehicles and several centers of looting and government crackdown were set on fire.

The protests continued Friday night until Saturday morning. In Simashahr Square, people chanted slogans against the mercenary attacks: “Do not be afraid we are all together; and we are children of war, let’s fight”. At Quds intersection, the shooting of repressive forces on the protesters led to clashes where in addition to wounding the youth, a number of plainclothes and intelligence agents of the regime were also wounded. In the clashes on Thursday, the courageous young people also beat some of the murderers and forced them to flee. The injured mercenaries were transferred by a bus to Nourabad Mamassani.

Secretariat of the National Council of Resistance of Iran
May 19, 2018

Previous article
Maryam Rajavi: The Mullahs’ Religious Fascism in Iran Is Fleeting, and Devoid of Any Future
Next article
Despite regime’s vicious crackdown, Kazerun residents have carried on with their protests and demonstrations