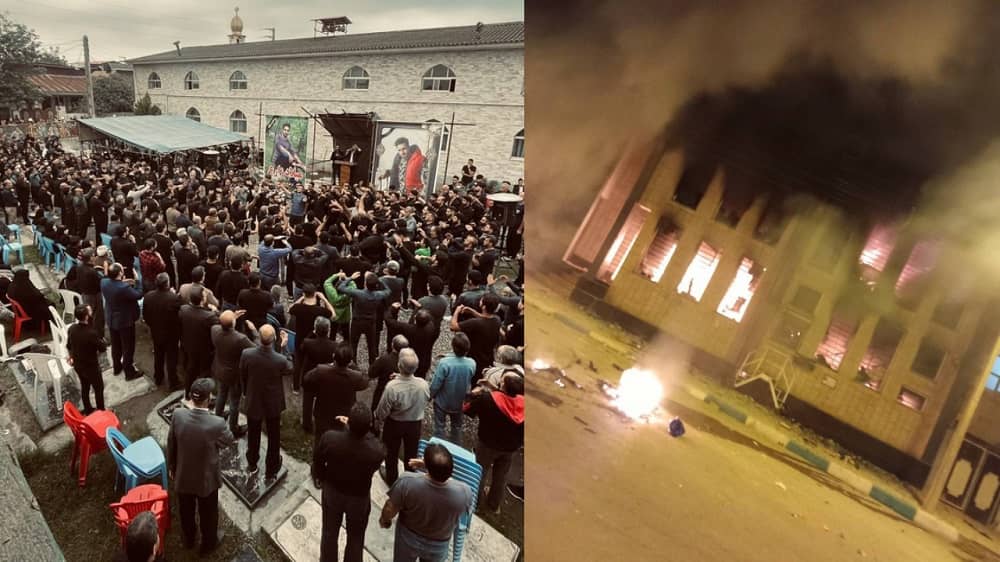 On Friday, October 28, marking the 43rd day of the uprising, locals in the city of Galikesh in Golestan province, northern Iran took to the streets after the Friday prayer sermon in support of the people in Zahedan, simultaneous with protests in Zahedan, Saravan, Iranshahr, and Mahabad. In Khash, Sistan and Baluchistan province, youths attacked the Goharkooh outpost using rocket-propelled grenades (RPG). In Mahabad, street clashes continued late at night, and people set up barricades in the street to confront oppressive forces.

In Tehran, brave youths torched a paramilitary Basij base in Piroozi street using Molotov cocktails. They burned a Basij patrol vehicle in the Shemiran-e-Now district and blocked the roads by setting trash cans on fire in the Tehran Sar district. In Tehranpars, chants of “Death to the dictator” were heard at 9:00 PM local time from residential homes across the neighborhood.

In Babol, people attended a ceremony to honor the 40th day of martyrdom of Milad Zare, slain during the uprising, held a protest chanting anti-regime slogans, and confronted Basij forces’ attack chanting, “Basij mercenaries! This is the end!”

In Qasreshirin, attending the burial of Afshin Asham, who was killed during the uprising, people and youths held a rally while chanting “Death to Khamenei.” They also burned down a branch of the Sepah Bank.  In Falavarjan, rebellious youths set the Friday Prayer Imam’s office on fire. Nightly protests were held in Miandoab and Marivan by lighting large street fires. People held nightly protests chanting slogans like “Death to the dictator” in Tabriz University’s dormitory, Shahpur street in Abadan, and Arak. The youths in Borujen overturned a police car.

In Tonkabon, security forces opened fire on people’s nightly protests, and in return, courageous youths clashed with them using hit-and-run tactics. Locals in Borujerd protested while chanting slogans such as: “Death to Khamenei” and “Death to the dictator.”

In Sanandaj, a young athlete named Ashkan Morovvati was wounded after being shot by IRGC forces. In Arak, the regime’s criminal forces attacked youths lighting candles in Shariati street in memory of the uprising martyr Mehrshad Shahidi and arrested some of them.