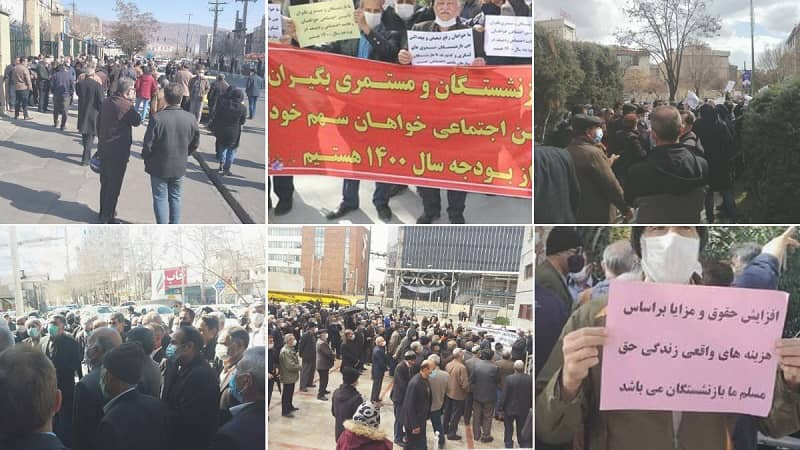 “Only by taking it to street, we get our rights”, “Our enemy is right here, they lie that it’s America”, “We live in poverty, while you (regime officials) are well off.”

This morning, retirees and social security pensioners protested for the sixth time in Tehran and 25 other cities in objection to their terrible living conditions, high prices, and the indifference of the regime’s officials. Retirees and pensioners have now joined the poor sectors of society as a result of the clerical regime’s plundering policies.

The rally in Tehran began in front of the Social Security Organization and continued with a march to the regime’s Planning and Budget Organization. The repressive State Security Force (SSF) showed up in force to prevent others from joining the rally. In addition to Tehran, retirees in Ahvaz, Yazd, Tabriz, Kermanshah, Zanjan, Arak, Ilam, Khorramabad, Karaj, Ardabil, Mashhad, Isfahan, Rasht, Sanandaj, Shiraz, Bojnurd, Qazvin, Neyshabur, Shahroud, Shooshtar, Shush, Kerman, Sari, Dezful and Abadan also held protest gatherings in front of local Social Security Organization or governate. In Shush, people marched from the office of a regime parliament member to the governor’s office. In Ardabil, repressive forces attacked the retirees’ gathering and seized their placards, stopping the protest.

Among the retirees slogans in today’s protests were: “Only by taking it to the streets, we could gain our rights,” “The nation has never seen so much injustice,” “Our enemy is right here, they lie that it’s America,” “Yesterday’s hard workers, today’s protesters,” “The retirees demand: Wages on par with the inflation rate,” “We are paid in rials (Persian currency equal to 0.000024 USD), while our expenses are in dollars,” “We won’t rest until we get our rights,” “Rouhani must be held accountable for inflation and high prices,” “The bankrupt state is the retirees’ enemy,” “Yesterday’s veterans, today’s Hungry.”

Mrs. Maryam Rajavi, the President-elect of the National Council of Resistance of Iran (NCRI) saluted the deprived and defiant retirees, and said that as long as this corrupt and plundering regime is in power, poverty, discrimination, inflation, high prices and unemployment will continue and intensify. The continuation of the retirees’ protests reflects the resolve of the people of Iran to gain their rights. The most important usurped right is the people’s rule usurped by the evil clerical regime.

Secretariat of the National Council of Resistance of Iran (NCRI)
February 28, 2021