The strike of 3,500 workers from the Iranian National Steel Industrial Group in Ahvaz, which began on January 23, entered its fifth day. They are protesting failure to pay their three months’ salary and benefits and false employer promises, and demand payment of wages and social security premiums and their supplementary insurance.

Workers suffer from the shortage of basic work facilities and needs. They have also warned against restoring the previous corrupt management of this industrial unit, which has caused the current deterioration of the factory and workers. Protest workers say that despite the fact that the production lines are active, the plunderers are ignoring workers by giving hollow promises. The regime’s agents are trying to force the workers to break the strike by threatening them to record their absences, depriving employees of the benefits, expulsion and identifying them to repressive organs.

With over 54 years of experience, the Iranian National Steel Industrial Group is a specialized manufacturer of large craft products with a capacity of over 3,000 people.

The huge factory, which during the anti-patriotic war with Iraq, was providing the needs of the war used by the Revolutionary Guards, including the production of mortars, was privatized in 2009, and following the revelation of a 3000 billion Tomans embezzlement of in 2011 for its massive debts, was handed over to the Bank Melli. The Melli Bank also plundered 400 million tomans proceeds of the sale of manufactured goods, and auctioned it at a low price in March 2016. 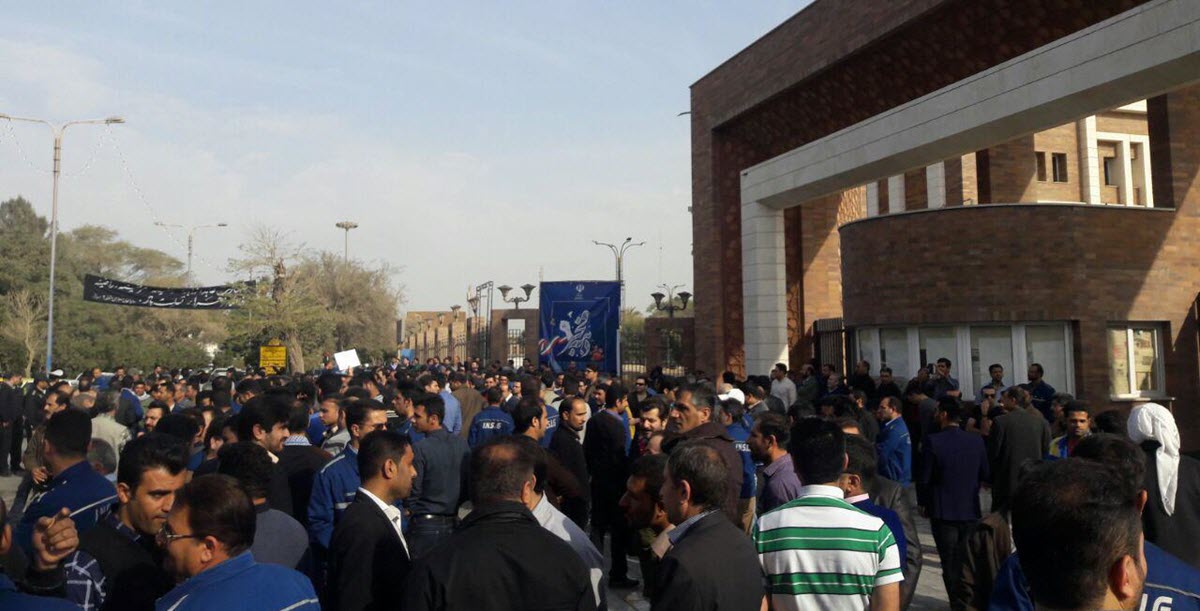 The owner of Ahvaz Steel, who also owns the Zagros Airlines, Esteghlal Sport Club in Khouzestan, and Dariush Hotel in Kish Island and has usurped billions of dollars of the assets of the Iranian people, refuses to pay the salaries and benefits of the deprived Ahvaz steel workers. Meanwhile he has just announced the purchase of 28 Airbus planes (IRNA news agency – June 22, 2017).

The production of the National Iranian Steel Group has dropped by 10% due to the looting of its capital by the Revolutionary Guards and other government agents and the regular layoffs of the workers (Qods force Tasnim News Agency-December 4, 2017). The workers of this huge economic hub of the country, despite working in difficult circumstances, have been deprived of their low wages, which do not even provide the basic needs of them and their families, and every few months, they go on strike to achieve their rights.

The Iranian Resistance salutes the honorable and hardworking workers of the National Iranian Steel Group in Ahvaz, and calls on the general public, especially workers throughout the country, for unity and solidarity with them and to stand against the plunderers of national assets and robbers of the toilers, and calls on all labor unions to condemn oppression and repression against Iranian workers.

Secretariat of the National Council of Resistance of Iran
January 27, 2017

Previous articleIran: More Children Died Due to Frostbite in the Earthquake-Stricken Area
Next articleIran: Prisoner Abandoned in Prison Despite Spinal Cord Injury