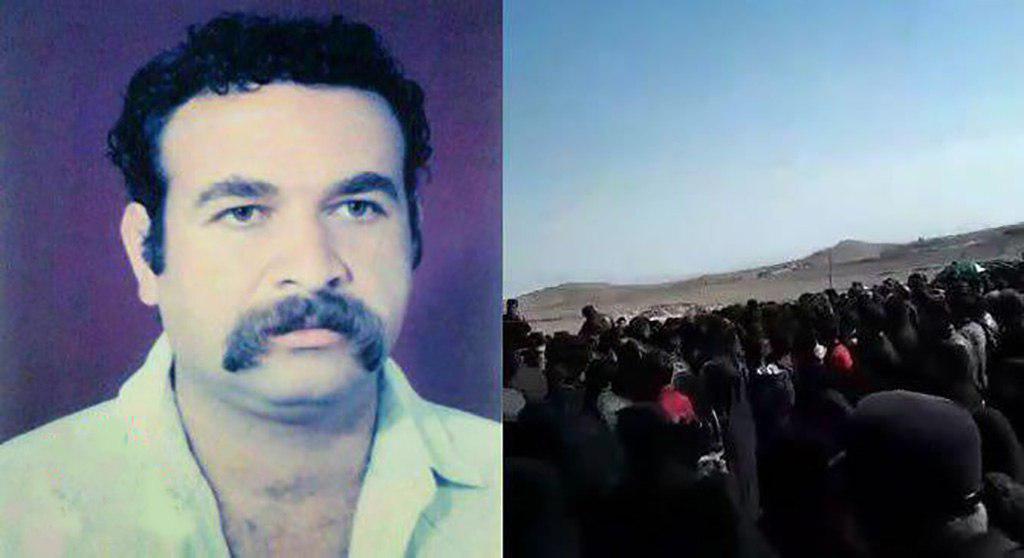 The body of the Pahlevan (champion) Seyyed Ebrahim Rasouli, brave son of the people of Eghlid (Fars province), was buried on Sunday, Janury 21, with the participation of thousands of people. Ebrahim Rassouli, who was known for chivalry, affluent ethics and helping the poor among the people of Eghlid, was killed on January 18, in an assault by police force mercenaries. He defended himself with a hunting firearm against the guards who attacked his house. Due to this clash that lasted for 10 hours, this brave hero eventually was killed.

Khosrow Razmjouee, the criminal commander of the Police Force of Eghlid, called Ebrahim a “thug” to cover up this vile crime and while clinging to a list of drugs that falsely claimed to have found in Ebrahim’s home, he claimed that he had committed suicide (Young Reporters Club, affiliated to the Revolutionary Guards).Janury 18, 2018)

Thousands of people from Eghlid, with a mass participation in the funeral of Martyr Ebrahim Rassouli, chanted slogans such as “Today is the Day of Mourning, Our oppressed champion is before God today”, “O our Lord, our champion, we miss you today”, expressing their anger and disgust from the regime’ ludicrous allegations.

The blood and suffering of the brave people of Iran will burn the flames of the uprising against the criminals ruling Iran.

Previous article
Wave of Arbitrary Arrests Throughout Iran and Call for Immediate Release of Arrestees
Next article
Iran: Some 50% of School Buildings in Tehran Are Worn-Out