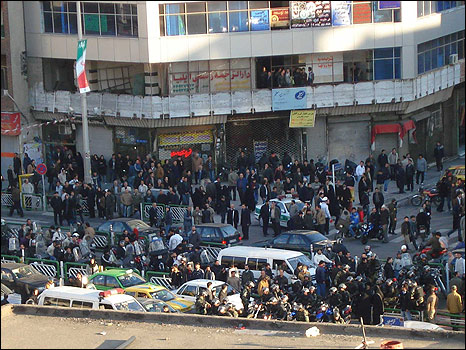 Thousands of people in Tehran staged vast anti-government demonstrations this afternoon in various locations of the city, chanting “Death to Dictator”, “Down with Khamenei” and “Down with velayat-e faqih principle”.

Thousands of people throughout Tehran’s Imam Hossein Road up to Enqelab (Revolution) Square are demonstrating, chanting “Mobarak, Bin Ali, and now Seyyed Ali (Khamenei)”. Suppressive measures taken by State Security Forces have not been able to prevent this demonstration. Fierce clashes between protesters and suppressive forces are continuing around Revolution Square.

A large number of people in Mulla Sadra Road, Jamalzadeh Ave. and Sattarkhan’s Old Shopping Center staged a demonstration and clashes are taking place between the people and suppressive forces in the Sadeqia district. A number of youths have been arrested during these clashes.

In another location, Sharif University students demonstrated chanting “Death to Dictator” and other slogans.
Also, suppressive forces surrounded a large of people inside the Student’s Park, not allowing them to leave the area.