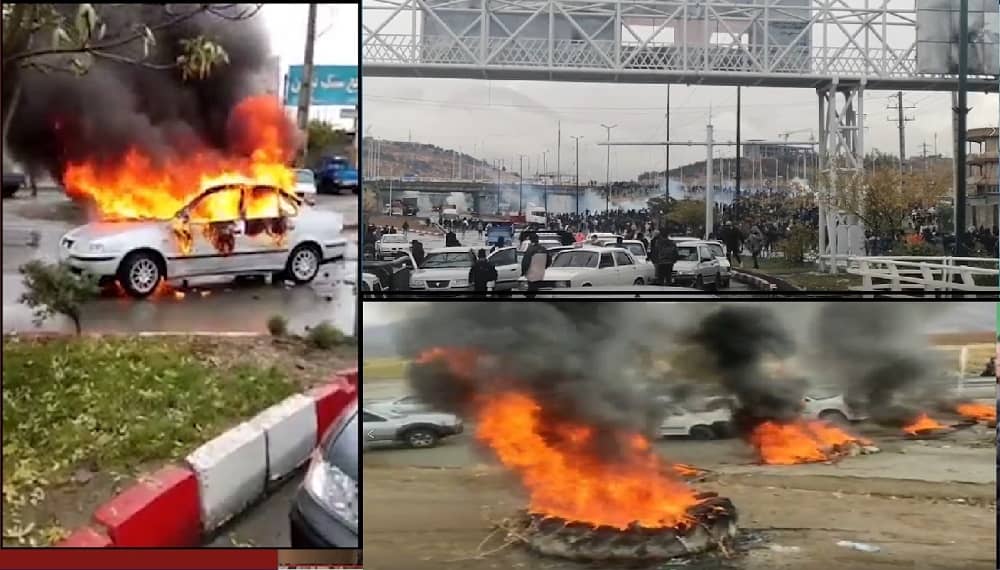 Different parts of Karaj witnessed protests and clashes between youths and regime agents. In Fardis in Karaj, a huge number of people staged their night protest. In Behshahr, youths punished a member of the paramilitary Basij force. A night protest was held in Ivanki, and young people set fire to several banks affiliated with the IRGC. In Semirum, people set fire to a police car. In Mahabad, youths took control of many streets. In Sarpol-Zahab and Marivan (western Iran), youths blocked streets with fire. In Saqez, people set fire to a government store and a water station, where suppressive agents were stationed, and closed the Saqez road to Baneh. In Bagh Malik, Khuzestan,  criminal agents shot protesters at night wounding several of them. In Yazd, people forced the regime’s agents to flee.

Protesters in Arak were involved in hit-and-run clashes with the regime’s agents who began shooting at people in Mokhaberat. In Javanrud, people blocked streets by lighting fire. In Bukan, defiant youths set fire to the building of the state’s so-called penal code office. In Najafabad, criminal agents of the special unit attacked protesters. In Sanandaj, where a ceremony on the 40th day for four martyrs was being held, people clashed with the security forces. In Saveh, youths set fire to a Basij base.

In Ilam, suppressive agents shot at protesters which led to a hit-and-run clash. In Isfahan, The regime’s agents shot at the people who protested in Chahar Bagh Bala, Malik Shahr, and Motahari, clashed with the regime’s repressive agents and broke down road signs, and blocked streets. In Foulad Shahr, security agents did not dare to enter the areas where the protesters had gathered. In Mobarakeh, youths started fighting with the regime’s agents. In the village of Malat, Langrud (North), security closed the roads leading to the grave of Pejman Qalipur, one of the martyrs of the November 2019 uprising, preventing the ceremony to be held in his memory.

In Urmia, people protested on Ostadan and Imam Street; repressive agents fired tear gas at protesters on College Street. Mashhad’s night protests started from Pirouzi Blvd. and in the Saremi district, where people clashed with security forces. In Ahmadabad, people punished several paramilitary Basij agents and blocked the street using traffic fences at the Sayyad intersection. In Rasht, security forces shot at people. In Babol (North), people protested at night. In Kamiyaran, people protested and chanted, “Death to the oppressor, be it the Shah or the Leader (Khamenei)”, and “As long as one Kurd is alive, Kurdistan will be alive too.” In Hamadan, youths in Hessar district threw Molotov cocktails at the regime’s agents. In Aligoodarz, youths set fire to the office of a member of the regime’s parliament in Saheli street.

November 17 – Tehran, #Iran
Locals in Taavon Blvd were seen continuing the nationwide protests against the regime on the 63rd night of the uprising.#IranRevolution2022#مرگ_بر_ستمگر_چه_شاه_باشه_چه_رهبر pic.twitter.com/Uu3cTBsLbS

November 17 – Mashhad, northeast #Iran
Locals in Sayyad Shirazi St. continuing the nationwide protests against the regime on the 63rd night of the uprising.#IranRevolution2022#مرگ_بر_ستمگر_چه_شاه_باشه_چه_رهبر pic.twitter.com/BzQ9Ikodzf