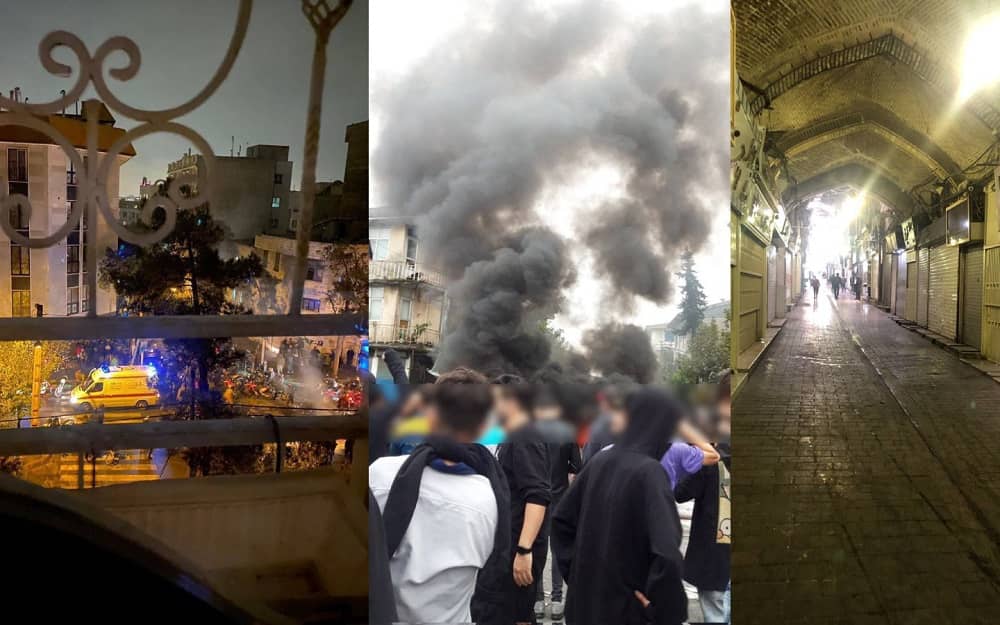 Protests across the country, honoring the martyrs

On Friday morning, November 18, the 64th day of the uprising, the funeral processions of the martyrs in the cities of Izeh, Mahabad, Tabriz, Semirom, Kamyaran, Bukan, Sanandaj, Qazvin, etc., were attended by thousands of local people, which turned into protests with slogans against Khamenei and calls for the overthrow the regime. People in different cities of Sistan and Baluchistan province staged protests after Friday prayers sermon chanting, “Death to Khamenei.”

In Izeh, the burial ceremony of Kian Pirfalak, a 10-year-old boy, who has become a symbol of an oppressed nation and the brutality of the mullahs’ regime, was attended by a large. The participants were chanting, “Basij, IRGC, you are alike ISIS”, and “Khamenei, the tyrant, we will bury you.” The people of Lorestan wrote on social networks, “Despicable Khamenei! we, the people of Lorestan, shall avenge the martyr Kian Pirfalak.” At his funeral, Kian’s mother described how security agents and plainclothes opened fire on their car.

Simultaneously, the people of Izeh held the funeral of 14-year-old Artin Rahmani, who was killed by security guards on November 16 in Izeh, with many people attending and singing the song “It’s the time to fight back” and chanting, “Death to Khamenei” and “Death to the entirety of the regime.”

In Tabriz, the funeral procession of Aylar Haghi was held in Vadi Rahmat cemetery with people chanting, “We will not give in shame” and “This year is the year of sacrifice, Seyed Ali (Khamenei) will be overthrown.” Aylar was a 23-year-old medical student at Tabriz Azad University who was murdered during the evening protest on November 16. Suppressive forces and police motorcycle units brutally attacked Aylar’s funeral procession, but the people fought back by chanting, “We are all Aylars, fight and we shall fight back,” “Mullahs must get lost,” “I will kill whoever killed my sister,” and “This year is the year of sacrifice, Seyyed Ali (Khamenei) will be overthrown.”

In Semirom, the funeral ceremonies of Morad Bahramian, Moslem Hoshangi, and Ali Abbasi, who were killed by the IRGC forces during the protest on November 16, were attended by large crowds chanting, “We are ready to sacrifice, we have had enough of oppression,” and “We are not scared, tell my mother that she no longer has a son,” and “Seyyed Ali (Khamenei) is doomed to be overthrown”.

In Mahabad, the funeral ceremony of “Azad Hosseinpour”, who was killed yesterday, was attended by thousands of Mahabad residents in Bagh Ferdows cemetery chanting, “Death to Khamenei,” “Kurds, Baluch and Azari, Freedom, Equality,” “Kurdistan is the graveyard of the Fascists.” After the ceremony, the people set up roadblocks by lighting fire. The regime’s agents attacked the people and fired tear gas, but they resisted and engaged in hit-and-run clashes with the agents.

In Mahabad, the funeral ceremony of another martyr of the uprising, Mohammad Ahmadi Gagash, was attended by a large crowd who staged protests in the streets after the ceremony. The suppressive forces opened fire on protesters and fired tear gas. The defiant young girls inflicted damage to the Basij Ansar Resistance Base and set fire to it.

Kamyaran residents held a memorial ceremony to honor Fuad Mohammadi at his burial site in Mavian village, and in Bukan, the funeral ceremony was held for Ghafur Moloudi, who was shot dead by the regime’s agents on November 17.

In Nanleh village of Sanandaj, after Friday prayers, people gathered at the graveyard of Aram Habibi, who was buried yesterday, and chanted, “Death to the dictator”. In Sepidar city, people converged at the grave of Navid Afkari, a wrestling champion and a martyr of the November 2019 uprising, and honored his memory while chanting, “Death to Khamenei.” In Qazvin, the ceremony of the third day of Sepehr Esmaili’s murder was attended by a large crowd chanting, “Death to the Supreme Leader after many long years of crimes.”

Today, in various cities of Sistan and Baluchistan province, including Zahedan, Saravan, Chabahar, Khash, Iranshahr, Taftan, Ashar, etc., people staged demonstrations at the end of  Friday prayers chanting “Death to Khamenei,” “Khamenei is a murderer, his rule is illegitimate,” “Death to Basiji,” “Mullahs must get lost” and “I will kill whoever killed my brother.” In some parts of Baluchistan, including Sarkur and Jekigur, people put barricades on the transit highway by lighting fire. Suppressive agents opened fire on people in Iranshahr. Youths in Khash destroyed a picture of Qassem Soleimani, former Quds force commander.

Last night, the defiant youths in Qom set fire to the theological school and in Bandar Abbas, they torched the office of a member of the regime’s parliament by throwing Molotov cocktails. People of Torghabeh (Khorasan) set fire to a large banner with Ali Khamenei’s picture.

Previous article
Widespread Protest and Clashes with Repressive Forces in Tehran and Cities Across Iran on the 63rd Day of Uprising
Next article
Iran’s Democratic Revolution Passes a Major Turning Point, Calls for Int’l Support