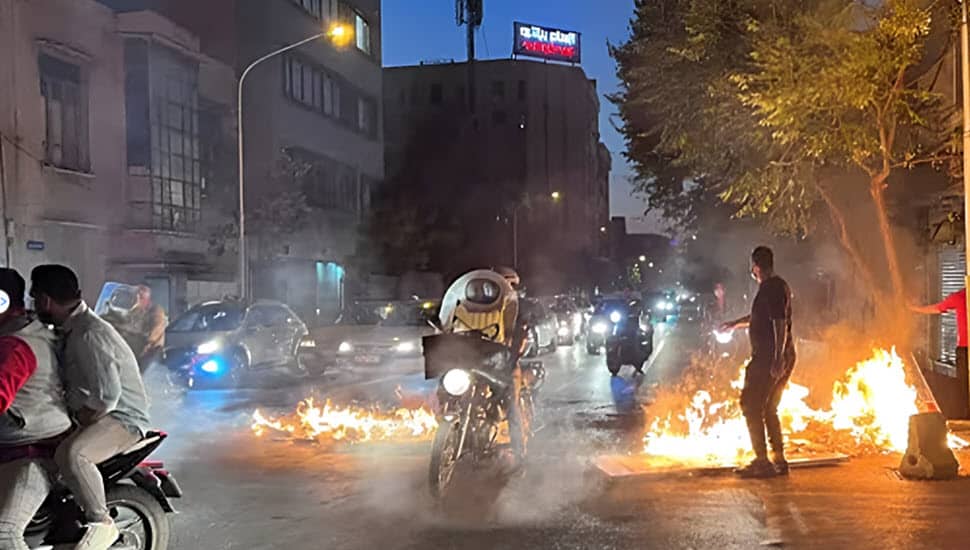 Iran’s nationwide protests continue, displaying an unwavering will of Iranians to topple the ruling theocracy. Into its third month, what many believe is Iran’s democratic revolution, constantly evolves and hits new milestones. The intense escalation of public anger displayed in the last three days, despite a heavy state crackdown, proved that the situation in Iran will “never be the same.”

There were many calls for protest from Tuesday to Thursday to honor the martyrs of Iran’s major protests in November 2019. Demonstrations expanded across Iran, and Iranians from all walks of life voiced their desire for regime change. They rejected the ruling theocracy and even a return to the past and a monarchial dictatorship by chanting: “Death to the oppressor, be it the Shah or the leader (Khamenei).”

November 15 – Mahabad, northwest #Iran
Protesters chanting:
"Death to the oppressor, be it the Shah or [Khamenei]!"
"Death to Khamenei!"
"Death to the dictator!"#IranRevolution2022#مرگ_بر_ستمگر_چه_شاه_باشه_چه_رهبر pic.twitter.com/57rQeUZfak

The fact that protests show no sign of ease, despite the regime’s attempts to quash them, is now common knowledge. But the bravery of Iranians fighting back against security forces in the last three days stunned all spectators, even the regime’s insiders.

All guilds in Tehran and dozens of other cities’ Bazar went on strike in the last three days in solidarity with the nationwide uprising.

In the Kurdistan region, people clashed with security forces. They used rocks and knives to confront the fully armed security forces. In Bukan and Mahabad, defiant youth torched police stations and vehicles, disarmed the security forces, and punished several of them.

On November 17, the state-run Fars News Agency, linked to the Revolutionary Guards (IRGC), quoted the political and security deputy of the regime’s governor in Kurdistan, announcing that “during today’s unrest in Sanandaj, Major Hasan Yousefi from the state security forces of the Kurdistan province was killed by the people.”

In Bukan, angry locals captured the governorate and burnt it to the ground. They also freed the city centers and celebrated their victory in pushing back the oppressive forces.

People now widely use Molotov cocktails to fight back against the regime’s forces, who open fire on crowds at point-blank range. As protests persisted in the last few days, authorities made unprecedented acknowledgments of how people resist oppression.

“I told other forces that when we attacked the crowd, they were easily dispersed. Now it is different. They stand their ground and resist for hours. When we enter alleys, people throw everything they have on our heads, from iron to pots, rocks, and benches. This generation doesn’t run away. They resist against you,” said Seyed Pouyan Hosseinpour, an IRGC officer and the deputy of Seraj Organization, an apparatus controlling Iran’s cyberspace, on November 17.

“These rioters only use the language of force to dialogue with us. No, they are not here to make reforms. They are here to disrupt our security,” MP Hossein Mirzaie told the state-run Ruydad-e 24 on Monday.

Iranians have continued their revolution in defiance of the mullahs’ pledges of harsh punishment for such dissent. While the regime has deployed violent strategies to quash protests, defiant youth have been using hit-and-run tactics to confront the oppressive forces.

Local reports suggest that in Doroud and Isfahan, entire special forces units were lured into a particular district and ambushed by a big group of rebellious youth who threw handmade grenades at them. The insurgency tactic clearly displayed a new level of organized resistance and will certainly take its toll on the security forces’ morale.

As many Iranians express themselves on social media, freedom is no longer a distant dream but a reachable and close reality. They have been paying the price for their freedom, and their courage deserves international support.

The developments of the last three days indicate that Iran’s nationwide uprising has passed a turning point, and people are ready to topple the regime at any cost. It’s now upon the world to accept the new reality and recognize their right to self-defense as it has always been a fundamental right of mankind throughout social evolution and our common history in the making.