Iran: Accounts Affiliated With PMOI/MEK and NCRI Have Not Been Removed

Contrary to the unreliable and dubious claims of religious fascism in Iran, its agents and lobbies under various covers, none of the accounts belonging to the Mujahedin-e Khalq (MEK / PMOI) and the National Council of Resistance of Iran (NCRI) has been closed. Because none of the Facebook rules have been violated, the claim that there is a MEK-affiliated troll farm in Albania is ridiculous and absolutely false. This claim was first made by Javad Zarif and Hamid Baeidinejad, the mullahs’ ambassador to the United Kingdom, in 2018. 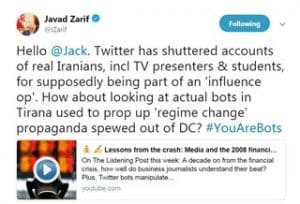 The state-run ISNA news agency quoted the regime’s ambassador to London, Saeed Baeidinejad on September 16, 2018, as saying, The MEK, “produces millions of messages in the form of subversive hashtags every day, using the most advanced information technologies.” He called on Twitter to “follow the official request of Dr. Zarif to close fake accounts that send subversive hashtags against Iran.”

On the same day, in a tweet, Javad Zarif called for the closure of the resistance supporters’ Twitter accounts. Thus, the shameless representative of the regime that has deprived 80 million Iranians of social networks has been issuing directives to close the regime opponents’ accounts for three years.

Meanwhile, Twitter, Facebook, and Instagram have closed at least 25,000 regime accounts so far, including accounts that recently interfered in the US presidential election in violation of all laws and regulations. It is also worth noting that Khamenei’s Twitter accounts in different languages have been suspended.

In June 2019, the clerical regime and its apologists engaged in hyperbole about what they called a fake account affiliated with the MEK under Heshmat Alavi’s name. They launched a propaganda campaign using a hit-piece by “The Intercept” and several Persian radio programs to disseminate their fake story about this and MEK’s accounts. But a few days later, after a thorough investigation and ensuring that Alavi’s account was credible and run by a real person, Twitter reinstated Alavi’s account and further exposed the demonization campaign. At the time, the regime’s ambassador to London parroting MEK’s “critics” tweeted: 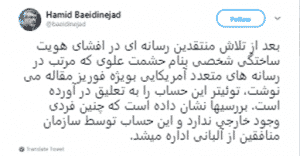 Now, in the face of Treadstone71 investigative report and the major scandal around the Iranian regime’s cyber campaign against the Free Iran Global Summit on July 17, 2020, the lobby backing the mullahs has cited Facebook’s “March 2021 Coordinated Inauthentic Behavior Report” about 11 countries, which relies heavily on previous negative media coverage of the MEK, the sources of which are Iranian regime’s intelligence agents, and has ludicrously pointed the MEK’s “offenses” in Albania, claiming that they have engaged in undesirable activities to influence the political situation in Iran! 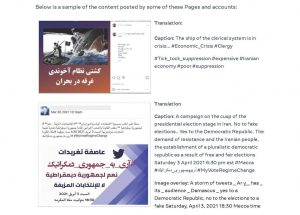 For this reason, Facebook has claimed to have removed 128 accounts, 41 pages, 21 groups, and 146 Instagram accounts that targeted global audiences including Iran”. The ridiculous reasoning was that “We found this network as part of our internal investigation and linked it to the MEK, an exiled militant opposition group from Iran now based in Albania.” The same report underscores, “We didn’t see evidence of the use of automation to run these assets. Our own automated systems disabled some of the accounts for…. violence and incitement.”

The religious dictatorship ruling Iran and its backers, lobbies, and operatives are in this way attempting to avenge the blow they received after the verdict by a court in Antwerp, Belgium, and overshadow the conviction of its bomb-carrying diplomat-terrorist.

Of course, Facebook or any other authority could have easily checked or can now check accounts it presumes to belong to the PMOI/MEK and the NCRI. Citing some dubious articles and sources affiliated with the mullahs’ regime to lash out at the Iranian Resistance lacks credibility and constitutes an all too well-known campaign of demonization.

The MEK has never used fake identities nor taken advantage of other people’s identities. Nevertheless, anyone, especially Iranians who oppose the regime, has the right to use pen names or signs and symbols they prefer out of security concerns. This is particularly the case regarding the PMOI and its supporters, who have always been the target of the regime’s terrorism, bombing, assassinations, massacre, and abduction.

That our fellow compatriots view the clerical regime engulfed in crisis and similar to the PMOI and the Iranian Resistance, and demand the overthrow of the religious fascism and the establishment of a democratically-elected republic, and reject the mullahs’ sham election are cause for honor and pride for any freedom-loving Iranian. Facebook must immediately reinstate the accounts by Iranian opponents of the regime, which have not violated its regulations.

Secretariat of the National Council of Resistance of Iran
April 7, 2021