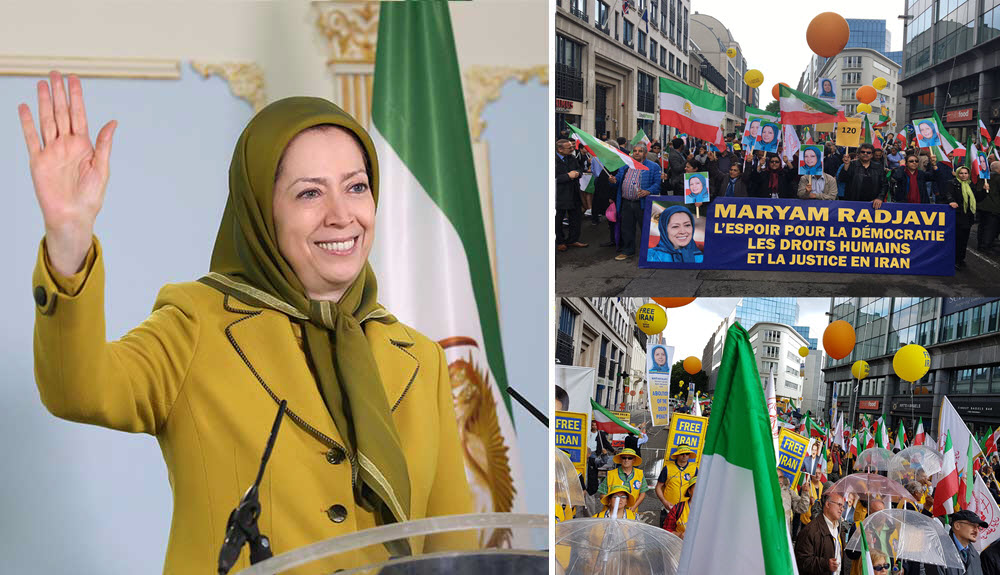 Thousands of Iranians gathered for a large protest demonstration in Brussels on Saturday, 15 June 2019. The protestors condemned the brutal violation of human rights by the ruling regime and its instigation of terrorism and warmongering in the region. They expressed support for the Iranian Resistance movement led by Mrs. Maryam Rajavi, the President-elect of the Resistance.

The protestors will voice support for the People’s Mojahedin Organization of Iran (PMOI/MEK) and resistance units inside the country while marching on Schuman Roundabout.

Mrs. Maryam Rajavi addressed the demonstrators in a video message, saying, “The faltering Iranian regime is besieged by a nation that has risen up and has lost all patience. As in the final days of the Shah’s regime, members of the regime’s parliament are ‘sounding the alarm’ in speech after speech and warning of an ominous fate, that awaits the entirety of the regime… Rouhani and his cabinet ministers are insisting that in the past 40 years the regime has never faced such critical circumstances.”

Mrs. Rajavi added that the Iranian people “want the downfall of the entirety of the regime, crying out for regime change. If anyone can change the behavior of the religious fascists and clerical dictators of Iran without trampling on Iranians human rights and their right to determine their destiny, then by all means, we welcome it and say go ahead and change this regime’s behavior as much as you can.”

She added in her message that “Apologists for this regime and those that benefit from its continued rule feign concern for war and push for providing benefits to this regime and appeasing the ruling murderers in Iran.”

Mrs. Rajavi underlined that, “The regime’s strategy for survival in the deadly crisis of its last days, is to demonize the MEK and Iranian Resistance as the main threat, and lay the ground for further terrorist acts against them. This rational leads to the refrain that the devil we know is better and the Iranian nation is better off with this regime and everyone should submit to its rule.”

Mrs. Rajavi concluded in her message that, “The terrorist plots uncovered in European countries during the past year, such as the attempted bombings in Albania and France, the arrest of Iranian regime agents and its diplomat-terrorist Assadollah Assadi, and the expulsion of four diplomat-terrorists from Europe, provided ample proof of the accuracy of repeated warnings by the Iranian Resistance that the regime’s embassies in Europe are centers of criminal plots. Therefore, we call on the European Union to place comprehensive sanctions on the religious dictatorship ruling Iran, and to proscribe the IRGC and the MOIS as terrorist entities. Its agents must be prosecuted, punished, and expelled. The heads of the regime must account for their crimes against the Iranian people, especially the massacre of political prisoners, in an international court of law.”