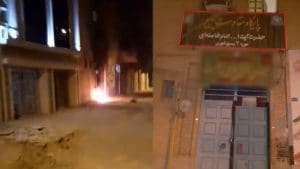 In the early hours of Wednesday, November 11, 2020, on the eve of the anniversary of the November 2019 uprising, defiant youth targeted three bases of the IRGC’s Bassji in Ahvaz, Isfahan, and Sabzevar. They also torched Khomeini’s poster in the main square of Khuzistan’s Qaleh Tal city in Khuzestan.

In Ahvaz, the suppressive Bassij base in Lashgar-abad Square was targeted and its sign and entrance were torched.

Defiant youth also targeted the IRGC’s suppressive Bassij base in Homayounshahr in Isfahan and the regime’s so-called seminary in Sabzevar and torched their signs and entrances.

Earlier, on Monday, Sunday, and Saturday, November 9, 8, and 7, respectively, defiant youth targeted four centers of suppression and plunder in Tehran and Karaj and set fire to their entrances.

On Monday, the so-called Khomeini’s Emdad Committee in Tehran was targeted and its sign and entrance were torched.

On Sunday, in two separate actions in Karaj, the offices of the regime’s Supreme Leader Khamenei’s representative in Alborz Province, and Karaj Friday prayer leader were targeted by defiant youth, and their signs and entrances were torched.

On Saturday, defiant youth also targeted the so-called seminary in Nasim-Shahr in Tehran and torched its sign and entrance.

International call for urgent action to save the lives of death row prisoners, especially political prisoners On Sunday morning, in a heinous crime, despite widespread...
Read more
Statements

Despite the deployment of IRGC and other repressive forces, the uprising and protests in Sistan and Baluchistan Province continue. On Saturday night, rebellious youths...
Read more
Statements

Head of the Medical Organization: The British COVID-19 is spreading in different provinces of the country. Any delay in obtaining the vaccines will...
Read more