Meanwhile, uprisings and protests are escalating in Iranian cities. The Resistance Units’ activities, including their disruption of the State Radio and Television networks, the Ministry of Culture and Islamic Guidance(i.e., the Ministry of censorship and imposing repression), and a number of its affiliated websites, the Ministry of Agriculture Jihad servers and portals, as well as the release of top-secret documents of the regime’s Prisons Organization, including the names and details of more than 33,000 agents of that organization, have terrified the entirety of the regime.

2. After the publication of the article by Professors Hossein Saeidian and Kazem

Kazerounian, exposing a fake poll published in favor of the regime, in a bid to retaliate, the MOIS tried a series of cyberattacks targeting Mr. Saeidian by sending a series of fake messages, impersonating the Secretariat of the National Council of Resistance of Iran (NCRI) to obtain information and also compromise his communication device.

3. Through its agents and posing themselves as staff of the Iranian Resistance-affiliated Satellite TV channel, Simay-e Azadi (Iran NTV), the MOIS communicated with Mrs. Fereshteh Karimi, the wife of the late Rahman Karimi, a well-known opposition poet and writer and supporter of the MEK and the Iranian Resistance, several times through a French telephone number and asked for several documents, writings, and photographs of Mr. Karimi to publish. Mrs. Karimi trusted the caller and sent the documents. However, later, in contact with Simay-e Azadi, she found out that she had been caught up in a trap set up by the MOIS.

4. The MOIS called Mrs. Nahid Hemmatabadi, a member of NCRI, and suggested having an interview with her. Mrs. Hemmatabadi, who had become suspicious, rejected the offer and raised the issue with the NCRI Secretariat. This turned out to be another trap by the MOIS by creating several fake email accounts, impersonating themselves as “Ms. Hamideh Taati,” “Iran-Efshagar website,” and the late Resistance Poet, Hamid Assadian, the MOIS sent phishing messages to the members of the Iranian Resistance and MEK supporters. These messages imitated a recent series of revelations by the Iranian Resistance entitled, “Iranian Resistance Unmasks Regime’s Judiciary Henchmen.” The regime could not hide its anger and frustration over the unveiling of its top-secret documents about its Prisons Organization.

In the fake email impersonating Iran-Efshagar (a Resistance website that focuses on exposing MOIS agents and activities), as seen in the picture, the dot after the word Iran has been removed, and the letter (e) has been added.

5. The MOIS has launched a website in English with the URL address https://teamsafavi.com and impersonating the name and photos of Mr. Ali Safavi and has also published an absurd slogan with the regime’s logo on it! Moreover, the website thanks to the United States, Israel, and the Prime Minister of India for their help to the MEK.

6. The MOIS sent messages and emails through a fake Gmail account, impersonating the national solidarity website in its Farsi name, [email protected] One of the emails warns an Iranian Resistance supporter’s website, “Aftabkaran,” against collaborating with Mr. Hossein Tutunchian, another supporter of the Resistance! As can be seen in the picture, instead of an “L” (l), there are two “L”s (ll), and the MOIS has used a Gmail account, while the actual email of the national solidarity website is: [email protected]. 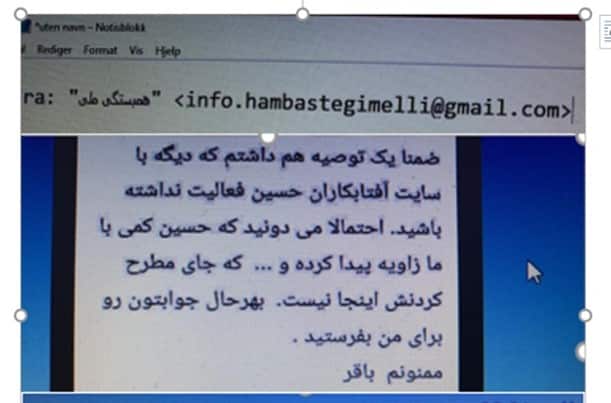 7. On May 28, MEK supporters’ rally in Brussels was attacked by the operatives of the regime. The appearance of the mercenaries, especially the woman who was with them, did not look like the appearance of the regime’s supporters. Before that, two terrorist plots against two Mojahedin officials were discovered and thwarted in Albania. The relevant authorities are aware of the plots, and the related documents can be made public if needed.

The NCRI’s Security and Counterterrorism Committee calls on all supporters of the Iranian Resistance to be vigilant against the tricks and conspiracies of the MOIS and the terrorist Quds force. It also urges them to inform other compatriots about them.

The Counterterrorism Committee also urges the supporters and Iranian compatriots to refrain from replying to emails, telephone calls, text messages, and any anonymous communications, including Telegram, Skype, WhatsApp, etc., and report suspicious matters to the Committee’s representatives or Mojahedin offices in various countries.

The National Council of Resistance of Iran (NCRI)