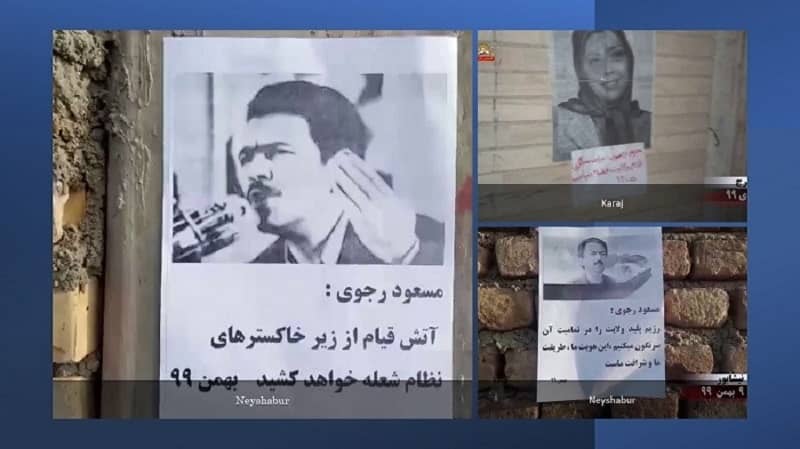 In the last week of January 2021, supporters of the Mujahedin-e Khalq (MEK/PMOI) and Resistance Units in various cities across Iran wrote graffiti and posted banners and placards of the resistance’s leadership, Mrs. Maryam Rajavi, the President-elect of the National Council of Resistance of Iran (NCRI), and Massoud Rajavi, the leader of the Iranian Resistance. These activities took place in Tehran, Mashhad, Rasht, Neyshabur, Karaj, Isfahan, Ilam, Kermanshah, and Ahvaz and were enthusiastically welcomed by the people in these areas.

Some of the slogans were: “Maryam Rajavi: No power in the world is stronger than our will for freedom,” “Massoud Rajavi: The flame of uprising will remain ablaze,” “Down with Khamenei, hail to Rajavi,” “The rebellious Iran will rise up,” “Khamenei is a murderer, his leadership is illegitimate,” “The mullahs must get lost,” “The roots of every crime is the IRGC and the regime’s Supreme Leader,” “Maryam Rajavi: The fear of downfall is felt by the religious dictatorship to its core,” ” Massoud Rajavi: The army of the hungry, are ready for revolt and uprising,” “Let the people of the world know that Massoud (Rajavi) is our leader.”

Secretariat of the National Council of Resistance of Iran (NCRI)
January 30, 2021

Call for immediate action by UN, EU and human rights advocates to secure his release Saeid Sangar, 47, from Piranshahr, one of Iran's longest-incarcerated political...
Read more