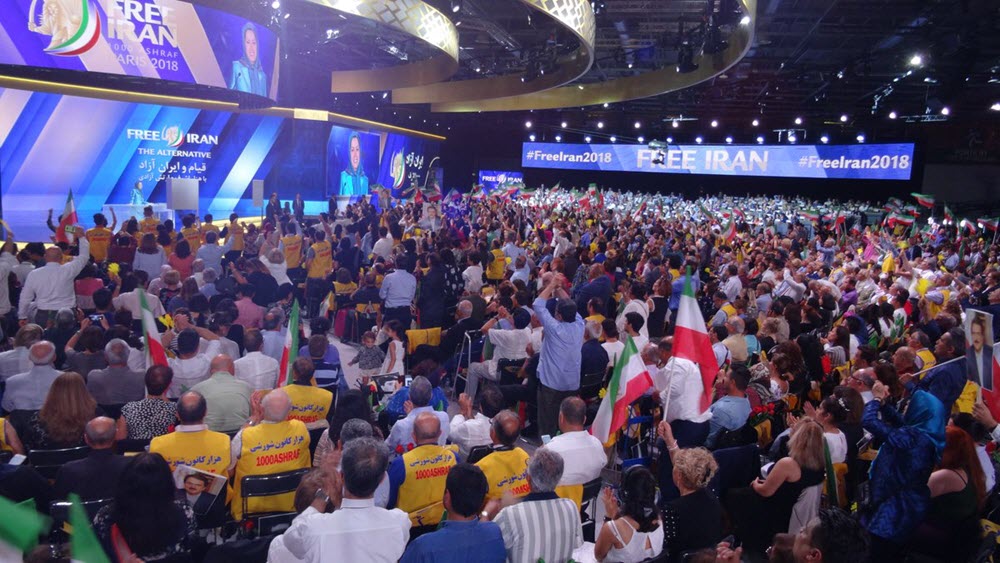 Maryam Rajavi: Uprising and protests have engulfed Iran, both factions have reached the end of the line; victory is inevitable, and Iran will be free

The magnificent annual grand gathering of Iranians and supporters of the Iranian Resistance was held in Paris on Saturday, June 30, 2018. “Free Iran” featured the President-elect of the National Council of Resistance of Iran, Maryam Rajavi, and hundreds of top politicians and statesmen from five continents.

In her address to the gathering, Mrs. Rajavi pointed out, “A passionate generation thirsty for freedom has risen to take over the entire country and take back Iran from the occupiers, the mullahs. The workers at Haft-Tapeh, the steel workers, the farmers of Varzaneh, the youth in Kazerun, the truck drivers and owners all across the country, the Bazaaris, the youth in Lalehzar, Ferdowsi, Shoush, Mellat and Ekbatan in Tehran, exhibited enormous courage in confronting the ruthless security forces. This is the Iranian nation’s fight. The regime’s overthrow is inevitable. Victory is certain and Iran will be free. The prospects of an Iran devoid of the mullahs and the Shah are looming. The so-called solution within the religious fascism has become null and void. The rebellious population and youth have ended the era of posturing for both factions of the regime.” 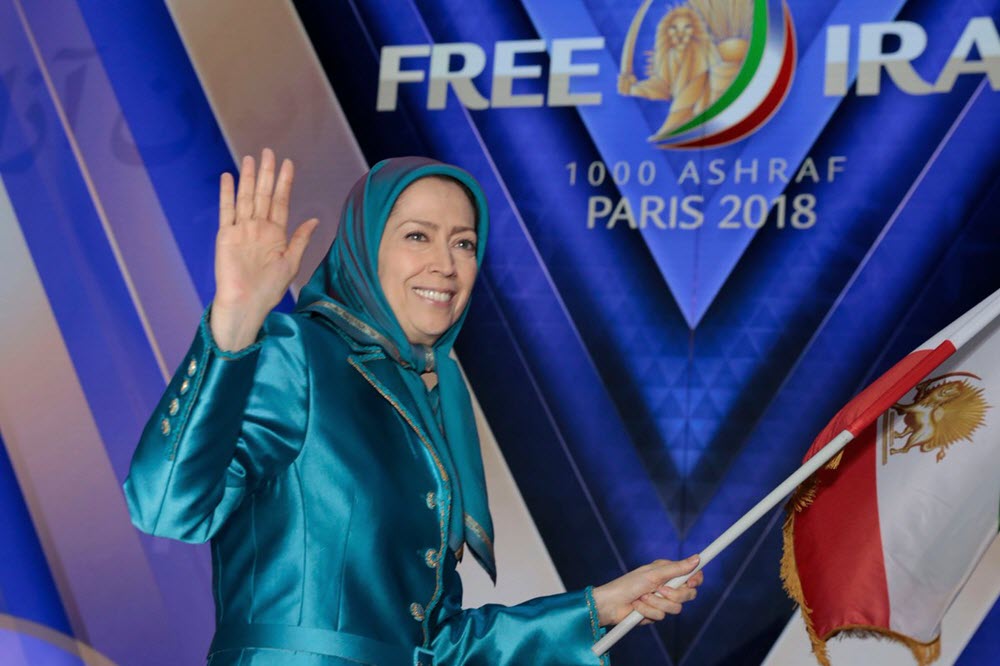 Maryam Rajavi added, “For the past six months, the Iranian people, all nationalities and ethnicities, have waged an uprising despite maximum suppression. The society is in an explosive state. Khamenei’s standing has plummeted dramatically and he lacks all legitimacy. The Revolutionary Guards and Bassij have been hit with defections. The mullahs have lost the most important backer of the policy of appeasement, namely the United States. The avalanche of successive sanctions is hitting them hard. And the most important signal of the phase of the mullahs’ overthrow is the linkage between the fury of the people and the organized Resistance movement, something that the regime’s leaders feared.”

On the future free Iran, Maryam Rajavi said, “We call for the establishment of a society, based on freedom, democracy, and equality. We have defended and will defend gender equality, the right to freely choose one’s attire, separation of religion and state, autonomy of nationalities, equal political and social rights for all citizens of Iran, abolition of the death penalty, freedom of expression, parties, the media, and assembly; freedom of unions, associations, councils and syndicates. We espouse a non-nuclear Iran that will promote peaceful coexistence with its neighbors, and welcomes regional and international cooperation.” 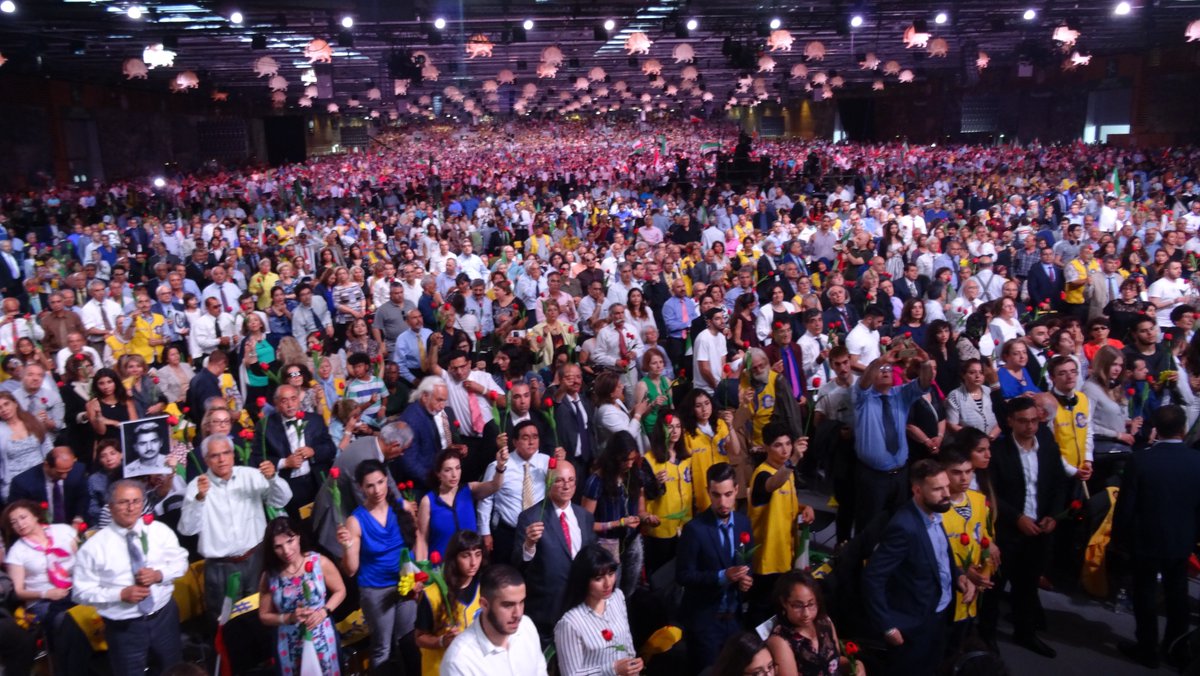 She went on to add, “In this path, the first step is to transfer sovereignty to the people of Iran. By relying on the Iranian people and a popular base, one can avert chaos and insecurity and safeguard the integrity of Iran and Iranians, rendering it a proud nation. According to the NCRI’s program, following the regime’s overthrow, a provisional six-month government will be formed, whose primary task is to form a constituent assembly through free elections with the general, direct, equal and secret ballot. This constituent assembly must draft the constitution of the new republic within two years and put it to a vote. It must also set up the principal institutions of the new republic based on the people’s vote.”

The NCRI President-elect emphasized, “16 years ago, the Iranian Resistance adopted the plan on the National Solidarity Front for the Overthrow of the Ruling Religious Dictatorship and declared that it was prepared to cooperate will all forces who want a republican form of government, who are committed to the complete rejection of the velayat-e faqih regime and who struggle for a democratic, independent Iran, based on the separation of religion and state.”

Five video reports on the extensive campaigns in various parts of Tehran and cities across the country waged by Iranian youth and supporters of the PMOI and the Iranian Resistance, declaring support for the Free Iran gathering, were among the most inspiring aspects of the rally, enthusiastically applauded by the audience.

Delegation from United Kingdom Presented a plaque to Mrs. Rajavi bearing, expressing their support for the Iranian Resistance under her leadership and her ten-point plan for a free Iran.

Dozens of declarations of support by prominent personalities and politicians, European parliamentary delegations, and senior religious leaders from various countries were presented to Mrs. Rajavi, in support of the Iran uprising and the organized resistance, and the democratic alternative, the National Council of Resistance of Iran.

In addition to the American dignitaries attending the gathering, a bipartisan statement was signed by 33 prominent American personalities, including Senator Joseph Lieberman, former candidate for Vice President; General James Jones, National Security Advisor to President Obama and former Commander of NATO; Edward Rendell, former DNC chairman and Governor of Pennsylvania; and Tom Ridge, former Secretary of Homeland Security and former Governor of Pennsylvania. The statement reads in part, “We believe that democratic change in Iran would do more than any other single event to enable stability and calm the fires of extremism in the region… The resistance movement has demonstrated its widespread roots within Iranian society, its resilience in the face of unimaginably difficult circumstances, its impressive organizational prowess, and its ability to expose secrets that Tehran is determined to keep from the Iranian people and the world at large.”

Over 50 bishops in England, Scotland and Wales, including two-thirds of the religious leaders in the British House of Lords that oversees thousands of churches across the U.K., and 78 Church leaders in the U.S., joined the Right Reverend and Right Honorable Dr. Rowan Williams, the Arch Bishop of Canterbury, in his declaration condemning the flagrant abuses of human rights in Iran, especially the rights of religious minorities and their painful situation. The signatories urged the international community to base any improvement of relations with Iran on a cessation of oppression of minorities and on a halt to executions in Iran.

Jean-Francois Legaret, Mayor of 1st district of Paris, was accompanied by 100 French mayors and elected representatives, in the Free Iran gathering where they announced the support of thousands of their colleagues in solidarity with the Iranian people’s resistance and uprising against the mullahs’ dictatorship.

The secretariat of the National Council of Resistance of Iran
June 30, 2018