NCRI – In an unprecedented conference in Paris, women who had gathered from several continents called for support for women who have risen in the Arab world to struggle against tyranny and fundamentalism and also for women of Iranian Resistance in camps Ashraf and Liberty in Iraq who are facing serious threats. This conference was convened at a time that the second group of 400 Ashraf residents has moved to Camp Liberty in Iraq.

Mrs. Maryam Rajavi, President-elect of the Iranian Resistance and the keynote speaker to the conference, while praising the heroic uprising of Syrian people, said: Women, men and children in Syria have been fighting with tooth and nail against the alliance of evil and darkness.

The axis of this sinister union is the religious dictatorship ruling Iran, which is terrified of expanding revolutions, especially by the people of Syria who are fighting to gain their freedom. This is so because the fall of Assad would shatter the mullahs’ regional alliance. It would also disrupt the balance of power within the Iranian regime to Khamenei’s detriment.

Dozens of delegations representing women’s rights advocates from Egypt, Tunisia, Afghanistan, Palestine, Iraq, Libya, Yemen, Jordan, Morocco, Algeria and Syria shared their experiences and witness accounts of the women’s role in the Arab Spring, and also in the Asian and North African nations’ stride towards democracy and freedom.

Mrs. Rajavi, pointing out the efforts of the Iranian regime in derailing revolutions in the region, said: “The mullahs ruling Iran are facing an impasse inside Iran and in order to hold on to their power they are in need of hijacking the fate of the Arab Spring as well.

To this end, many ask with concern whether the end results of these revolutions is the rule of the fundamentalists similar to Iran’s revolution of 33 years ago? And will women who so actively and emotionally participate in these uprisings, end up as the big losers? But, no; it will never be so. Since there is a solution at hand that will guide societies towards true progress and development. The answer is indeed in active participation of women and taking up responsibilities by them and leadership of women.”

In another part of her speech Mrs. Rajavi said: in order to give the peaceful solution another chance and neutralize the conspiracies of the Iranian regime, the second group of Ashraf residents demonstrated utmost flexibility and sense of responsibility and relocated to Liberty.

Now is the time that the US government and the United Nations guarantee the implementation of the minimum assurances and ensure that the residents enjoy all their rights in Liberty. Otherwise, the failure to sign an agreement or implement these guarantees by the Iraqi government will prevent the further movement of the residents from Ashraf to Liberty. 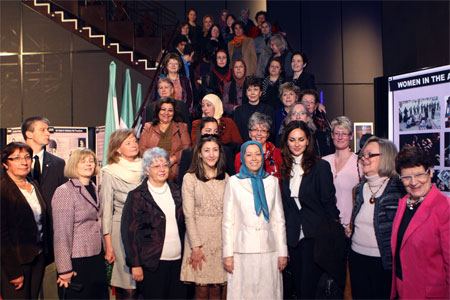 She added, The steadfastness of the Mojahedin in Ashraf and the Iranian Resistance reflect the overwhelming desire of Iranian society to attain freedom and overthrow the ruling theocracy.

They have arisen to build a democratic society, a republic based on the separation of church and state, respect for human rights, abolition of death penalty, annulling the mullahs’ Sharia laws, gender equality, active and equal participation of women in political leadership, ensuring all individual and social freedoms, including the right to choose one’s clothing and spouse as well as to divorce and custody of children and the prohibition on violence and exploitation.

Iranian women, with 150 years of struggle for freedom and equality, will build a free and democracy society on the ruins of the mullahs’ misogynous regime.

Expressing her support for the women of Ashraf and Liberty, Tasha de Vasconcelos, The Humanitarian Ambassador for European Union, condemned the violation of the fundamental rights of Liberty residents and wanted the armed forces out of Camp Liberty. She declared her willingness for visiting the camp and said, “I wholeheartedly support Mrs Rajavi for her struggle”.

Ingrid Betancourt, former Colombian presidential candidate, paid homage to the women of Ashraf and said, “Camp Ashraf was the forerunner of the Arab spring. Women of Ashraf present hope fur us and for all women in Arab countries”. She then confronted with the misinformation campaign Against Ashraf and stressed on the necessity for stopping lies and fighting the slander since “It is a way of deviating the attention from focus on the lives of 3400 human beings”.

Referring to the current developments in Camp Liberty, Rita Sussmuth, former President of German Bundestag and member of cabinet stated, “The negotiations for the second 400 Ashrafis to leave for Camp Liberty have come to an end. And once again Ashrafis and Madam Rajavi have proved greatest flexibility and we all hope conditions for the next 400 residents will be better”.

Linda Chavez, former White House Director for Public Liaison, described the situation of women of Iran as desperate. She also spoke on the US responsibilities for the security of Ashraf residents and criticized the administration on terrorist designation by stating, “If US wants to send a signal they should not designate Maryam Rajavi but they should point its fingers to the real terrorists in Tehran”.

Bariza Khiari, Deputy Speaker of the French Senate, pointed out, “I support the vanguard women in Ashraf and Liberty and I urge the United Nations and particularly the United Stated which holds the responsibility of protection of these people, to live up to their commitments. I also urge the French government to ensure the human rights of these women and men will be observed as they have done nothing wrong; they only want a democratic and secular Iran”.

Nariman al-Rossan, member of the Jordanian Parliament, declared, “What Ashraf women have accomplished is a great achievement for all women and for this we must congratulate Maryam Rajavi as the creator of this generation of women. Women of Ashraf have been qualified in Maryam Rajavi’s school of thought i.e. deep belief in equality, democracy and deep belief in the motto of ‘You can and you must’.”