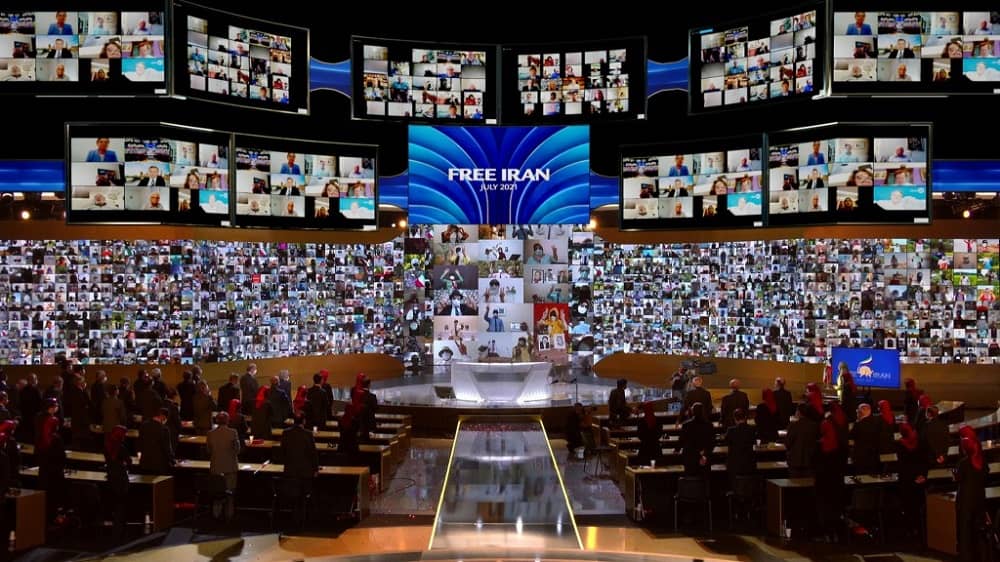 On Saturday, July 10, 2021, the three-day Free Iran World Summit-2021 commenced with the participation of Iranians and supporters of the Iranian Resistance from more than 50,000 locations in 105 countries, as well as thousands of members of the Mujahedin-e Khalq (MEK/PMOI) residing at Ashraf 3 in Albania.

In her speech on the first day of the Summit, Mrs. Maryam Rajavi, the President-elect of the National Council of Resistance of Iran (NCRI), said that [Khamenei’s] installing of Ebrahim Raisi, one of the perpetrators of the 1988 massacre of 30,000 political prisoners, as regime president, marked the greatest defeat and disgrace in the clerical regime’s history. This was a hasty move towards purging and eliminating internal factions on the path to consolidate power in the final phase of the regime. Only the regime’s fear of the uprisings and the Supreme Leader’s political demise can explain Raisi’s ascension, the henchman of the 1988 massacre. We want to bring to justice the mullahs’ Supreme Leader, Ali Khamenei, his president Ebrahim Raisi, his Judiciary Chief Gholam-Hossein Mohseni Eje’i, and others responsible for the 1988 massacre, on charges of committing crimes against humanity and genocide. We urge the UN Security Council to arrange for the international prosecution of Raisi and to hold him accountable for crimes against humanity. The mullahs’ regime will never abandon acquiring nuclear weapons, export of terrorism, and warmongering in the region. Therefore, as the main threat to peace and security, it must be subjected to international sanctions under Chapter Seven of the UN Charter.

In his speech, Secretary Pompeo said, “The theocratic regime is at its most precarious state since 1979, and its prospects of survival are openly questioned by regime insiders and challenged by a restive, freedom-loving nation.  In short: very few people actually voted FOR Raisi… This election is heavily impacted by a series of major social upheavals, including 2017, 2018, and 2019 uprisings, whose main slogan was: ‘Hardliners, reformers, the game is over now,’ and ‘Death to the dictator.’ This shakes the very foundations of the regime in its entirety… They see the corrupt ruling theocracy as their true enemy and the first and foremost cause of the economic crises. One of the most dominant slogans in the recent uprisings has been, ‘Our enemy is right here; they lie when they say it is America.’” Secretary Pompeo added: “We must continue to support the Iranian people as they fight for a freer and more democratic Iran in any way that we can. In the end, the Iranian people will have a secular, democratic, non-nuclear Republic.”

“For almost 33 years, the world has forgotten 30,000 political prisoners the victims of the 1988 massacre,” said Janez Janša, Prime Minister of Slovenia. “This situation must change. The UN Commission of Inquiry is crucial to shedding light on the horrific 1988massacre. This is especially important given the fact that the next president of the regime will be Ebrahim Raisi, who Amnesty International accuses of crimes against humanity because of his role in this massacre.”

Sen. Robert Menendez, chairman of the Senate Foreign Relations Committee, said that Ebrahim Raisi “won a sham election after the regime cleared the field of any credible challenger in which a majority of eligible voters showed their disgust by refusing to participate, leading to the lowest voter turnout since 1979… It is a further indictment of his rule that he would not only endorse but tip the scales in favor of a man like Raisi becoming president of Iran. A man who is actively involved in the forcible disappearance and extrajudicial killing of thousands of Iranian dissidents in 1988. A man who Amnesty International’s Secretary General Agnès Callamard, recently said must be investigated for crimes against humanity.”

Senator Ted Cruz warned against the policy of appeasement towards the regime, stressing, “We are seeing the fruits of that appeasement in the forms of constant attacks by Iran and by its terrorist armies on American forces and our allies across the middle east.” “I will continue leading the fight in the Senate to hold the Iranian regime accountable for their malign activities. And to return U.S. policy to one of maximum pressure until this evil and despotic regime finally collapses,” he added.

Kevin McCarthy, House Minority Leader in the United States House of Representatives, said, “I’m happy to be with you today to stand in support of a free and democratic Iran. The oppressive regime in Tehran and its new president has a history of suppressing freedom of speech, supporting terrorism, and seeking nuclear weapons. I hope that the dark days of fear under the Supreme Leader will subside as Iran blossoms into a responsible democratic nation. Imagine it. A free Iran.”

In another part of today’s Summit, amidst the most severe atmosphere of repression in Iran, video messages from more than 1,000 members of the MEK Resistance Units from inside Iran were displayed on large screens at the event, in which defiant youth stressed their readiness to overthrow the religious dictatorship.

Simultaneous with the Summit, thousands of Iranians rallied in Berlin’s Brandenburg Gate, in addition to 16 other capitals and cities around the world, including Paris, Washington, London, Amsterdam, Stockholm, Oslo, Vienna, Rome, and Geneva. These rallies were linked live with the Summit.