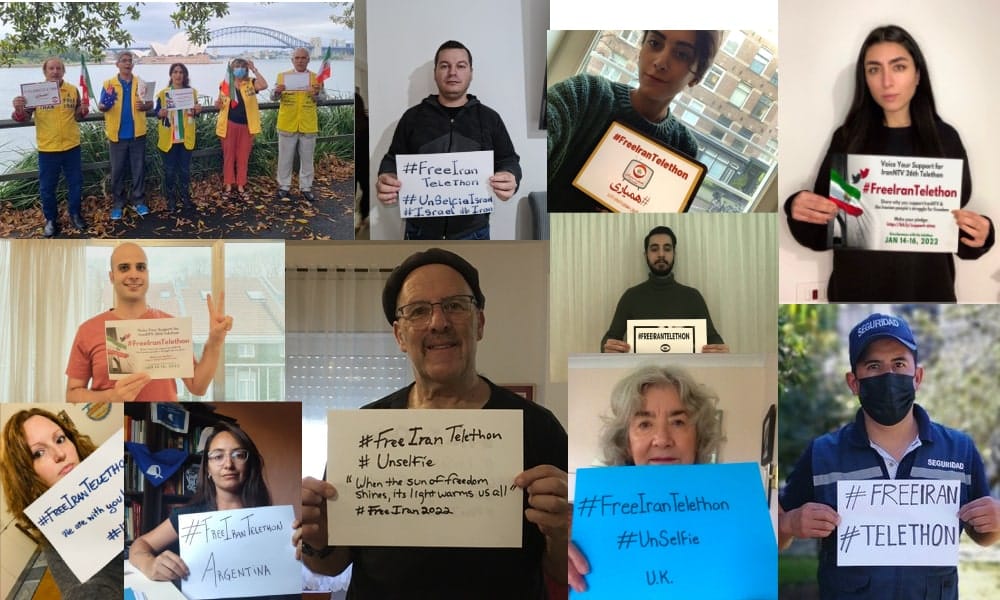 Defiant Youth and Brave Compatriots From All Over Iran and 42 Countries Support Simay-e Azadi, Stand Up in Support of the Mujahedin-e Khalq (Mek) And the Iranian Resistance Against Religious Fascism and for the Liberation of Iran

Twenty hosts worked with 28 guests with 105 telephone, internet, and video lines via Zoom and Skype during this time. At the same time, there was an uninterrupted flow of information, contributions, and raising awareness through a campaign with the hashtags #همیاری and #FreeIranTelethon on the Internet and social networks Twitter, Facebook, Instagram, and Telegram.

According to the final report of Simay-e Azadi, the total amount of contributions and financial obligations made in this telethon reached $6,665,454. The generous assistance of our compatriots to Simay-e Azadi came at a time when, in addition to the widespread poverty imposed on our people by the regime, the two-year Coronavirus restrictions have put most of the supporters, both inside Iran and abroad, in a very difficult economic and financial predicament.

Despite an increase in communication equipment and the extension of the length of the program, many compatriots and colleagues faced long delays to going on the air because of the volume of the calls. Also, it was impossible to connect many calls, play many video messages of support, and report a portion of the contributions and statements of support during the program.

In this telethon, the youth and Resistance Units from Tehran and different cities in Iran took significant risks, often waiting for hours to contact the Simay-e Azadi. The presence of women both inside and outside the country during the telethon was very significant. This indicated the leading role played by women in the struggle against the clerical regime to liberate our homeland.

Our compatriots who contacted Simay-e Azadi described this television channel as “the voice of the uprising and the Resistance Units, teachers and hardworking workers who protest every day, farmers and thirsty people of Khuzestan and Isfahan, the suffering and hardworking women of Iran who are under the double oppression of the misogynous clerical regime, porters, fuel porters, working children and rebellious people of Sistan and Khuzestan and Isfahan,” and “a light that brings hope and inspiration to hearts and homes.” They thanked Simay-e Azadi for its accurate and uncensored coverage of the facts, including news of the COVID-19 tragedy, the revelation of the regime’s secrets, the daily release of the number of fatalities, exposing the corruption and looting of ruling factions and anti-patriotic missile and nuclear projects, as well as the regime’s terrorist and regional meddling. They also offered gratitude for the broadcast of news of the Resistance Units and protest movements, and information about the activities of the Iranian Resistance in the international arena.

In its report, Simay-e Azadi described the “storm of emotions, affections, and ties with resistance and perseverance to achieve freedom” as “stark contrast to the crisis, division, and defections that have beset the religious dictatorship.”

The following are excerpts from comments to Simay-e Azadi by compatriots and supporters:

To reach a prosperous and free Iran, we will keep the lights of Simay-e Azadi brighter than ever with our help, albeit small but valuable ones.

It is our duty not to let this voice of truth be silenced. The source of all this poverty and unemployment is the disgraced Khamenei and his other criminals. I do not have much financial ability, but I am contributing 5,000,000 rials to Simay-e Azadi.

The telethon program is the voice of the very Resistance that is the only alternative to the rule of the clerics, the same resistance that exposed the bomb-making project of the Supreme Leader and turned against the anti-patriotic war and paralyzed Khomeini’s war machine. In contrast to the mullahs’ cover-up of Coronavirus fatalities, this resistance provides the actual figures every night

I am poor and stay at home due to illness, but I have a small saving of 60 million rials; I will donate this to Simay-e Azadi.

Simay-e Azadi is the light to our home and should not be turned off under any circumstances. We will fight against the corrupt and bloodthirsty regime with all our might and power, and I especially declare my readiness to help the MEK overthrow the clerical regime.

Endless greetings to the President-elect of the NCRI, Mrs. Maryam Rajavi. I am very sorry that I do not have money, but on behalf of the Resistance Units and the army of the unemployed, I present a flower to my brothers and sisters who have sacrificed their whole life for their nation’s happiness.

I wanted to tell the executioner Khamenei that we, the youth… have stood up to the end against your discrimination, injustice, and treasons. You should know that you have reached the end of the disgraceful life of your government, and the people and the Resistance Units have encircled you. I will spare no effort to establish democracy and freedom in Iran.

On the anniversary of the foundation of the MEK, we saw that a new generation of young women was elected as Joint Secretaries-General of the organization. This was inspiring and extraordinary. Simay-e Azadi facilitates spreading these values, and we see that the Iranian women and young girls in Iran stand at the forefront of the struggle.

The regime and its allies and the remnants of the monarchy claimed that there was no way to overthrow the monstrous velayat-e faqih system, seeking to keep the youth away from the organized Resistance. Still, these youths have stepped out for a full-scale struggle against Khamenei, the IRGC, and the paramilitary Basij.

I want to greet the Resistance Units and say your voice and presence were inspiring, especially during this period. I thank Simay-e Azadi, Iran National Television, for connecting us to our people inside Iran with programs such as Saat-e-Vasl. (A live two-hour weekly program where people from Iran, mainly the defiant youths and MEK supporters, call and discuss the current social, economic, and political issues).

With the courageous action of the Resistance Units in torching the terrorist Qassem Soleimani’s statue on the anniversary of his death, we saw how happy the nation became.

With a heart full of love and hope, I am offering you 1,650 billion rials as a token of my sympathy and love to you, the vanguards of freedom.

Behzad donated 1.5 million dollars to Simay-e Azadi, and in response to how he could make such a contribution, he replied, “If you are in love and feel responsible, you can even move mountains. I have been working 16-17 hours a day, six days a week, for 32 years. I have not taken a day off except to participate in the Iranian Resistance annual gatherings and MEK’s rallies. I work in place of six managers … Remembering the martyrs of the path to freedom, it is shameful for a person to forget where he was and where he came from. There was a time when I was distributing newspapers in Toronto for 20 cents. It was so cold that my mustache and hands were freezing. My car did not have a heater, and to warm up. I had to pull off to the side in the street and hold my hands near the car’s exhaust pipe to warm up. I started there … I made a commitment to myself that I would be with the MEK no matter what happened. In response to your question, I must say that it is love and responsibility. Love for the leadership, love for the organization, and love for every MEK member and their supporters.”