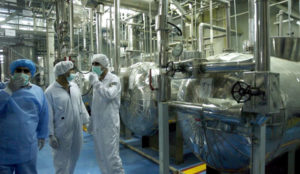 In a blatant attempt to blackmail Western intelocutors, Behrouz Kamalvandi, the deputy spokesman for the Iranian regime’s Atomic Energy Organization, threatened that the regime would enrich Uranium up to 90 percent. Once again, this shows that the clerical regime has never put aside the idea of producing an atomic bomb. “We can easily enrich (uranium) to any percentage, even over 40%, 60%, and 90% … Nevertheless, the parliament’s resolution stipulates that if there is a need for enrichment above 20%, the organization should, make it happen, and the Atomic Energy Organization will do its research in this regard.”

In a statement, the International Atomic Energy Agency (IAEA) said on Monday, January 4, 2021, “Iran today began feeding uranium already enriched up to 4.1 percent U-235 into six centrifuge cascades at the Fordow Fuel Enrichment Plant for further enrichment up to 20%.”

On January 6, Ali Rabiei, Rouhani’s spokesman, announced the start of 20% enrichment at the Fordow site on Rouhani’s orders, saying, “The process of gas injection to centrifuges has started a few hours ago and the first product of uranium hexafluoride (UF6) gas will be available in a few hours.” (Mehr News Agency, January 4, 2021)

Ali Akbar Salehi, the head of the regime’s Atomic Energy Organization, told state TV on January 6, 2021, “Rouhani has ordered the provision of the necessary funds for the 20% enrichment project …” (IRNA, January 6, 2021)

The actions of the clerical regime over the past year, the start of 20% enrichment, and the preparation for 40, 60, and 90% enrichment confirm the fact that the regime has never give up on the project of building an atomic bomb.

By taking advantage of the political situation in the United States, the clerical regime intends to blackmail and extort its Western interlocutors to lift sanctions, turn a blind eye on its nuclear missile programs and its criminal interventions in the region. As the Iranian Resistance has repeatedly stated, the re-imposition of six Security Council resolutions, the complete halt to enrichment, the closure of nuclear sites, and anywhere, anytime inspections are indispensable to prevent the regime from acquiring a nuclear bomb.

Secretariat of the National Council of Resistance of Iran (NCRI)
January 9, 2021

Previous article
Stop Treating Iran as if Its Demands Come From a Position of Strength
Next article
Iran: Targeting the Provincial Center of Plunder in Response To the Destruction of a Compatriot’s Store