Iran-Nuclear: Khamenei insists nuclear activities will not be halted 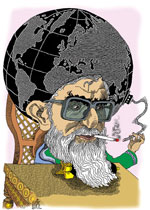 NCRI, October 22 – During Tehran’s Friday congregation, Supreme Leader Ali Khamenei reaffirmed the decision to continue the nuclear program, underscoring that the ruling theocracy "has obtained the know-how and technology" and would not abandon it.

He rejected increasing international concern about the regime’s 18 years of concealment and deception as well as the recent resolution by the International Atomic Energy Agency calling on the regime to stop its nuclear activities. Khamenei said, "We acquire knowledge, we discover the secrets to use this knowledge to produce some material and we obtain it. When we learn how to do this, we produce the minimum means. We want to replicate, make complete use, they don’t allow us, and they stop us. This is what has happened. This is not acceptable to the Iranian nation."

He added, "The country’s officials share the same view and decision" to continue the nuclear program; "work on this has been carried out through collective discussion and decision-making." In a bid to dismiss the IAEA resolution that passed with only one negative vote, Khamenei said, "The main enemy in this case is the United States. The problem between the Iranian nation and the government of Britain is not one of yesterday or today. Even now, they are taking a very bad position, from the leadership to other officials. Their positions are very bad. But, the main enemy is the US government and, most of all, this warmongering, hard-line and extremist administration is after an empire, a global domination."

On October 6, US President George Bush said, "Iran [has] a long history of collaboration with terrorists," implicitly blaming it for trying to install an "Islamic Empire."

On Monday, Khamenei laid bare the regime’s expansionist objectives. He said, "A human being, a party, or a grouping cannot confront the challenges of today’s world. The only entity capable of challenging the hideous world order is a common international entity that is taking shape with the Islamic Republic of Iran at its core… We have strategic depth in other Muslim nations. We are able to challenge the condensed economic power that the evil entities have created for themselves. They must be challenged. Who can do this? A collective international entity."

Khamenei’s brazen remarks leave no doubts as to the clerical regime’s ominous objectives in acquiring nuclear weapons as well as dominating Iraq and other Muslim countries. These make it evermore imperative for the international community to adopt a decisive policy, including the referral of the regime’s nuclear file to the United Nations Security Council for the imposition of a comprehensive oil and technology embargo.

Secretariat of the National Council of Resistance of Iran
October 22, 2005