NCRI, October 22 – The following is the full text of a speech by Mrs. Maryam Rajavi, President-elect of the National Council of Resistance of Iran, to the U.S. congressional briefing on Iran via live satellite broadcast, October 20:

I would like to begin by sending my greetings to all of you from afar. I also deem it necessary to thank, on behalf of the Iranian Resistance, the honorable members of the United States House of Representatives and the Senate who have supported the Iranian people and their Resistance for freedom in the darkest period of their history. 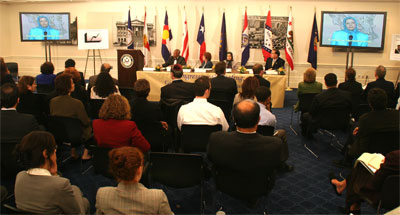 The Iranian people are suffering under a fundamentalist and suppressive regime that has imposed precarious and bitter era on my homeland. By exporting Islamic fundamentalism and terrorism and by insisting on obtaining nuclear weapons, it has brought about harrowing days for the world and an ominous period of chaos in our neighboring country, Iraq.

Without being in control of all the powers of a state, Islamic fundamentalists would lack the means to spread their message of hatred and terror. They could not have posed a threat as perilous and grave as they do today. Fanatical and violent strands of Islam have existed for a long time. But Islamic fundamentalism became a threat to peace and tranquility only after the radical mullahs came to power in Iran a quarter century ago.

The Islamic fundamentalists’ vital need for an apparatus of government reflects itself in the common desire to set up a global Islamic rule. This common denominator overshadows their differences. Khomeini claimed to be a Shiite, but he repeatedly lamented the fall of the Sunni Ottoman Empire. Islamic fundamentalists look to Tehran not only as a state sponsor, but also as a model state.

As for the mullahs in Iran, they see the export of Islamic fundamentalism as the only means of survival, because they are hated by 95 percent of the Iranian people.

The mullahs have been using terrorism as a lever of power from Day One. These include, for example, the occupation of the U.S. embassy in Tehran, the bombing of the Marines compound in Beirut, the massacre of pilgrims in Mecca, the assassination of Iranian dissidents abroad, and the bombings in Buenos Aires and Al-Khobar, as well as a series of hostage takings and hijacking and setting up and supporting terrorist proxies, and insisting to continue the eight-year war with Iraq.

In a speech three days ago, Supreme Leader Ali Khamenei unveiled the regime’s expansionist ambitions, saying that "a human being, a party, or a grouping cannot confront the challenges of today’s world. The only entity capable of challenging the hideous world order is a common international entity that is taking shape with the Islamic Republic of Iran at its core… We have strategic depth in other Muslim nations. We are able to challenge the condensed economic power that the evil entities have created for themselves. They must be challenged. Who can do this? A collective international entity."

In a nutshell, the Iranian regime is the main driving force and the beating heart of Islamic extremism and terrorism and claims to be the leader of 1.5 billion Muslims.

I agree. But for two decades, Western governments did not have a clear understanding of the true nature of Islamic fundamentalism and its engine, Iran. Also, for many of these governments their trade with Iran was more important than strategic considerations. These have turned the mullahs into the most serious challenge to the international community.

The European Union’s policy of appeasement gave Tehran the best opportunity to complete its nuclear projects. The Iranian regime’s officials boast that the two-year talks with the EU, gave them major economic, security and political concessions.

I said before a gathering of Iranians in London in December 2003 that the danger of the mullahs’ meddling and terrorism in Iraq is a hundred times more than their nuclear threat.

Two years later, in the absence of a firm policy, the Iranian regime is playing a much more dangerous role in Iraq. Iranian agents have infiltrated Iraqi ministries, offices, army, police, and security forces. They are now in control of much of southern Iraq. They have used economic, political, religious and diplomatic resources to turn the political dynamics in their favor.

For two decades in the West, some said that engagement would strengthen the so-called moderates in the mullahs’ regime. But this policy has backfired. The mullahs’ new President Mahmoud Ahmadinejad said recently, “The waves of a new Islamic revolution will soon reach across the globe.”

Iraq is the first target of this wave. The rise of Iranian meddling in Iraq has alarmed not only the United States and Britain, but also Saudi Arabia, Jordan and other countries in the region.

Iraq today is the primary battleground for the mullahs as they seek to set up an Islamic Empire. They will never allow democracy to flourish in Iraq or anywhere else in the Islamic world. They make use of the democratic process to spread fundamentalism and terrorism.

This brings me to the third issue: what is the solution to this problem?

The policy of appeasement brought to power the most radical factions, led to a tougher nuclear policy and export of terrorism and fundamentalism.

The only realistic option is democratic change by the Iranian people and Resistance. The Iranian people have so far offered 120,000 martyrs in the confrontation with this barbaric regime. They are prepared to pay even a greater price.

The Iranian people are fed up with the mullahs’ oppression and deception. Iran is ready for change. In the first six months of this year alone, Tehran and other Iranian cities have been the scene of 1,300 antigovernment demonstrations, protests, strikes and sit-ins by different sectors of society. By boycotting the sham presidential elections, the Iranian people expressed their desire for change.

But there is a big obstacle in the way of change. That is the terror label against the main component of the Iranian opposition, the People’s Mojahedin Organization of Iran (PMOI). Eight years ago, senior U.S. officials acknowledged that this label was a "goodwill gesture" to the mullahs in Iran in the context of "opening up" to the Tehran regime.

The EU also blacklisted the PMOI at the behest of the mullahs. The terror tag, which lacked any legal basis or legitimacy, is the biggest concession by the West to the mullahs and represents the biggest obstacle to the Iranian people’s resolve and desire for freedom.

The United States government and other member-states of the coalition declared after 16 months of investigation into all PMOI members in Ashraf City, Iraq, that there was no basis to charge any of them. They were recognized as protected persons under the Fourth Geneva Convention. So this terror tag is no longer justified.

Some 2.8 million Iraqis signed a petition last April and called for the continuing presence of the PMOI in Iraq. They asked for the removal of the terror tag on the PMOI. The Iranian people have been making the same demand for years.

The National Council of Resistance of Iran is committed to the Universal Declaration of Human Rights. We want to create a pluralist democracy. We want the separation of Mosque and State, gender equality, and an end to all forms of discrimination against ethnic and religious groups.

We want a non-nuclear Iran free of weapons of mass destruction. We want equal ties with the rest of the world. We want peace, democracy and security in the region.

As every day passes, the world loses another opportunity to confront the threat of Islamic fundamentalism. The mullahs need precious time to obtain nuclear weapons and dominate Iraq. The lack of a firm policy vis-à-vis the ruling theocracy in Iran gives the mullahs the time they need, making war inevitable. History tells us that this is just what happened when Europe appeased Nazi Germany.

President Bush said that America stands “with dissidents and exiles against oppressive regimes.” He has given hope to the Iranian people that the U.S. government will adopt a firm policy toward the mullahs’ regime.

Such a policy must have three components:
Refer the Iranian regime’s nuclear and terrorism files to the UN Security Council; stop its meddling in Iraq and remove the PMOI from the terror list. Removing the PMOI from the list will send a clear signal to the Iranian people. It will tell them that the United States is standing with them in their struggle for freedom.

The fundamentalists who rule Iran are on their way out. The Iranian nation is determined to bring down the unelected and loathed rulers and herald freedom and popular sovereignty.

As the great America statesman Thomas Jefferson said more than two hundred years ago, Resistance has become morality in my homeland, where the tree of liberty has been replenished with the blood of Iran’s patriots in the past two decades. Today, in Iran, the cry is freedom. In the name of justice, peace and humanity, I call upon you to assist the Iranian people and Resistance.