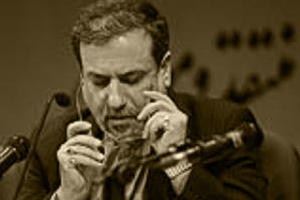 • The EBW exploding detonators belonged to Ministry of Defense
• We declared Fordow to IAEA only when we learned it had been discovered
• If we just judge the nuclear program on its economic merits, it has been a huge loss
• In breach of UNSCR 2231 we shall neither close down our missile program nor stop sending arms to Hezbollah

NCRI – Abbas Araqchi, Deputy Foreign Minister of Iranian regime and the principal negotiator in nuclear talks with P5+1, acknowledges in a private briefing of state radio and television directors and editors on August 1 some of the big falsifications made to the International Atomic Energy Agency (IAEA). He said that the Vienna accord is different from UN Security Council Resolution 2231 and that the Iranian regime is not planning to implement all its articles. Apparently, some of the statements by Araqchi were inadvertently posted on state radio and television website, but they were quickly taken down by orders from regime’s Supreme Security Council. Some of Araqchi’s statements were as follows:

1. Araqchi said that the West “turned Iran’s totally technical file into a political one because of the PMD (possible military dimension) and they constantly worked with the IAEA giving it more information that made the matter worse. It was so that EBW (exploding bridgewire detonators) were revealed. You ask the friends at the Ministry of Defense; they are greatly distressed because of the leak of information that made things worse.”

This is despite the fact that the Iranian regime has repeatedly attempted to portray exploding detonators as of non-military and non-nuclear nature and claims that these detonators are used in oil and gas explorations. IAEA report of 26 May 2008 (supplement to page 2) states: “The Agency asked about the possible involvement of an Institute of Applied Physics (IAP) staff member in Iran’s work on EBW detonators;… Iran stated that the person concerned was not involved in work related to EBWs and that the procurement requests were related to well logging for the oil ministry.”

IAEA report of September 2014 states that the IAEA Director General noted that Iran also offered information and explanations about its activities after 2007 regarding the employment of EBW detonators in gas and oil industry that is not inconsistent with professional procedures in this industry.
2. On another subject Araqchi admitted that the regime had no intention to reveal Fordow and reported this site to the IAEA only when it found out that the site has been disclosed. He said: “When we learned that Fordow has been discovered, just before they announce it we got ahead of them and we quickly ordered Mr. Soltania (regime’s then IAEA representative) to declare the site to the IAEA and he did so in a letter to Mr. Baradei… When he referred to give the letter, he was told that Mr. Baradei had gone to the airport to go to Washington. However, Mr. Soltania went to the airport and handed him the letter.”

It should be reminded that the beginning of construction of Fordow was first disclosed in a press conference by the National Council of Resistance of Iran (NCRI) on December 20, 2005.

3. Araqchi also stipulates that the nuclear program is an economic loss for the country alluding to the fact that the principal objective is the acquisition of the nuclear bomb. He stated: “I have repeatedly said that if we are to judge the nuclear program of our country solely on its economic merits, it has been a huge loss. In other words, if we calculate the cost of production, we can’t even imagine the cost.”

4. Araqchi brazenly talked about regime’s intention not to implement UNSCR 2231: “Our missiles are outside the Security Council jurisdiction since they are not designed for this purpose. Moreover, we stop at nothing in order to increase our defensive capabilities and to protect the sovereignty and security of our country … Ultimately, if someone comes along and claims that Iran’s missile program has violated the Security Council resolution; yes, we have violated it, but we have not violated the [nuclear] deal.”

5. Araqchi stipulates: “It is the official stance of this ministry that the Islamic Republic of Iran will continue to help its regional allies and friends to confront terrorism… We cannot stop sending weapons to Hezbollah and we are not prepared to sacrifice them for the sake of our nuclear program. Thus we shall continue with our work.”

Araqchi clearly demonstrates that deception and cover up and constant breach of international resolutions and agreements are part and parcel of regime’s nuclear program and any hope for verification is an illusion. Any verification is only possible through snap inspections anywhere, anytime.

Previous article
PMOI member passes away in Albania. He is the 26th martyr of medical blockade
Next article
55-year-old mother of three to be executed in Iran