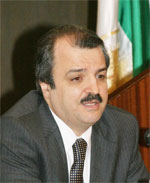 NCRI – The theocratic regime in Iran has told the International Atomic Energy Agency on Tuesday that it will resume suspended nuclear-fuel research on January 9, thereby taking another step toward the acquisition of nuclear weapons in the face of international inaction.

Mohammad Mohaddessin, Chair of the Foreign Affairs Committee of the National Council of Resistance of Iran, said, “The decision not to refer Tehran’s nuclear file to the UN Security Council in November, continued negotiations in Vienna last December, as well as the Russian proposal, have emboldened the regime to defy the international community’s will, and have given it time to move closer to producing nuclear weapons.”
“Continued inaction and hesitation in adopting comprehensive international sanctions against the religious fascism ruling Iran, will be the biggest mistake by the international community in dealing with the clerical regime’s nuclear weapons ambitions,” he added.
Secretariat of the National Council of Resistance of Iran
January 3, 2006