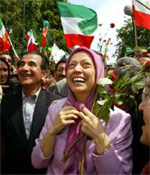 Agence France Presse – The managing director of Iranian economic newspaper Asia on Tuesday slammed a government ban on his paper as "politically motivated".

"It is certainly a politically motivated move," Iraj Jamshidi told AFP by telephone. "They are using the publication of pictures of Ms Angela Merkel with Mr Jacques Chirac and Ms Condoleezza Rice as a pretext."
He said that the pictures showed the female German chancellor shaking hands with the male French president as well as the American secretary of state in an informal pose, all of which could be considered un-Islamic by hardliners.
"They are saying the publication of such pictures are against the Islamic code and spread immorality and decadence, but all of it is pretext to stop the publication of an independent newspaper which has no dependence on government subsidies," Jamshidi added.
Jamshidi voiced concern that it was now Iran’s Culture and Islamic Guidance Ministry that closed media, whereas in the past newspaper closures were carried out by the Islamic republic’s hardline judiciary.
During the term of Iran’s former reformist president Mohammad Khatami, hundreds of print media outlets were shut down and scores of journalists imprisoned by Iran’s hardline judiciary as part of a crackdown.
Asia daily was itself closed on order of the government from June 2003 to March 2005 after publishing a photo of Maryam Radjavi, leader of the armed opposition People’s Mudjahedeen, which is outlawed in Iran as a terrorist organisation.
Jamshidi was imprisoned for 13 months at the time, and on Tuesday said he had just received a further penalty in connection with the case that meant he was not allowed to work for any media for a year.
He also said meetings he had with Western ambassadors to Tehran in his office were "a part of his incrimination."
"I repeatedly met French, German, British and Canadian ambassadors in my office, and I also did interviews with foreign media."
"Unfortunately with the closure of my paper, more than 250 of my staff will be unemployed, ironically during the term of a president (Mahmoud Ahmadinejad) who claims that he want to fight unemployment," Jamishidi said.