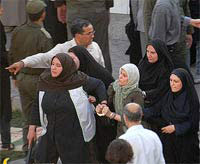 NCRI – During the protest of March 8 in Tehran, the brave youths clashed with the regime’s suppressive agents in Sadeghieh. A big number of demonstrators were arrested and transferred in buses to suppression centers.

There were a big number of protesters on the streets and alleys and circle of Arya-Shahr. Suppressive forces, especially the ant-riot guard, were stationed on the streets as people started their protests; however, more forces were dispatched after the dark.
Protest gatherings were still going on after 21:00 in locations such as Arya-Shahr and Azadi, Ferdowsi and Haft-e Tir squares.

At 20:30, the suppressive forces started shooting into the air aimed at dispersing the crowd in the Jamalzadeh Ave. and nearby side streets.

Plain-clothes agents attacked, beat and wounded the crowd who were on Enghelab Ave. up to Azadi sq.

At 19:00, the regime’s plain-clothes and intelligence agents were taking pictures and films of the demonstrators who were marching from Enghelab Ave. toward Navvab in order to intimidate and identify them.

There were also a heavy crowd of brave youths and women on Salsabil Ave. who took part in today’s protest gatherings.

Secretariat of the National Council of Resistance of Iran
March 9, 2011