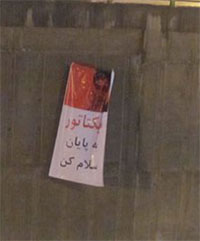 NCRI – Despite the Iranian regime’s extensive security measures, the brave demonstrators installed a large placard in the intersection of Niavaran-Park Nejad Boulevard, northern Tehran, reading “Dictator, embrace your end”. Through this courageous act, the protesters showed their hatred of the regime’s blood-thirsty velayat-e faqih.

At 9 p.m., hit and run clashes continued in Karegar Ave. up to Enghelab Street.

In Enghelab Street the demonstrators created barriers by making bonfires which filled this part of the city with smoke.

At the intersection of Enghelab and Behboudi streets, suppressive forces arrested a number of young boys and girls.

At around 6:00 p.m. at the intersection of Azadi and Towhid Avenues, Revolutionary Guards attacked mass crowds with motorcycles in an attempt to disperse them. Courageous women protested to this barbaric act by chanting anti-regime slogans. Plainclothes agents, who were among the demonstrators, beat women in particular. Many women were detained and taken to unknown locations with vans.

At Avesta Park, located in Azadi Street, State Security Forces fired teargas and live ammunition in the air, in an attempt to frighten demonstrators.

Secretariat of the National Council of Resistance of Iran
March 8, 2011