2. Regime’s Cyber Unit forged an email purporting to be from Ms. Badri Pour-Tabakh, the Deputy Secretary-General of the People’s Mojahedin Organization of Iran (PMOI/ MEK), and mass emailed messages to members and supporters of MEK to deceive them and gain their trust for later exploitation and information gathering operations. In one of these forged messages, it writes, “You have probably seen the regime’s recent ploys on the resistance’s satellite TV (IranNTV) in trying to send thousands of Basiji mercenaries under the guise of MEK families to Ashraf 3, in Tirana (Albania)… An example of their communications is attached for you to show the proper reaction. Forward this message to all supporters and contacts. Signature: Badri”.

Ms. Pourtabakh does not use email as a medium in her communications with Resistance supporters.

3. In a despicable retaliation to the statement of 600 political prisoners [exposing an agent of the MOIS called Iraj Mesdaghi, who promotes himself as an ex-political prisoner while demonizing the main opposition organization, the MEK], the clerical regime’s Intelligence Ministry created a fake email account under the name of Mr. Farzin Hashemi, from the Foreign Affairs Committee of the National Council of Resistance of Iran (NCRI). It sent emails to a number of the signatories of the statement, saying, “You had previously taken the efforts to sign the statement against Mesdaghi in 2014. Would you mind reaffirming your signature on a newly dated statement, making it firmer and more up to date? Thanks, Farzin.” 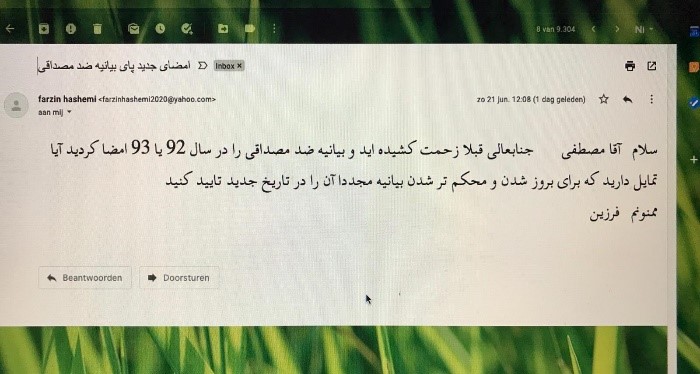 The intention was to test the targets to undermine the statement and the recent programs broadcasted by Resistance TV, exposing this MOIS agent.

4. On Sunday, June 7, 2020, following an outpouring of solidarity in honor of Marjan, a well-known actress and singer supportive of the Iranian Resistance who passed away on June 5, the regime published a fake copy of the “Mojahed” newspaper (MEK’s official publication that is no longer published) showcasing photos of several Iranian artists and athletes who had condoled her loss, in a bid to force them to renounce the main opposition MEK. 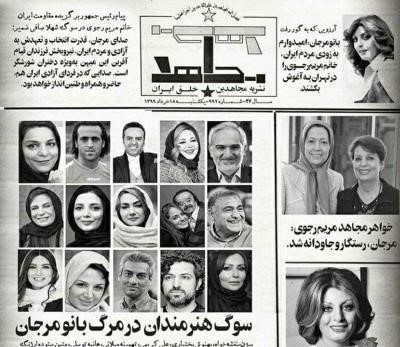 5. On June 17, a website affiliated with the Ministry of Intelligence called “Martyrs of Iran” utilized a fake Twitter account impersonating Mrs. Maryam Rajavi, the President-elect of NCRI. The site published the phony account’s tweet, in which Mrs. Rajavi thanked Tehran’s city council for naming a street after Mehdi Bazargan, (deceased first post-revolution prime minister of Iran. Bazargan was pressured by Khomeini and later resigned in protest to the regime’s extremist policies). The fake tweet aimed to deliberately pressure the city council to cancel the naming of the street for Bazargan. 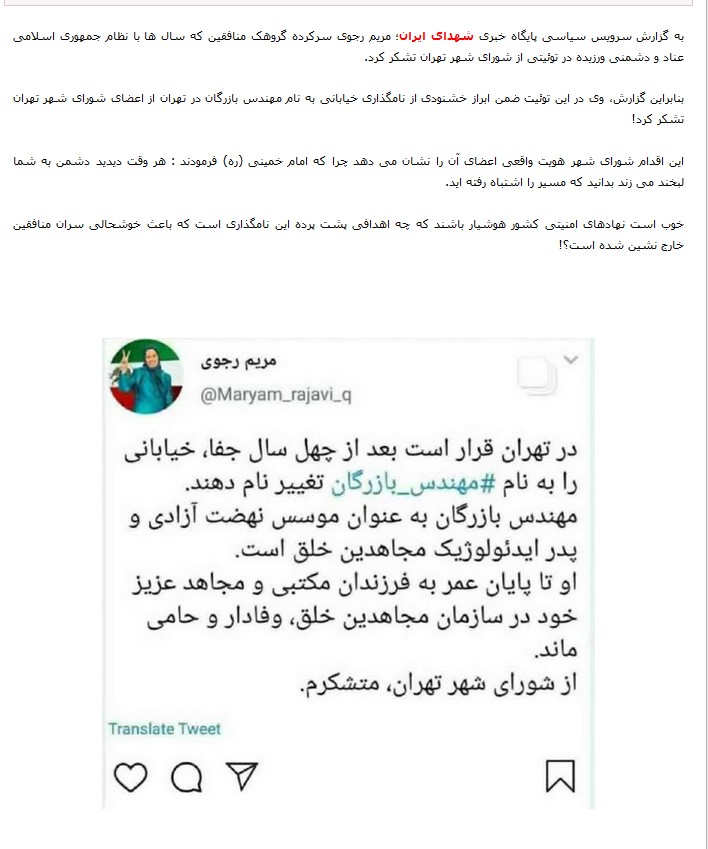 6. Last year, on July 17, 2019, the regime used another fake Twitter account impersonating the French Consulate General in Jerusalem to announce, “Maryam Rajavi’s visit to Israel.” The French Foreign Ministry subsequently officially denied “The fake Twitter account on behalf of the French Consulate in Jerusalem,” and stated, “The Consul General of France in Jerusalem, Mr. Pierre Cochard, has been subjected to identity theft on the social network Twitter.” 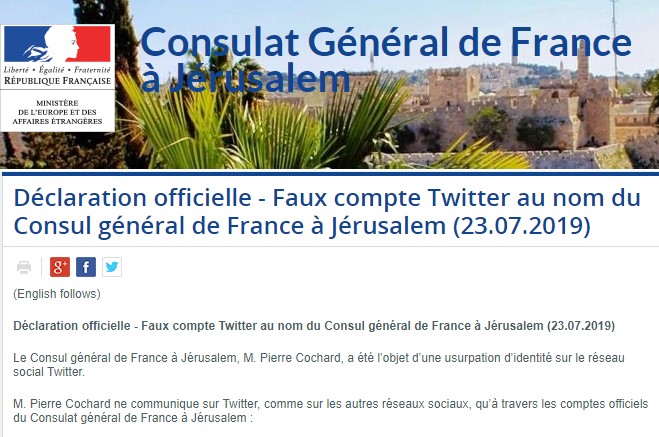 7. A few weeks later, on October 30, 2019, the regime released a thread of six more fake tweets, impersonating Alexis Kohler, head of the French presidential office, against the MEK.  Since the tweets did not grab anyone’s attention in France, the MOIS Cyber units retweeted the same thread through their infamous agents living in the West (Masoud Khodabandeh and Siamak Naderi), claiming, “The head of the French presidential office has announced that the MEK will be expelled from France soon!” At that point, the Elysée Palace denied the report and said that this was not the position of Elysée, adding that Kohler does not have a Twitter account.

The Security and Counter-Terrorism Commission of the NCRI once again draws the attention of the general public, especially the supporters of the Resistance and MEK, to the failed and desperate cyber ploys and conspiracies of the clerical regime and the need to expose and neutralize them. Avoid replying to such emails, phone calls, and any anonymous communications, including on Telegram, Skype and WhatsApp, and any other means of communication. Share the suspicious cases with the representatives of the NCRI or the offices of the MEK in different countries and warn other compatriots and supporters about the enemy’s scams.

Previous articleLatest News in Brief – June 30, 2020
Next articleStruan Stevenson: The Truth is Out About Iran’s Economic Meltdown