The People’s Mojahedin Organization of Iran (PMOI) announced this afternoon, June 30, 2020, that Coronavirus has taken the lives of more than 63,200 in 341 cities across Iran. The death toll in various provinces include: Over 16400 in Tehran, 2325 in Lorestan, 1890 in East Azerbaijan, 1725 in West Azerbaijan, 1295 in Kurdistan, 625 in Hormozgan 420 in Chaharmahal and Bakhtiari, 325 in Kohgiluyehn and Boyer Ahmad. This is in addition to reports obtained from other provinces.

The office of Mr. Struan Stevenson, the coordinator of the Campaign for Iran Change and a former Member of the European Parliament, released a press release titled “Iranian arrest warrant for US President described as risible”.
“While President Trump is in no danger of arrest, Iran’s gangster foreign minister, Javad Zarif, who almost certainly ordered the Assadi bomb plot, may find himself and other criminal leaders of the regime, indicted for acts of terrorism and crimes against humanity, particularly the horrific massacre of over 30,000 political prisoners in 1988, in one of the worst crimes against humanity of the late twentieth century. The mass execution of these political prisoners, most of whom were supporters of the main democratic opposition Mojahedin e-Khalq (PMOI-MEK) organisation, was ordered by the then Supreme Leader Ayatollah Ruhollah Khomeini and involved special death committees, whose active participants still hold many senior government positions to this day,” the statement reads in part.

As the clerical regime in Iran is facing the most challenging crisis of its life and is fighting for its survival, in a desperate bid to tarnish the image of the democratic opposition, it is resorting to spreading of more disinformation about the main Iranian opposition movement People’s Mojahedin Organization of Iran (PMOI-MEK) and the coalition of the National Council of Resistance of Iran (NCRI). 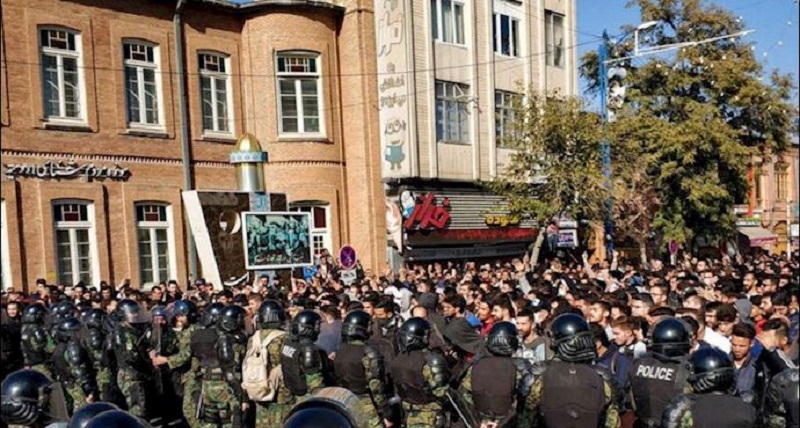 Within the last two weeks, the Iranian regime has mounted oppressive measures. The mullahs’ Judiciary has upheld several death sentences for those arrested during the nationwide Iran protests in November 2019. But this increasing oppression confirms the Iranian society’s restiveness and that the regime has lost its control. Nevertheless, it does not undermine the necessity of the international community taking action to prevent bloodshed in Iran.

After shocking social phenomena in Iran such as grave-sleepers, underground dwellers, slum-dwellers, and women living in holes and canals, there is now a new shocking issue: people living on rooftops. The Iranian regime’s ominous rule has brought nothing but poverty, destitution, destruction, and war for the Iranian people.

On June 29, Mr. Struan Stevenson, the coordinator of the Campaign for Iran Change and a former Member of the European Parliament, wrote an article on the United Press International (UPI) website.

In this article, Mr. Stevenson examines the dire economic situation of the Iranian regime and addresses the crises facing the regime. He touches on the crisis of widespread poverty of tens of millions of Iranians and the increase of the coronavirus outbreak in Iran and the crisis of devaluation of the national currency. But in this situation, the regime continues to waste the nation’s resources on expensive missile tests while the Iranian society is in an explosive condition.

My new article on #Iran#Iranian economy has collapsed.Ayatollahs can no longer afford to pay the wages of government employees, as triple whammy of U.S. sanctions, #coronavirus pandemic & rampant corruption reduce their budget to chicken feedhttps://t.co/zxKPD9Z6Sb

A court in Hamburg ordered on June 25, the German newspaper Frankfurter Allgemeine Zeitung (FAZ) to immediately remove false allegations raised against the Iranian opposition People’s Mojahedin Organization of Iran (PMOI/MEK). In its May 13 article “The Devil Should Be Living in Tirana” referred to Ashraf 3 is home to around 3,000 MEK members located near Tirana, the capital of Albania the FAZ mentioned allegations such as “torture” and a “ban on visiting relatives” imposed on MEK members. But the court ruling read: “Even if these claims were stated as alleged, it is not evident that its principles were adhered to.”

The lawsuit contested three false allegations published by FAZ and ordered to pay a fine of up to €250,000 to be determined by the court for each case of the offenses against MEK members in Albania and to bear the cost of these court hearings. If this amount cannot be secured, a detention order of up to a maximum of six months (for each item in place of the maximum fine of 250,000 Euros, for a total of a maximum of two years) will be issued.

Crisis in Tehran and Mashhad

On Sunday, June 28, three environmental activists, Mokhtar Khandani from Nosud, Yasin Karimi from Shamshir village, and Bilal Amini, a resident of Paveh, were killed while trying to contain the blaze in the mountains of Markhil of Paveh. Several others suffered burns.

“We will take back Iran from the mullahs” : PMOIMEK Resistance Units

“We will take back Iran from the mullahs” : PMOIMEK Resistance Units

A Message to the World Community

The overthrow of the clerical regime remains to be the unyielding demand of the Iranian people, and the uprisings in November 2019 and January 2020 represented the people’s burning commitment to implement it.
With their protests and strikes, and the activities and operations of Resistance Units, every day, the Iranian people move closer to overthrowing the regime.
It is for the realization of this goal that political prisoners continue to persevere in prisons across Iran and stand up to Khamenei’s henchmen.
It is up to the international community to hear this message:
The Iranian regime should not be allowed to obtain even a single bullet.
It should not pocket even a single dollar in oil revenues.
It should not spend even a single dollar out of revenues that belong to the Iranian people.
The Iranian Resistance seeks the restoration of the six UN Security Council resolutions against the regime.
We emphasize the extension of international sanctions against any form of weapons trade with the regime.
The global community must recognize the right of rebellious youth, Resistance Units and the Iranian people to resist against the religious tyranny.
The leaders of this regime must face justice in international courts for the killing of 120,000 children of the Iranian people, including the 1988 massacre of 30,000 political prisoners, and the killing of over 1,500 Iranian protesters in November 2019.

A Message to the World Community

Tuesday, June 30, 2020, marks the 228th day since the beginning of the nationwide Iran protests.

Previous articleIran: Coronavirus Death Toll in 341 Cities Surges Past 62,600
Next articleForged Emails and Messages by Iran’s Ministry of Intelligence and Its Cyber-Terror Unit