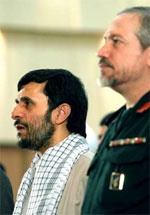 NCRI, October 30 – In a gathering of the Revolutionary Guards and the para-military Bassij this morning, the mullahs’ President Mahmoud Ahmadinejad reiterated that his recent remarks against Israel, which drew international condemnation, had been said before. While threatening Arab and Muslim countries, he said, "What was new in my remarks was that for 50 years, [the West] has tried to make people recognize the existence of a usurper country. Today, using the withdrawal from Gaza Strip as an excuse, they are trying to coerce other nations to break the taboo of recognizing this usurper regime. The Islamic Ummah (nation) will stand up to this effort."

In the same speech, Ahmadinejad said the decision to "voluntarily suspend the fuel cycle at Natanz" was wrong, adding, "The previous government believed that if we engage in confidence building by going transparent they would give us our right. Thus, we retreated to the point of suspending voluntarily the fuel cycle at Natanz. Today, we have reached the conclusion that they [the West] are lying and will not allow us to have the nuclear fuel cycle. We concluded, therefore, that we must resume work at Isfahan [site]."

Ahmadinejad’s brazen insistence on his previous remarks about Israel and his emphasis on the resumption of the nuclear projects, despite a United Nations Security Council censure and international outrage, make it even more imperative that international sanctions against the regime, which the Iranian Resistance Leader Maryam Rajavi has called for, be imposed immediately.

As Mrs. Rajavi has stated repeatedly in the past, as long as this medieval regime remains in power, there would be no democracy in Iran and peace and tranquility in the region. Democratic change through the Iranian people and Resistance is the only viable option to confront the mullahs’ religious dictatorship, which is not only the enemy of the Iranian people but also the enemy of peace, democracy and human rights.

Secretariat of the National Council of Resistance of Iran
October 30, 2005