Gjergji Thanasi, an agent, whose services to the Iranian regime’s embassy and its intelligence station in Albania, had been previously exposed by the Security and Counterterrorism Committee of the National Council of Resistance of Iran, is currently in Parsian Evin Hotel in, near Evin prison in northern Tehran.

This agent uses the cover of a journalist for his criminal activities. Once Thanasi realized that the People’s Mojahedin Organization of Iran (PMOI/MEK) had found out about his trip to Iran and his stay at Hotel Evin, he pre-emptively posted the news about the trip to Iran and stay at Parsiyan Evin hotel on his Facebook page.

Last year, he had filed suit against Mr. Behzad Saffari, the MEK’s legal advisor, for accusing him of serving the Iranian regime’s embassy in Tirana and cooperating with Tehran’s intelligence station in Albania to contact the so-called MEK defectors and to slander the Iranian Resistance.

The NCRI’s Committee on Security and Counterterrorism again underscores Thanasi’s involvement in espionage and terrorist offenses and calls for his prosecution and punishment by competent Albanian courts. 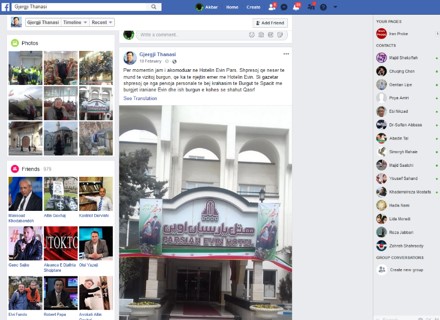