Rouhani Acknowledges the Role of the Supreme National Security Council (SNSC) In Terrorism, Crimes, and Warmongering 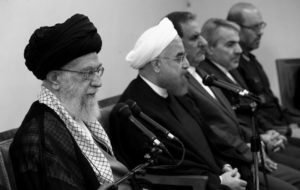 Rouhani: Offensive operations that must be carried out somewhere are adopted in SNSC and approved by Khamenei. All important issues in the region, Iraq, Syria, Afghanistan, Yemen, Lebanon, were decided in the SNSC
Zarif: Ambassadors and Foreign Ministry have a security structure; the Foreign Ministry’s agenda has been political – security from the beginning

The Iranian Resistance has repeatedly stated that terrorist operations, including in Albania (March 2018) and in the Free Iran Summit in Paris (June 2018), have been decided by the Supreme National Security Council (SNSC) and approved by Khamenei.

At a cabinet meeting on April 28, 2021, the Iranian regime’s President Hassan Rouhani acknowledged that terrorist operations, crime, and warmongering are decided by the regime’s SNSC in the presence of the heads of three branches and political and military leaders and approved by Khamenei.

“Our country has an exact system and framework,” he said. “All the complex issues of foreign policy and the field of defense are discussed in the Supreme National Security Council, whether when we want to [carry out] a defensive operation and whether when we have to carry out an offensive operation somewhere or whether when we want to undertake important political task … They will definitely be discussed in the SNSC. The SNSC was set up to allow the heads of the three branches to be present and the military and the government branches to come together. Military commanders and political officials are there. We discuss, and finally, the Supreme Leader must approve our decision, so we have no problems; we may have differences of taste and disagreements, but in the end, it is discussed and decided in a council. All important issues in the region, whether in Iraq, Syria, Afghanistan, Yemen or Lebanon, were discussed and decided in the SNSC.”

In the leaked audiotape, the regime’s Foreign Minister Javad Zarif underscores, “Most of our Foreign Ministry ambassadors have a security structure. Our Ministry of Foreign Affairs has been facing security issues since it began operating. The Foreign Ministry’s agenda has been a political-security agenda since the beginning of the revolution. In the 1990s, they closed down the Ministry’s economic directorate and instead created regional directors whose tendencies were more political and security-related.”

Zarif had previously stated during the November 5, 2018 session of the parliament, “We are not an entity that acts on its own … Can we do something in this country without reporting?” “It is not the case that we wanted to do anything against the Supreme Leader’s wishes,” he added.

Over the past three decades, the Iranian Resistance has repeatedly stated that criminal terrorist operations, including a terrorist plot against the Mojahedin-e Khalq (PMOI/MEK) Nowruz gathering in March 2018 in Albania and the Free Iran Gathering in Villepinte, Paris in June 2018, had been approved by the SNSC, chaired by Rouhani and in the presence of the IRGC commanders and the ministers of Foreign Affairs and Intelligence, and approved by Khamenei.

These developments reconfirm that any theorizing about the lack of awareness on the part of Khamenei or Rouhani and Zarif and other regime leaders about terrorist crimes has no purpose other than to cover up state-sponsored terrorism and help the regime evade the consequences of these major crimes. Khamenei, Rouhani, Judiciary Chief Ebrahim Raisi, Parliament Speaker Mohammad Baqer Qalibaf, Javad Zarif, Intelligence Minister Mahmoud Alavi, and other regime leaders directly involved in the 1988 massacre of political prisoners, the murder of demonstrators, the export of terrorism, and warmongering over the past few decades must face justice for crimes against humanity.

Secretariat of the National Council of Resistance of Iran
April 29, 2021