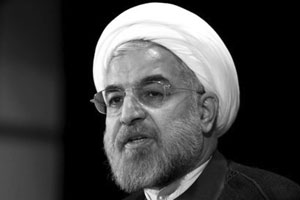 Mullah Rouhani, the President of the religious fascism ruling Iran, hideously supported the atrocities of Bashar Assad at the General Assembly and during his other remarks in New York. He portrayed the regime’s lethal meddling in the region as combating terrorism. This brazen defense of the greatest crime of the century, especially in a place where diplomatic rhetoric is prevalent, again drives home this reality that Rouhani is no different from Khamenei or other factions of this religious fascism when it comes to the fundamental policies of this regime such as export of terrorism and fundamentalism; a point that the Iranian Resistance has been making from day one.

The President of a regime that its foreign policy linchpin is export of terrorism, warmongering, hostage-taking and blackmail, stated at the UN General Assembly: “We propose that… no country be allowed to use terrorism for the purpose of intervention in the affairs of other countries… As we aided the establishment of democracy in Iraq and Afghanistan, we are prepared to help bring about democracy in Syria and also Yemen… we may now devise a plan to resolve the problems of a shattered Middle East under the claws of brutality and savagery.”

The president of a regime that its leaders acknowledge its survival is contingent on the survival of the Syrian dictator, said in an interview with CNN on September 28: “In Syria, when our first objective is to drive out terrorists and combating terrorists to defeat them, we have no solution but to strengthen the central authority, central government of that country as the central seat of power… I think today everyone has accepted that President Assad must remain so that we can combat the terrorists.” When asked why his regime is supporting a man that “has killed 250 thousand of his own people, sent 10 million of his people scrolling around the country for safety; leaving the country… a man who many say is responsible for ISIS, Daesh in the first place” he responded: This is the interpretation of U.S. and the West. He referred to Syria’s support of the regime in the war with Iraq and said: “Syria in the region is considered and is one of our oldest friends.”

Associated Press reported on the press conference that was held on September 25 in New York: “Rouhani defended the government of President Bashar Assad from charges of brutality in dealing with its opponents. He denied any knowledge of the use of ‘barrel bombs’ against civilians in Syria’s civil war, but suggested that Damascus [Bashar Assad] was entitled to use whatever it has at its disposal to counter terrorists.” He noted that “world powers were wrong to try to keep Iran out of the discussions on how to deal with the threat [of ISIS]”. These are statements of the President of a regime that the Iranian people call the “Godfather of ISIS” and the nations in the region have dubbed it “Abu Daesh [father of ISIS]”.

While it is common knowledge that over 90% of Syrian refugees have escaped Bashar Assad’s bombings, suppressive measures, or forced recruitment for his army, Rouhani told CBS in an interview before his trip to New York: “Look, in a county where a large segment of the country has been occupied by terrorists, and there is bloodshed inside the country, millions of people have been displaced, how is it possible that we fight the terrorists of this country without supporting and helping the government of that country? How can we fight the terrorists without the government staying?”

These are the statements of the representative of a regime whose revolutionary guards and proxies have drenched the region, from Iraq to Syria, Lebanon and Yemen, in blood and is the primary element in the slaughter of several hundreds of thousands of innocent people in Syria and Iraq and for driving half of the Syrian population and millions of Iraqis out of their homes.

Allowing involvement of the Iranian regime in the deadly crisis of Syria and lack of firmness against the Syrian tyrant would deepen the crisis and prolong and broaden the conflict. The Iranian regime is never the solution to a crisis it has itself created. The primary reason behind the migration of over half of the Syrian people and the flood of refugees to Europe is the crimes committed by Bashar Assad, the Iranian regime, and the terrorist Qods Force. The Iranian regime sees its survival in the survival of Assad’s regime. Khamenei has stressed time and again that Syria is regime’s strategic frontline and Assad should be supported to the end.

Shamkhani, Secretary for regime’s Supreme National Security Council, stated on the burial ceremony of IRGC Brigadier General Taqavi on 29 December 2014: Sick gossipers say these days what do we care about what’s happening Iraq and Syria? If we don’t fight in Iraq and Syria; if people like Taqavi don’t shed their blood in Samarra, we have to shed our blood in Sistan, Azerbaijan, Shiraz and Esfahan. Taqavi and people like him give their blood today so that before we give our blood in Tehran, we need to defend and give our blood in Samarra.”

Secretariat of the National Council of Resistance of Iran
September 30, 2015