Rouhani Takes Pride in Kissing Hands of Terrorists, Supports Belligerence in the Region 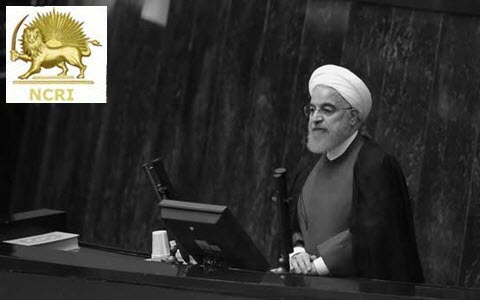 In an address to Majlis (the mullahs’ parliament) on Sunday, December 10, Iran regime’s president praised the Islamic Revolutionary Guard Corps (IRGC) and its mercenary militias in countries in the region and ironically described them as “an element of security” in the region. In his abhorring remarks, Hassan Rouhani said, “I kiss the hands of the combatants of Islam and the combatants of resistance… They secured Syria. They secured Lebanon. God willing in future, they will also secure Yemen. They are endeavoring full force to make the region secure… Today is the day when we must get actively engaged in the region, economically, culturally, and politically.”

The mullahs’ criminal president spoke of regional security while the regime’s officials have blatantly claimed responsibility for the murder of the former president of Yemen. Rouhani welcomed this crime and vowed, “Yemen will be free of aggressors.”

Mohammad Ali Jaafari, IRGC Commander, expressed felicitations on the murder of the former president of Yemen which halted a conspiracy against the Houthis.

Mullah Alam-ol Hoda, member of the Assembly of Experts, Khamenei’s representative and Friday prayer leader of Mashhad, said, “Ali Abdollah Saleh got what he deserved and got killed after a life time of crimes. This was a great victory for us.”

The daily Vatan-e Emrouz, affiliated with the mullahs’ supreme leader Ali Khamenei, wrote, “The power (structure) became solidified in favor of Ansarallah” and in this way “the resistance forces (i.e. the Iranian-backed militias) are going to get their orders from a single command room and will have a practical model and coherent strategy in the region. Today, they have extraterritorial missions… and have been able to merge their missile power and their power in the region and create a suitable blend.”

At the same time, the fourth report by the UN Secretary General published Sunday, December 10, on the implementation of UN sanctions against the clerical regime in Iran, points out that the two missiles fired at Mecca and the Riyadh Airport in late July and early November bore the trade mark of the Iranian “Shahid Bagheri Industries” which is already on the sanctions list of the United Nations.

These facts indicate that all factions of the Iranian regime are fully and actively involved in export of terrorism and belligerence to all countries in the region. What Rouhani describes as “security” in the region is the clerical regime’s reign of terror, death and destruction which has already left millions of defenseless people dead and wounded in these countries. Of course, the clerical regime is the number one enemy of all the people of Iran. This is why the Iranian people and Resistance have resolved to overthrow this medieval regime and replace it with democracy and popular sovereignty.

The Secretariat of the National Council of Resistance of Iran
December 10, 2017