Iran Coal Miners Exploited in the Most Brutal Way Possible 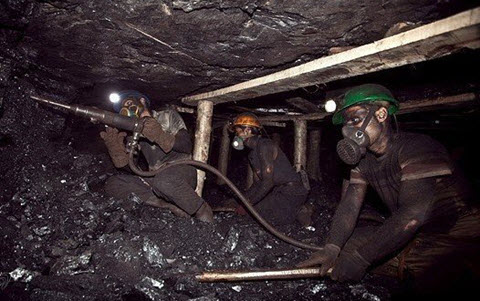 NCRI – Due to using non-standard and outdated safety equipments, there are currently extremely harsh working conditions in Iran’s coal mines, threatening lives of thousands of the country’s coal miners.

“Lives of 13,000 coal miners are in danger”, says head of Iran’s Coalmine Community.

Acknowledging that governments all over the world routinely promote coal mines’ safety standards, he confesses that this has been neglected in Iran, threatening lives of 13,000 coal miners.

According to Mojtahedzadeh, since starting operation in 1966, Iran’s coal mines are still being operated using an outdated Russian technology, with no changes being made ever since (State-run ILNA news agency, December 4, 2017).

It’s been many years now that Iran has been ranked among the world’s worst countries with regard to workplace accidents.

As acknowledged by Alireza Mahjoub, regime’s MP and General Secretary of Worker House, “with regard to workplace accidents, Iran is ranked second or third in the world, which is quite worrying.” (State-run IranOnline website, April 29, 2017)

Its’ obvious that the main cause of workplace accidents is regime officials’ inaction and their ignorance towards workers’ health and safety in factories and industrial units, including coal mines, as exploiting workers is the only thing that matters for regime officials.

The main cause of work accidents in factories, and coal mines in particular, is using non-standard safety equipments, so much so that no equipment or workforce safety standards are met.

This has led to a point where fatal workplace incidents are awaiting workers any moment. The disastrous explosions in Yurt coalmine as well as Boyer-Ahmad Steel Plant are just a few instances in this regard.

Safety status in Minudasht coalmine was so critical that Golestan’s provincial officials had to close it following miners’ protest. Coalmines in Ramyan and Azadshahr were also shut down due to the same reason.

While coal miners are constantly subject to workplace accidents and following the heart-wrenching disasters in Iran’s coalmines, the mullahs’ regime denies any shortcomings and even faults the miners. Regarding the accident in Gloestan province’s Yurt coalmine, regime officials flagrantly put the blame on miners, so that regime’s governor in Golestan announced that “the negligence of a repairer” has caused the explosion in the coalmine.” (State-run Mehr news agency, May 3, 2017)

Regime’s Labor Minister ‘Rabiei’ has also pointed the finger at miners, saying “apparently the coal-carrying locomotive broke down while working 700 meters below ground and the explosion occurred after a battery to battery charger was used to start the locomotive.” (State-run Shargh newspaper, May 3, 2017)

This is while the extremely harsh working conditions make such incidents inevitable in mines that are non-standard and lack any modern equipment.

Despite all these problems and miseries hurting coalminers and in addition to the fact that they’re exploited in the most brutal way by regime officials, they have to work even in two shifts deep below ground. In many cases, miners are forced to work in10-hour shifts, 4 hours more than legally allowed.

Nonetheless, Iranian miners have to work under the most inhumane working conditions imposed on them, only to be paid a meager monthly wage of $150-$200 or $250 at most, which is one fourth of the country’s poverty line. This is one tenth of that paid in many other countries, developed ones in particular. Yet, exploiting miners reaches its peak when we note that they have to work under one-year, six-month, and even three-month contracts, and there are even employers that basically don’t offer any employment contract to poor miners.

Previous article
Rouhani Takes Pride in Kissing Hands of Terrorists, Supports Belligerence in the Region
Next article
Iranians Demonstrate in Paris on International Human Rights Day Against Torture and Executions in Iran