Terrorists, torturers and Revolutionary Guards are Rouhani’s entourage in trip to Europe 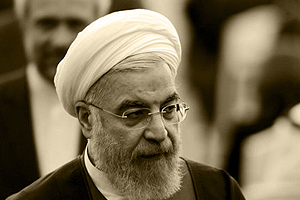 Hassan Rouhani, the president of the religious fascism ruling Iran, will be accompanied by a number of terrorists, torturers and Revolutionary Guards in his visit to Italy and France. These elements, much like him and his cabinet, have been involved in suppression, torture, execution, hostage-taking and export of terrorism beyond Iran’s borders in previous years and decades. The background of some of his entourage is as follows:

1. Hamid Abutalebi, Political Deputy of Rouhani’s Office, had been involved in the occupation of the U.S. Embassy in 1979 and he organized the assassination of Mr. Mohammad Hossein Naghdi, representative of the National Council of Resistance of Iran (NCRI) in Italy on March 16, 1993. In 2014, Hassan Rouhani appointed him as the regime’s ambassador to the United Nations, but the U.S. government refused him a visa and the regime ended up replacing him.

Abutalebi, who is unable to deny his role in the hostage-taking, has opted to play down its significance and depicts himself as the interpreter for the Student Followers of the Imam’s Line. (Khabar Online –March 9, 2014)

The Iran state daily wrote on November 18, 2013: “In 1980, with the occupation of the U.S. Embassy… Mr. Abdi and Mr. Hamid Abutalebi went to Algeria on behalf of the Student Followers of the Imam’s Line and invited 17 freedom movements of the world to Tehran… We held the flag of ‘unity among the world’s oppressed’ in one hand (of Students of Imam’s Line) and 52 American hostages in the other hand.”

According to investigations by the Italian judiciary police and testimonies of witnesses, Abutalebi arranged the assassination of Mr. Naghdi. According to this investigation, Abutalebi who was the regime’s ambassador to Rome from 1988 to 1992 entered Italy with forged documents and an alias at the time of the assassination of Mr. Naghdi to execute this crime. The police investigation notes: “The decision for this assassination was taken by high level political-religious figures in Tehran and its implementation was trusted to a group that entered Italy especially for this purpose. Their organization at the place was in direct contact with the diplomatic representation in Italy and in particular with ambassador Abutalebi.” According to Italy’s judicial police, Abutalebi had been prevented from entering the Schengen region in 2003 as he was suspected to have committed a crime.

In the 1980s, Abutalebi worked at the regime’s embassy in Senegal for some time, but was expelled by that government as a persona non grata.

2. Mullah Hessameddin Ashna, Hassan Rouhani’s cultural advisor and head of President’s Strategic Studies Center, is another companion of Rouhani in his trip to Europe. Previously, he was deputy Minister of Intelligence and Director General of the intelligence in Qom Province. He was appointed Director General of Qom’s intelligence agency in 1992 and played an active role in the suppression of people of that city and dissident clerics, as well as the house arrest of Mr. Hossein-Ali Montazeri, a former heir to Khomeini who was removed from his position for protesting the massacre of the PMOI. This head henchman became Deputy Minister of Intelligence in 1997 and head of the section related to clerics that was tasked with identifying and oppressing dissident clerics.

3. Mohammadi Saeidi, director general of the regime’s shipping lines, is another companion of Hassan Rouhani. He is a torturer of the Intelligence Ministry and was involved in the 1998 chain murders.

4. IRGC member Nazari is another member of Rouhani’s entourage. He is an officer in the IRGC Navy and is after purchasing necessary parts for the IRGC Navy, including special rotors for the regime’s military ships and boats. He used to work through a company called Marine Amir Kabir to purchase the parts needed for IRGC Navy such as engines for its ships from Italy.

Secretariat of the National Council of Resistance of Iran
November 13, 2015