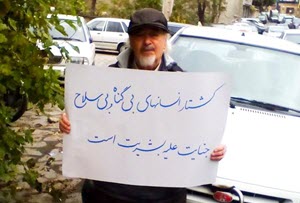 NCRI – Dr. Mohammad Maleki, the first chancellor of the University of Tehran following the 1979 revolution, has condemned last month’s brutal rocket attack against members of the Iranian opposition in Camp Liberty in Iraq which left 24 people killed and dozens wounded.

Dr. Maleki, 83, an outspoken critic of the mullahs’ regime, attended a rally outside the regime’s Notorious Evin Prison in Tehran on Saturday holding a banner which read: “The killing of innocent and unarmed human beings is a crime against humanity.”

Asked what the placard was referring to, Dr. Maleki said: “It refers to the crimes that were committed recently. There were a group of Iranian people who, for whatever reason, were gathered together under the watch of the United Nations. They were attacked with rockets. Some of them were killed and some others were injured, and the place was destroyed. This place is called Camp Liberty.”

Dr. Maleki, 83, is a human rights activist who has been arrested and imprisoned by the Iranian regime many times and is banned from leaving the country.

On October 29, 2015, a barrage of at least 80 rockets were fired by agents of the Iranian regime on members of the main Iranian opposition group People’s Mojahedin Organization of Iran (PMOI or MEK). The attack drew widespread international condemnation including from the United Nations Secretary General and U.S. Secretary of State.