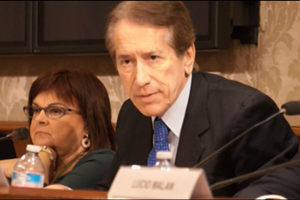 Italian and French leaders should press Rouhani on his worsening human-rights record.

Iran’s President Hassan Rouhani travels to Europe this weekend, arriving first in Rome and then heading to Paris. It will be his first state visit to Europe, and he is scheduled to meet with several high-ranking officials from both countries.

The trouble is that the Western push for closer engagement with the Iranian regime reflects terrible naiveté about Tehran. It would be different if Mr. Rouhani were presiding over an improving domestic situation in Iran, as some Western leaders would have us believe he is. But the opposite is true.

The Iranian human-rights situation is as bad as or worse than it has been since the mullahs came to power 36 years ago. Since Mr. Rouhani’s election in 2013, more than 2,000 people have been executed. That’s more than during any equivalent period in the past 25 years.

Iran has also long led the world in per capita executions, a disturbing statistic that’s only getting worse. But the regime has also stepped up its arrests and its judicial abuses, including its targeting of activists, dissidents, minorities and others.

Many Western leaders have convinced themselves that Tehran’s willingness to negotiate a nuclear deal in exchange for the lifting of crippling economic sanctions means that it is also prepared to improve its overall behavior. Instead, the nuclear agreement has given the regime added motivation to crack down on Iranian civil society while keeping Western influence at bay. Supreme Leader Ali Khamenei has even banned his subordinates from engaging in any further negotiations with Washington. His attitude toward Europe is hardly better.

By welcoming Mr. Rouhani, Europe is giving the impression that it is willing to talk about oil deals and trade partnerships even if it means actively ignoring Iran’s worsening human-rights situation, its sponsorship of terror and destabilizing activities in the Middle East. Such deals, along with the lifting of economic sanctions, will give the regime the money it needs to continue funding the Islamic Revolutionary Guards Corps, Iran’s adventurism in the region and its domestic repressive apparatus.

The Rouhani administration’s national budget reflects these priorities, boosting the IRGC funding by about one-third while allowing real incomes for Iranian school teachers to sink further below the poverty line. This isn’t the behavior of a regime that is moving toward moderation. The IRGC is the main agent of domestic repression and the mullahs’ instrument for exporting their Islamic Revolution abroad.

It isn’t too late to reverse the situation. Italy, France and the European Union should commit to using Mr. Rouhani’s visit not just to explore new investment opportunities, but also as an opportunity to confront him about his country’s the human-rights situation.

The only reasons Western countries should have for meeting with the Iranian president are to challenge his domestic and foreign policies and to make it known that Western investment and sanctions relief will be shut off if Tehran fails to release its political prisoners and safeguard the rights of its citizens.

Rome‎and Paris should also underline to the Iranian leadership that an urgent policy change is expected: Hate propaganda, incitement and threats against other countries in the region, as well as racist and intolerant statements by Iranian officials, must stop completely.

If Mr. Rouhani passes through Europe with hardly a word of criticism for his government’s human-rights record, Tehran will only be encouraged to believe that it is still free to suppress dissent and consolidate power within its borders so long as Europe sees the prospect of healthy profits. That would be both immoral and politically wrong.

Mr. Terzi is a former foreign minister of Italy.