Tricks of Iran Regime’s Intelligence, Records of the Arrested Agent in Denmark 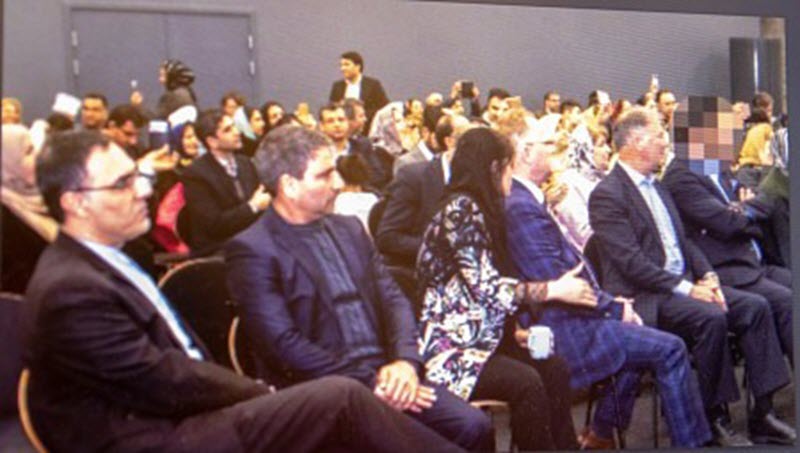 Mohammad Davoudzadeh Lului, 39, a Ministry of Intelligence officer has been serving Iran’s Ministry of Intelligence (MOIS) since 10 years ago. He was arrested at the Göteborg airport in Sweden on October 21, 2018, at the request of the Danish government when he returned from Iran. He was under prosecution for participating in a terrorist plot against Iranian Arab citizens in Denmark.

His active communications with Iran’s ambassador and embassy in Norway once again proves the fact that embassies and agencies of the clerical regime and its diplomats actively engage in terrorism and spying by using diplomatic facilities. A significant number of agents of the terrorist Quds Force and the infamous Ministry of Intelligence are conducting crimes in various countries around the world under diplomatic cover, and in turn, administer and feed networks of the regime’s agents under different excuses. In recent months, in addition to Assadollah Asadi (regime’s diplomat in Austria) who is imprisoned in Belgium, two terrorist diplomats from the Netherlands and another terrorist diplomat from France were expelled from these countries.

1- Davoudzadeh, born in Ahvaz and a resident of Isfahan, was dispatched to Norway in 2008 pretending to be a refugee to acquire Norwegian citizenship. This provided him with a lot of facilities for performing the duties assigned by the MOIS. Despite his legal asylum status, he has traveled to Iran many times. This act is considered as a betrayal to all refugees and, in accordance with the Geneva Convention and the Norwegian laws, would permanently abolish his asylum status.

2- Davoudzadeh was in active communication with the regime’s embassy in Oslo and Ambassador Mohammad Hassan Habibollahzadeh. On November 9, the Norwegian media published his photo at a meeting in the ceremony of the regime’s embassy on the occasion of the Iranian New Year of 1397, while this agent is on the front row next to Norway’s then Minister for Fisheries Per Sandberg, and a female Iranian agent named Bahareh Heidari (Letnes), and the regime’s Ambassador is there as well.

It is worth reminding that the Iranian regime had tried hard to trap the Norwegian minister through the same woman, and he repeatedly went to the regime’s embassy without the consent of the Norwegian government, and had travelled to Iran too; an issue which ultimately led to the resignation of Per Sandberg from the government and his party. Trapping through female agents is a filthy and known tactic of the regime’s intelligence in Norway and other countries.
3. Davoudzadeh was tasked with approaching the PMOI and the NCRI in Norway last year. In order to gain some credit, the said agent referred to the PMOI supports in Oslo, who had participated in a rally to expose the regime, and asked them to link him to the PMOI.

Finally, one of the PMOI members in Oslo met with him in a cafe and questioned him. Subsequently, due to significant contradictions in his speeches and records, it became clear that he was not a dissident and most probably he was on a mission and had set up front companies to this end.

4. Further investigations increased the probability of his mission and being an agent. Then in February 2018, the issue was discussed in detail with the authorities in Norway to prevent further espionage and terrorist conspiracies. In the following months, this agent again contacted some of the PMOI supporters trying to attract their attention by tactics such as claiming to have important information and willing to provide it to the PMOI, which was ignored.

5. One of Davoudzadeh’s missions in Oslo was the formation of front commercial companies and associations for spying and preparing the ground for terrorist acts and bypassing sanctions. For example, along with two others, by the names of Marjan Gharib (a relative of Davoudzadeh) and Parviz Khodabandeh Shahraki, he set up an association named as the Norwegian-Iranian Friendship Association with the registration number 919663235. In order to transfer some banned equipment and goods to Iran through Davoudzadeh, the Iranian regime’s intelligence set up front companies in Bam, as a quake-stricken city requiring construction and special assistance. To this end, Davoudzadeh met and coordinated with the manager of Eghtesad Nowin Bank in Tehran to circumvent the sanctions. In addition, in coordination with the regime’s embassy in Oslo, he provided some facilities for the Bam soccer team to visit Norway, and worked closely with Imami, the embassy’s interpreter.

6. The regime’s intelligence being surprised when this agent was exposed and arrested in Denmark, forced his brother (Mohammad Reza Davoudzadeh) in Isfahan to guarantee that he and other members of his family should keep silent about the arrest of Mohammad Davoudzadeh, and should share with the MOIS immediately if anybody refers or asks any questions in this regard.

7- The state run daily “Iran” affiliated to Rouhani’s clique on November 3, 2018, in order to lose track in an article titled “The need for decisive follow up of the Danish issue” wrote: “If there is any connection between the arrested person with the Iranian citizens… it is clearly beyond the country’s officials knowledge, and in such case, a decisive action is necessary to root out such arbitrarily actions. Past experience in the chain murders case showed that in some occasions there are forces who act arbitrarily and the government and officials have to pay the price…in all such anti-establishment cases we have to find the trail of the Israeli intelligence in collaboration with the PMOI.”

This is while Javad Zarif the mullahs foreign minister, in response to one the deputies in Majlis on November 5, 2108 who had questioned him about the secret annexes of the nuclear explicitly said: ~We are not a system which would act arbitrarily… it is not possible to do anything in this country without reporting it.”

On the other hand the Danish daily newspaper Jyllands-Posten based on a booklet obtained from the mullah’s embassy in that country wrote: They have obtained a booklet from the Iranian embassy which contains the names of some Iranian exiles who have been referred to as terrorists… two former heads of the intelligence apparatus believe that this booklet is a kind of terror list. The Danish politicians have asked for investigation about the Iranian regime’s “Death Lists.”

8- The activities of the MOIS in Norway are specifically coordinated and controlled by Mohammad Hassan Habibollah Zadeh the mullah’s ambassador to that country. According to allocated tasks, the MOIS pays special attention to Norway because of the “official presence of the PMOI and NCRI” in that country and the anti-espionage directorate of that ministry follows all the related issues.

Considering the terrorist plots of the MOIS in Albania, Belgium, France, the United States and Denmark, and the arrest and expulsion of diplomat terrorists, the Iranian resistance once again emphasises on the immediate need of the inclusion of the MOIS in the US and EU terror lists as well as the arrest, punishment and expulsion of the agents of the religious fascism.

Previous articleThe Guardian: A Mouthpiece of the Iranian Theocracy?
Next articleIran: Rouhani’s Ridicule in Minimizing the Effects of U.S. Sanctions