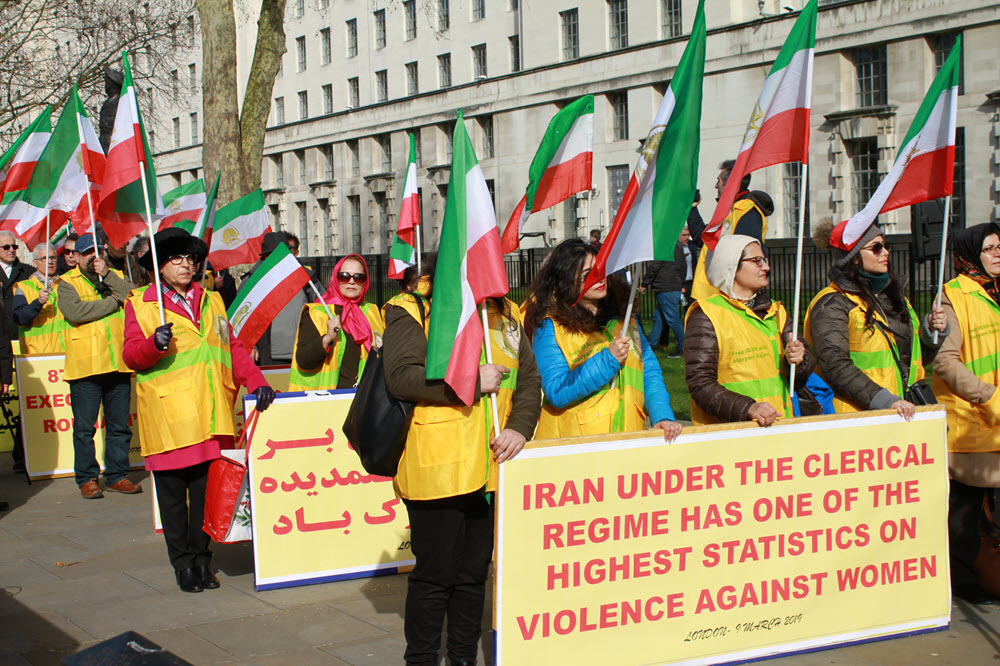 Highlighting the decisive role of women in Iran protests, they call on the UK Government to support the democratic aspiration of the Iranian people led by the Iranian Resistance

Members of the Anglo-Iranian Communities and supporters of the National Council of Resistance of Iran organised a rally outside Number 10 Downing Street in London on 9 March 2019, to mark International Women’s Day.

Hundreds took part at the rally in support of the brave women of Iran who are at the forefront of the ongoing popular protests and strikes against the regime across the country.

In February alone, more than 248 protests in 71 cities and towns were reported from Iran, which is an average of nine protests per day. Teachers, including many women, took part in 13 rallies in February and a nationwide sit-in strike in at least 31 cities in March.

The regime has responded by labelling defence of women’s rights a crime and considers women’s rights activists as “Enemies of the State”. 87 women have been executed since the so-called“moderate” Rouhani took over the presidency in Iran.

In December 2018, the NCRI’s Women’s Committee revealed that, “Only last year, nearly one thousand women were arrested and detained in prisons for their involvement in anti-government protests”. Many were arrested merely for protesting against the compulsory veil in public.

In a further assault on human rights in the country, Iran’s Supreme Leader Khamenei appointed Ebrahim Raisi, as the head of the regime’s Judiciary. Raisi is one of the regime's officials responsible for the massacre of 30.000 political prisoners in 1988 including pregnant women and girls as young as 15-year-old.

Representatives of different Anglo-Iranian Associations addressed the rally and highlighted in their remarks the significant role that women have played in Iran’s freedom movement for over 100 years.

Speakers condemned the regime’s systematic suppression and discrimination against women in Iran that has reduced women and girls to second class citizens. They maintained that contrary to the regime, the organised Iranian opposition coalition, the NCRI and its main constituent the PMOI, recognise and embrace women’s leadership at all levels, providing women a platform to lead the struggle against the theocratic regime.

They stressed that this platform and the courage of Iranian women make them the real force for democratic change in Iran. The Anglo-Iranian representatives, supporters of the Iranian resistance, urged the UK government to recognise the right of the people of Iran and their legitimate Resistance, the NCRI, to overthrow the theocratic regime and establish a free, democratic and secular republic.

“I join you in condemning the appointment of Raisi and urging the UK Government to take the lead and to work with allies at the UN to ask relevant UN bodies to order an investigation and bring the regime's officials like Raisi to justice for crimes against humanity,” Malcolm Fowler, Senior Solicitor and former member of the Human Rights Committee of the Law Society of England and Wales, said.

The call by participants echoed an Early Day Motion from September 2016 supported by 80 cross-party British MPs urging the UK government to act for the prosecution of perpetrators of the 1988 massacre in Iran.

Speakers also called on the UK Government to proscribe the Revolutionary Guard Corps (IRGC) and the regime’s Intelligence Ministry (MOIS) in their entirety as terrorist organisations because they are the main repressive forces behind the intensified domestic repression and recent surge in terrorist plots and espionage against Iranian dissidents, activists and NCRI, outside Iran.

“I support the cause of human rights and democracy in Iran. The appalling situation of women in Iran is why we need reforms and change. So I am here to support your just demands for justice, democracy and freedom”, the Rt Hon. Theresa Villiers, Conservative MP for Chipping Barnet and Former Secretary of State for Northern Ireland, said.

“We stand here today on International Women’s Day to honour Iran’s strong, committed, courageous women in Iran. To the brave women of Iran, who have to endure revolutionary guards harassment, we support you and stand beside you in the struggle for human rights, equality and justice. We salute you, we are with you”, Dr. Jocelynne Scutt, former judge, jurist and university professor at Buckingham university.

“We strongly support the protests by many sectors of the Iranian Society. I am proud that TUC has supported the demands of Iranian workers. I am here to fully support the democratic aspirations of the Iranian people, especially women, led by the NCRI and its president-elect Maraym Rajavi”, said Roger Lyons, Former President of TUC.