Int’l Panel Weigh in on Coronavirus Epidemic in Iran

Renowned physicians weigh in on coronavirus epidemic in Iran—March 15, 2020

Over 20 physicians and medical specialists from seven countries and three continents joined a special international internet conference on Sunday, March 15, focusing on the pandemic crisis in Iran and the reaction seen by the mullahs’ regime that has left the Iranian people defenseless.

The experts examined the scale of the coronavirus outbreak in Iran, the regime’s response to the situation and the solution for solving the fundamental problems of the people. 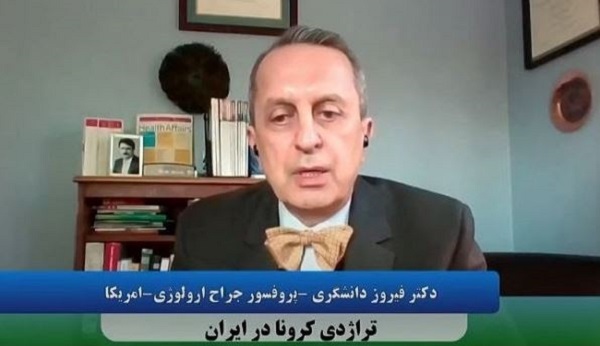 “We will be discussing the policies of the Iranian regime in addressing the coronavirus situation. We know that Iran has had the highest death toll in the world, and this is according to reports by the people,” said Dr. Firouz Daneshgari, a urology surgeon professor in the U.S. 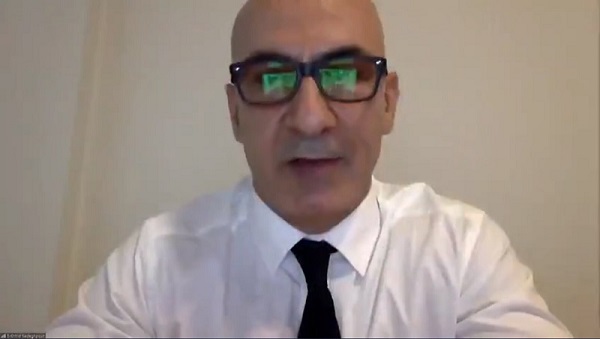 “The policies that Iran has implemented after the first COVID-19 cases emerged in Iran placed everyone in the country at risk. The first case was identified in early February. However, the government refused to cancel the pro-regime rally on February 11 and the sham parliamentary elections on February 21,” said Dr. Omid Sadeghpour, public health doctor in Australia.

“There is no doubt in the incompetence of the regime. Australia has implemented measures to minimize the impact of the virus. It is imposing a 14-day quarantine on everyone who arrives in the country from abroad. Sport events have been canceled. Sanitation is being promoted. The government is also allocating $750 to every person who cannot afford the hygiene measures,” Dr. Sadeghpour added. 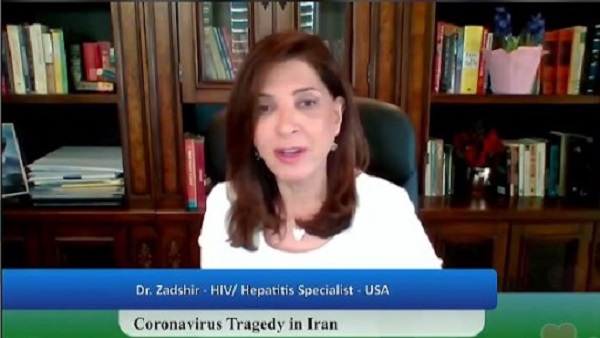 “In all the world, governments have made the battle with the coronavirus their top priority and to keep the exposure of people at a minimum. But in Iran, the first reaction of the regime was to hide information, to cover up, and lack of isolation of the city of Qom, the ground zero in Iran,” said Dr. Zadshir, HIV and Hepatitis specialist in the U.S. “They also continued transportation and flights to China. The mismanagement of medical supplies due to the Revolutionary Guards’ (IRGC) corruption and [Iranian regime Supreme Leader Ali] Khamenei affiliates have caused dramatic increase and spread of the virus and the fatality rate.”

“The only thing that matters to this regime is to keep its grip on power. The people’s lives have no value to the mullahs. The people of Iran suffered the greatest damage and losses as a result of war and domestic issues, poverty, unemployment and illness like you are seeing today,” Dr. Zadshir stressed.

What is the solution?

“I believe the first and most important step is to remove and kick out the IRGC and Khamenei affiliates out of Iran’s hospitals. Medical supplies must be taken out of IRGC’s grip and made available to the public,” Dr. Zadshir said.

Dr. Zadshir also reminded that the international community and health organizations have an obligation to support the people of Iran and the medical staff who are on the front line of the battle against the COVID-19 pandemic. “The World Health Organization (WHO) must especially help the Iranian people and nurses and doctors,” she said. 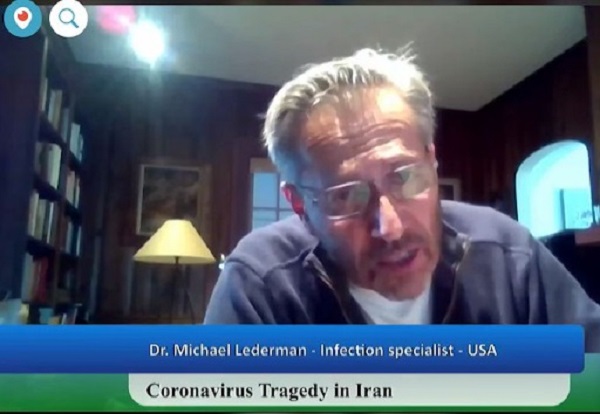 “Even if you don’t have a major impact on the number of cases, if you see them over many months, hospitals will be able to provide care on a regular basis. There are numerous policies that can help,” said Dr. Michael Lederman, infection specialist from the U.S. “We advise citizens to wash their hands, not shake hands, cover when they cough, and social distancing, because the virus is most likely carried in droplets of coughing, sneezing and breathing.”

“At the national level, it’s important to cancel large events. It’s absolutely important that healthcare workers are protected,” he added. “I see no justification for [the biological attack] hypothesis. It’s a bat virus that went through an intermediary host. It was predicted in previous epidemics… Obviously, dealing with a crisis like this requires intervention at multiple levels, and it should be targeted at preserving the health of citizens. Iran’s policies are not consistent with that goal,” Dr. Lederman concluded. 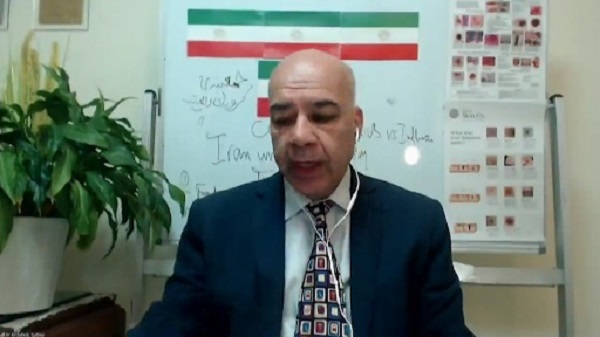 “Hassan Rouhani, the regime’s president, claimed that he does not believe in quarantines and the modern ways of dealing with the virus and social distancing. The message I’m getting from inside Iran is that this is not happening. Unfortunately, the regime has militarized the situation. I have not seen any advanced prevention measures,” said Dr. Ali Zahedi in Australia.

“We know the behavior of the regime in Iran. They compare disasters to other disasters elsewhere in other places in the world. By doing this, the regime really doesn’t mind that the virus is spread across the country and kills people, especially people they consider non-believers. This regime has no roadmap to handle this crisis.” 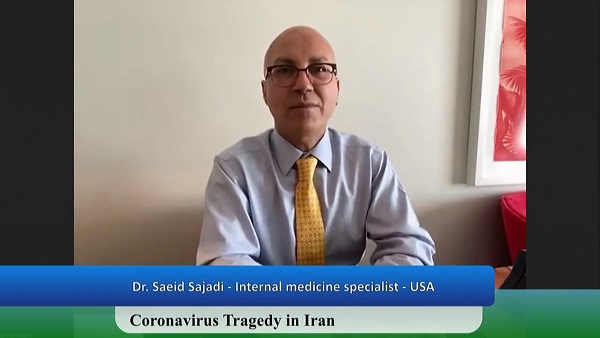 “In all situations, it is the government that provides the actual figures about epidemic spread and death numbers. But Iran is a special case. The regime considers the people as its main enemy. How can it provide figures to the people? The regime also fears that accurate information might cause civil unrest. There was a report in the state-run Resalat daily which said with regard to the number of infected nurses, we can’t reveal the real numbers. These figures are security-related. Even the hospital supervisors are not given statistics. How can we trust the number that this government produces,” asked Dr. Saeid Sajadi, a surgeon in the U.S.

“The main concern of this regime is its survival. The issue is not the virus or health problems. Whatever it does, it’s to manage the risks to its survival. Right now, the Iranian people are dealing with two threats. One is the regime, and the other is the virus. The virus requires distancing. But to deal with the main virus, the regime, they need to get together. This is what they need a solution to,” Dr. Sajadi continued.

“The Iranian regime tries to put certain institutions in charge that will help to suppress the people. By spreading the virus, maybe the regime wants to instill fear in the people and cause them to increase their distance from one another and spread fear,” he concluded. 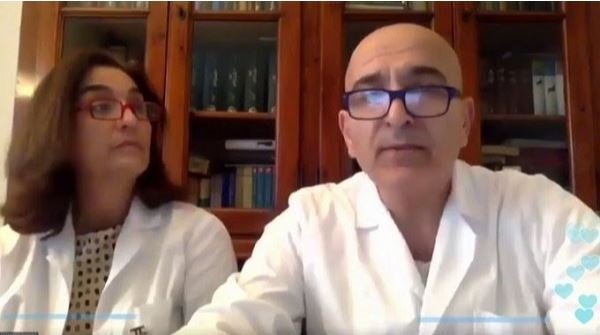 “In all countries across the world, they put specialists in charge. The fact that the regime has given such power to an IRGC commander only means they want to control Iran and every city. This is a social and national crisis,” said Dr. Nariman Nariman, an epidemiologist in Italy.

“The regime knows that the outrage of the people will one day explode and they will hold officials to account. That’s why the regime has established a martial law and has sent military forces to streets in every city,” Dr. Nariman explained. “The fact that the military has been in charge with controlling the situation shows that the regime is only seeking its own survival.” 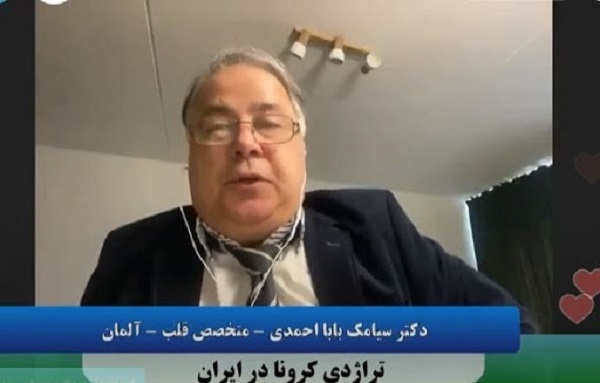 “Given the casualties of this virus, the regime is using a lot of resources to develop biological weapons. The regime will not use its resources to strengthen the healthcare system,” said Dr. Siamak Baba Ahmadi, a cardiologist in Germany.

At the end of the internet conference, the experts discussed about a joint letter which is signed by 100 physicians and it was sent to the director of the WHO. The letter was also mentioned in a briefing held at the Association of Accredited Correspondents at the United Nations (ACANU) on March 12, 2020.

“We seek international support to draw the attention of the World Health Organization and other responsible organizations. What is happening in Iran is nothing short of a genocide. The regime has only put its facilities at the disposal of its own officials and forces,” said Dr. Daneshgari.

“Our group of doctors has an important role to play inside Iran and abroad. This is one of the most critical medical situations in Iran and across the globe,” he added.

Previous articleCoronavirus Fatalities in 182 Cities Exceed 4,900
Next articleTargeting the Mullahs’ Ministry of Justice in Tehran, Office of the Alireza Avaei, Member of the Death Commission During the 1988 Massacre of Political Prisoners